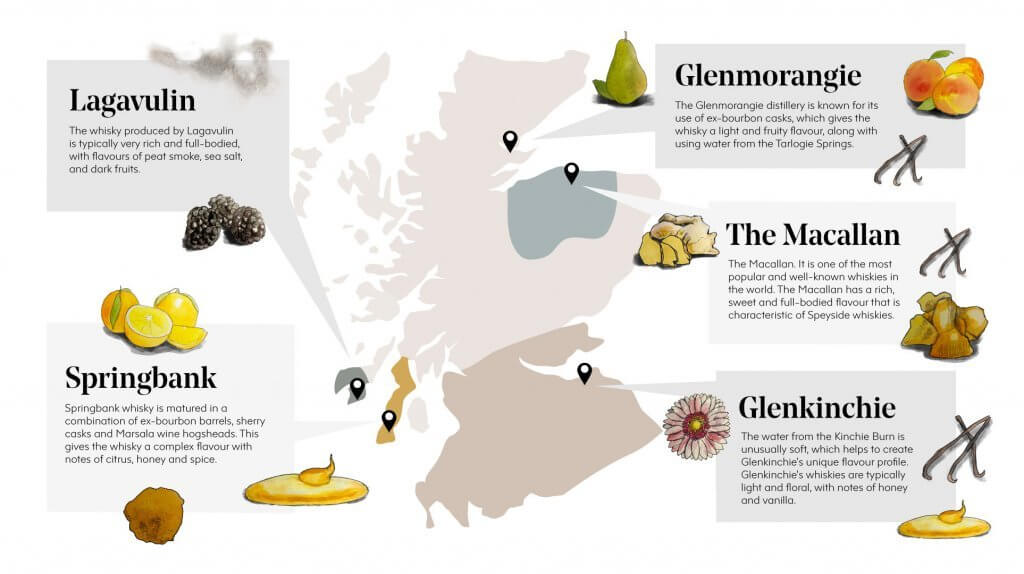 There are five whisky regions in Scotland: Campbeltown, Lowlands, Highlands, Islay, and Speyside. Each region has its own unique style of whisky, due to the different climate and terroir in that area.

In this blog post, we will take a closer look at each of these regions and showcase one distillery from each that exemplifies that region’s whisky style. We will also discuss the flavour differences and terrior differences between each region.

Located in the southwest of Scotland, Campbeltown was once known as the “whisky capital of the world“, with over 30 distilleries operating in the area. Today, there are only three active distilleries in Campbeltown.

Campbeltown’s place in whisky history is due in part to the unique water source that many of the distilleries in the area share. The Campbeltown Loch provides soft water that is rich in minerals, which gives the whisky produced in this region a distinctive flavour.

The first boom in whisky production in Campbeltown was in the late 19th century, when the area was home to over 30 distilleries. The number of distilleries dwindled during the 20th century, with only three surviving today: Springbank, Glengyle, and Mitchell’s Glengyle.

This sudden drastic decrease in the number of Campbeltown distilleries is due to a variety of factors, including prohibition in the United States, over-production, and the Great Depression.

Despite the decline in the number of distilleries, Campbeltown remains an important region in Scotch whisky history. 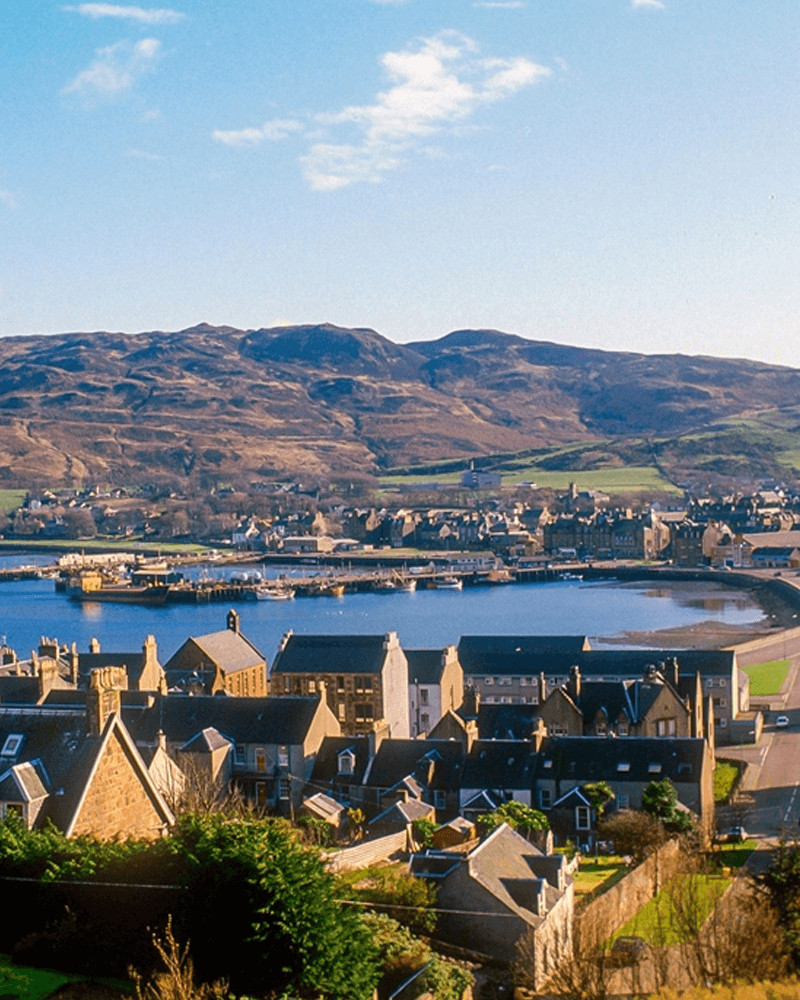 The three surviving distilleries are all highly regarded by whisky lovers.

Known for its unique triple distillation process, which creates a rich and intense flavour.

The only distillery in Campbeltown that uses locally-grown barley. The malt is dried in a kiln heated by peat smoke, giving the whisky a distinct smoky flavour.

The only distillery in Campbeltown that uses triple distillation, leading to a light and fruity whisky, with a hint of peat smoke.

The Highland region is the largest, by area, whisky-producing region in Scotland and is a diverse and rugged landscape, with many different whisky styles coming from this area.

Some distilleries in the Highlands use peat to smoke their malt, which gives the whisky a smoky flavour, while others use different types of wood to give the whisky a more fruity or floral flavour.

It should also be noted that islands like Arran are also covered by the Highlands region. Whisky produced on Arran is often light and fruity with a slight saltiness from the sea air, which makes it distinct from other Highland whiskies.

Some of the most well-known Highland distilleries include Glenmorangie, Dalmore, and Oban. These are all great examples of the different styles of whisky that can be found in the Highlands region. The Glenmorangie distillery is known for its use of ex-bourbon barrels, which gives the whisky a light and fruity flavour.

Glenmorangie whisky is made using water from the Tarlogie Springs, which is said to give the whisky a unique flavour.

The Dalmore distillery is known for its use of sherry casks, which gives the whisky a richer and more full-bodied flavour.

The Oban distillery is known for its use of both ex-bourbon and ex-sherry casks, which gives the whisky a balance of light and rich flavours.

The Lowlands region of Scotland makes up the southern part of the country and is home to some of the oldest whisky distilleries in Scotland. The Lowlands were also historically known as the “granary of Scotland” due to the large amount of grain that was grown in the region.

Whisky production in the Lowlands declined in the early 20th century, but there has been a recent resurgence with new distilleries opening up in the region. Some of the notable Lowland whiskies include Auchentoshan, Glenkinchie, and Bladnoch. 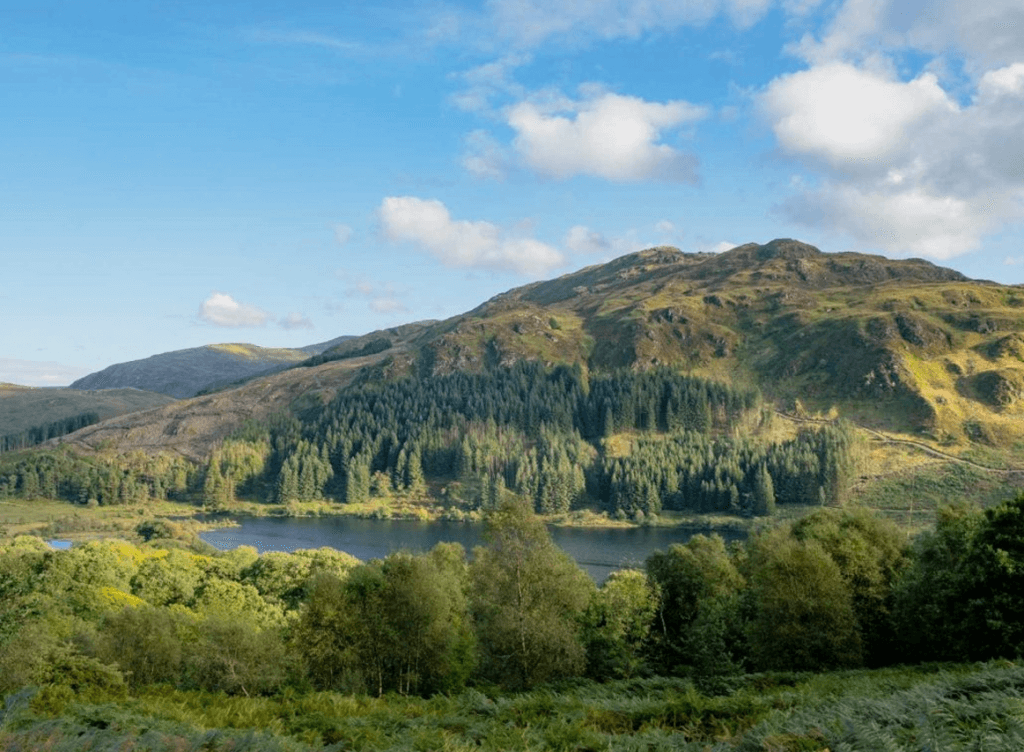 A triple distilled single malt whisky that is known for its light and delicate flavour. The whisky is matured in bourbon barrels, which gives it notes of vanilla and citrus.

A Lowland malt that is distilled in copper-pot stills. The whisky is known for its sweet and malty flavour, with hints of lemon and floral notes.

A Lowland distillery that produces both single malt and blended whiskies. The single malt has a light, fruity flavour with notes of honey and vanilla.

Islay is an island off the west coast of Scotland, and is home to eight working whisky distilleries. The whiskies from Islay are some of the most distinctive and sought-after in the world.

They are typically very peaty, with strong smoke and seaweed notes. This is due to the fact that Islay’s soil is very rocky and sandy, which leads to a lot of peat being present on the island.

Peat is used during the kilning process (the drying of malt before it is fermented), and the more peat that is used, the more pronounced these flavours will be in the whisky.

Despite only having eight working distilleries, Islay is home to some of the most famous and iconic whisky brands in the world, including Laphroaig, Lagavulin, and Ardbeg.

Perhaps the most distinctive of these, with its strong medicinal notes and smokey flavour. It is definitely an acquired taste, but one that whisky lovers around the world keep coming back to.

If you’re looking for a more approachable Islay whisky, Lagavulin is a good place to start. It shares many of the same characteristics as Laphroaig, but is slightly sweeter and not quite as intense.

Another favourite amongst peat-heads, and is known for being one of the smokiest whiskies in existence. It is also incredibly complex, with flavours of chocolate, coffee, and even citrus fruits often being detected beneath the dominant smoke character. 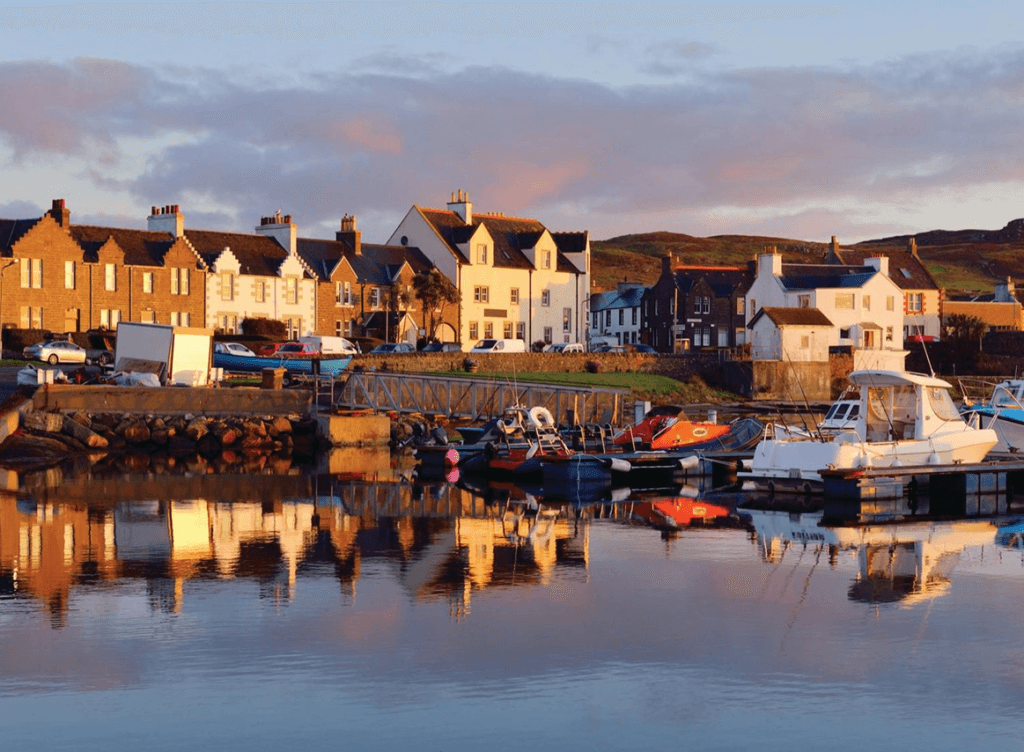 If Campbeltown used to be the whisky capital of the world, then Speyside can lay claim to being its successor. This is because Speyside is home to more than half of Scotland’s malt whisky distilleries, including some of the most famous and popular brands in the world.

The majority of these distilleries produce what is known as ‘Speyside malt’. This type of malt is characterised by its light, sweet and floral flavours.

This is due to the fact that the water used in whisky production in Speyside has a high peat content. This gives the whisky a unique flavour that is different from other regions of Scotland.

Some of the most well regarded Speyside whiskies include The Macallan, Glenlivet and Aberlour. These brands are all produced by world-famous distilleries that have been in operation for many years.

One of the most popular single malt whiskies in the world. It is produced by The Macallan distillery, which is located in Speyside. The Macallan has a light, sweet and floral flavour that is characteristic of Speyside malt.

Another popular Speyside whisky. It is produced by the Glenlivet distillery, which is located in the town of Rothes. Glenlivet has a similar flavour to The Macallan, but it also has a slightly smoky taste due to the fact that it is matured in oak casks that have been smoked over peat fires.

A less well-known Speyside whisky, but it is nevertheless a very good quality malt. It is produced by the Aberlour distillery, which is located in the village of the same name. Aberlour has a rich, sweet and full-bodied flavour that is characteristic of Speyside whiskies.