In order to truly experience the magic of single malt whisky, you need to drink it in the right setting. That’s why we’ve put together a list of the top 10 bars in New York for whisky lovers.

From intimate speakeasies to lively sports bars, there’s something for everyone on this list. The Big Apple is a haven for whisky aficionados, and we’ve brought together some of the best in the city for you to peruse.

So raise a glass this World Whisky Day and join us as we explore the best places in New York to drink whisky!

The interior of Copper & Oak is exactly what you’d expect, a confection of copper pipes and dark wood, with a long bar that stretches the length of the room.

The bar is small and intimate, with a focus on quality over quantity. They have an impressive selection of whisky, both domestic and international, as well as a wide range of cocktails.

The walls are lined with bottles of every type of whisky imaginable, and there’s a real sense of occasion when you’re here. The bartenders are knowledgeable and passionate about their drinks. They know their stuff and are always happy to make suggestions. 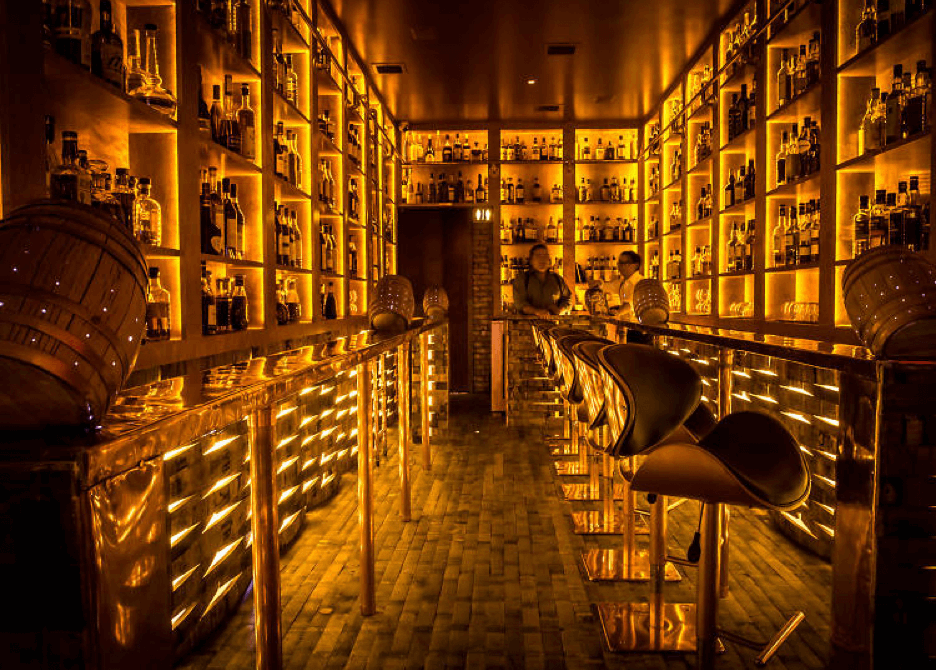 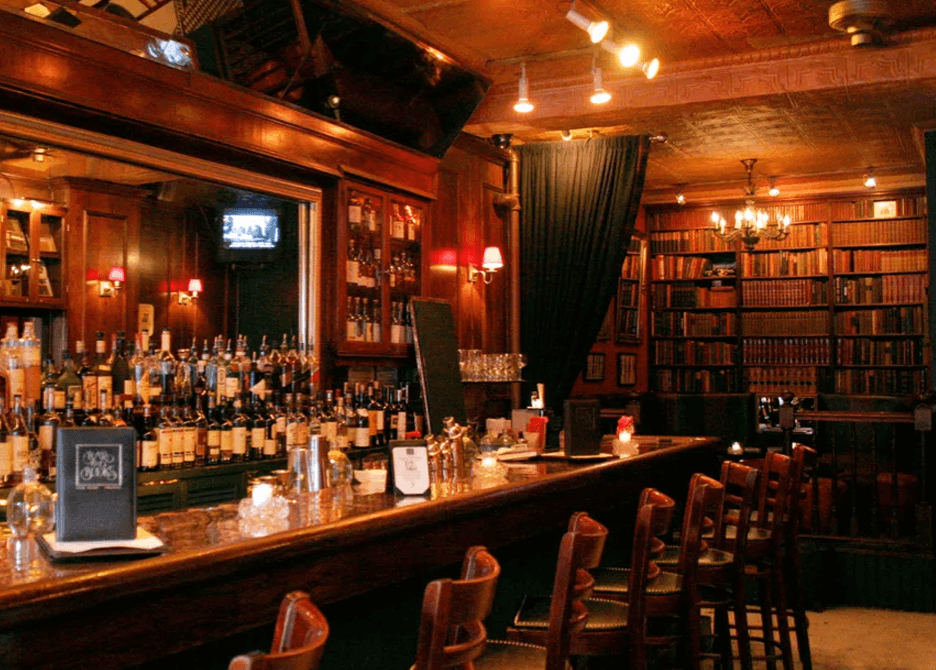 From the boutique to the franchise, don’t let the fact that Hudson Bar and Books has multiple locations across the city fool you; this is a top-notch spot for enjoying a dram.

The dark wood and leather furnishings give it an old-school feel, and the selection of whiskies is impressive. Hudson Bar and Books also offers a selection of fine cigars, if you’re looking to make an evening of it.

Since we’re in the U.S, it would be rude not to include one of the best bourbon bars in New York. Bourbon is a close cousin to whisky, and Maysville does it justice. This modern speakeasy is located in Manhattan’s Flatiron district and boasts an impressive list of over 100 bourbons.

Maysville is an offshoot of the popular Carroll Gardens ‘cue joint Char No 4, and specializes in bourbon, rye and scotch, with a menu that changes seasonally; the food is as impressive as the booze.

Make sure to try one of their cocktails like the Kentucky Colonel (a mix of rye, benedictine, absinthe and bitters) or the Smoked Old Fashioned (bourbon, sugar, angostura bitters and cherrywood smoke). And if you’re feeling really adventurous, order a flight of three whiskies, chosen by the staff to suit your tastes.

There’s also an impressive selection of American craft beers, if you’re looking for something a little different. 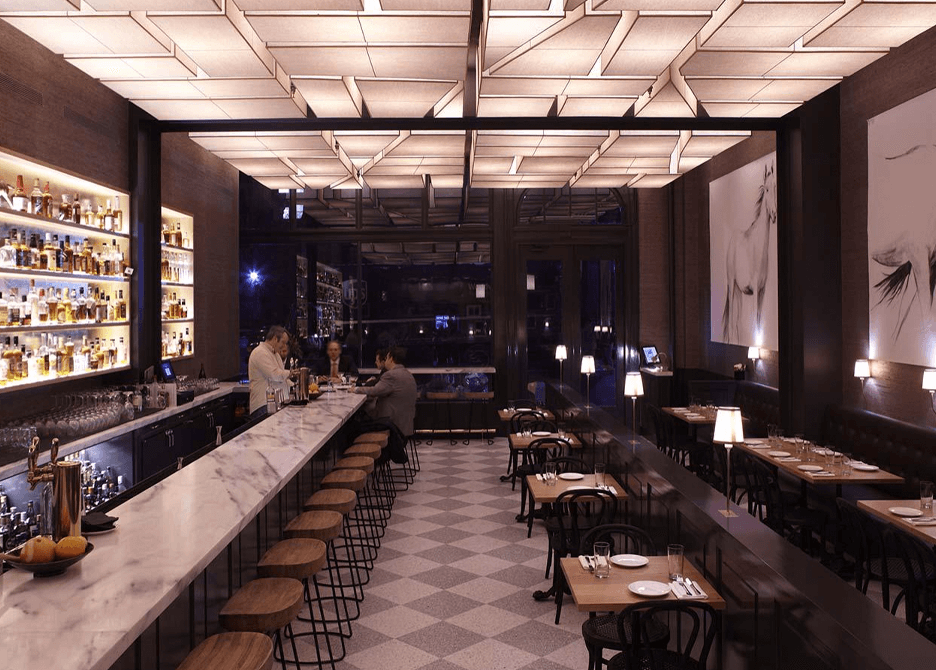 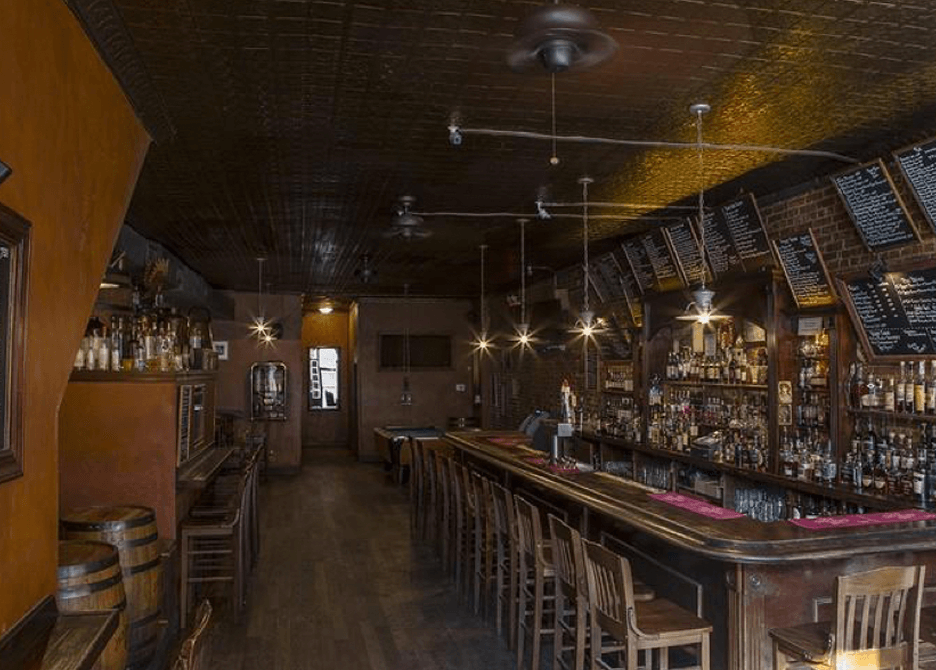 A local favourite, The Whiskey Ward is a cozy spot on the Lower East Side with a relaxed, come-as-you-are vibe. The Ward has an extensive list of both Irish and Scotch whiskies and a number of American bourbons and ryes.

The bartenders are knowledgeable and passionate about their drinks, so you’re in good hands no matter what you order.

And if you can’t decide, try one of their whiskey flights, which come with three half-ounce pours of your choice. You can also enjoy your favourite whisky cocktail.

As you might expect from a good local pub, they offer a menu of solid, well-made pub favourites.

The Dead Rabbit Grocery and Grog

This award-winning bar is inspired by the Irish pubs of yore, with a dark and cosy interior that feels like stepping back in time.But don’t let the old-fashioned vibe fool you – they’ve got one of the most creative menus around, with over 100 different whiskies to choose from. There’s something for everyone here, whether you like your whisky neat or in a creative cocktail.As you might expect, Irish whiskey features heavily, but there is an excellent selection of fine whiskies from Scotland, Japan, and the United States.

And if you get peckish, they’ve got a great food menu to soak up all that whisky. We recommend the Irish nachos – trust us, they’re delicious. 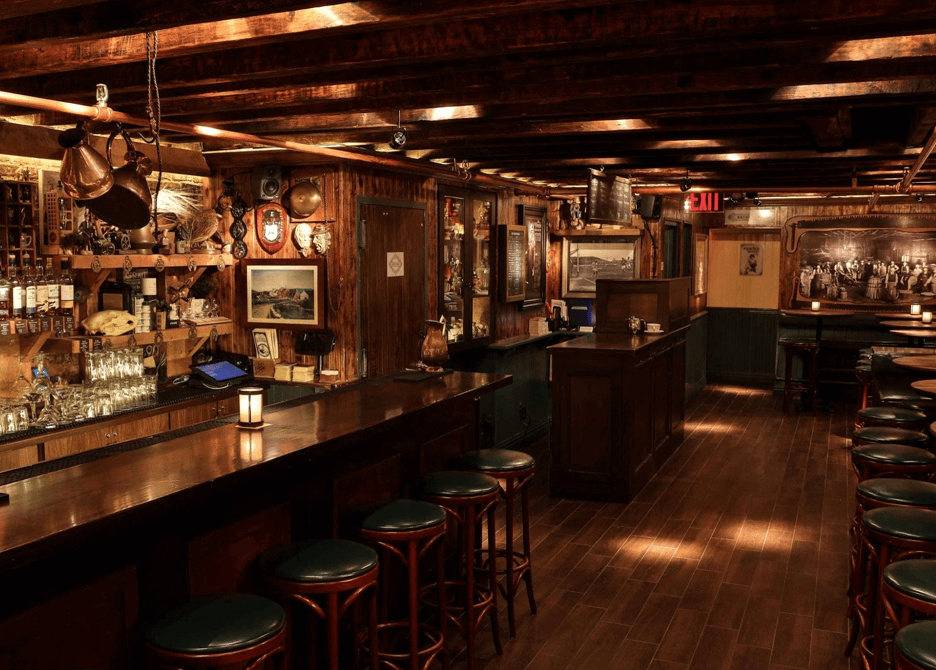 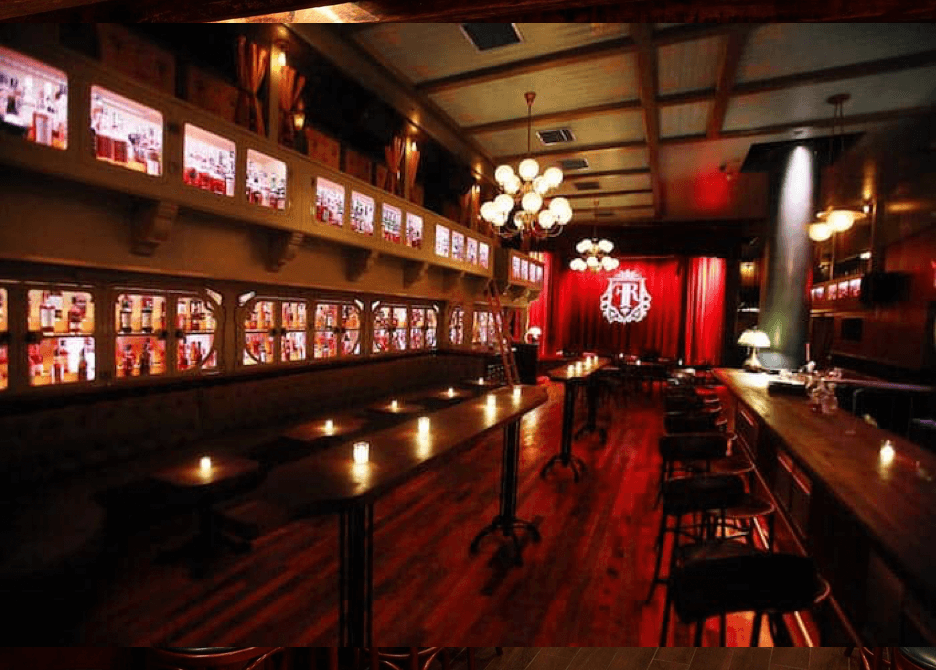 The Flatiron Room is a classic New York speakeasy-style bar, and it just happens to have one of the best whiskey collections in the city over 1000 bottles to choose from, including rare and limited-edition bottlings; you’ll be spoilt for choice.And if you can’t make up your mind, the knowledgeable staff will be more than happy to help you find the perfect dram.

In the style of the setting, there’s also a floor show to enjoy while you drink, with live music 7 nights a week. The speakeasy setting adds an enjoyable level of ambience to help you enjoy the fine whiskies available at this New York icon.

Normally, heavily themed bars are something to be wary of, but the Brandy Library in TriBeCa gets it just right. This is a bar all about, you guessed it, brandy.

There are over 200 different kinds of brandy to choose from, as well as a menu of classic and modern cocktails that showcase the spirit in all its glory.It’s not just brandy, however. For the whisky connoisseur, there’s plenty to choose from and the in-house sommelier is always happy to help you find the perfect dram.

The inside of the bar is style as, you guessed it again, a library, with dark wood panelling, leather armchairs, and plenty of nooks and crannies to get lost in.

If you’re looking for a truly unique drinking experience, the Brandy Library is definitely worth checking out. 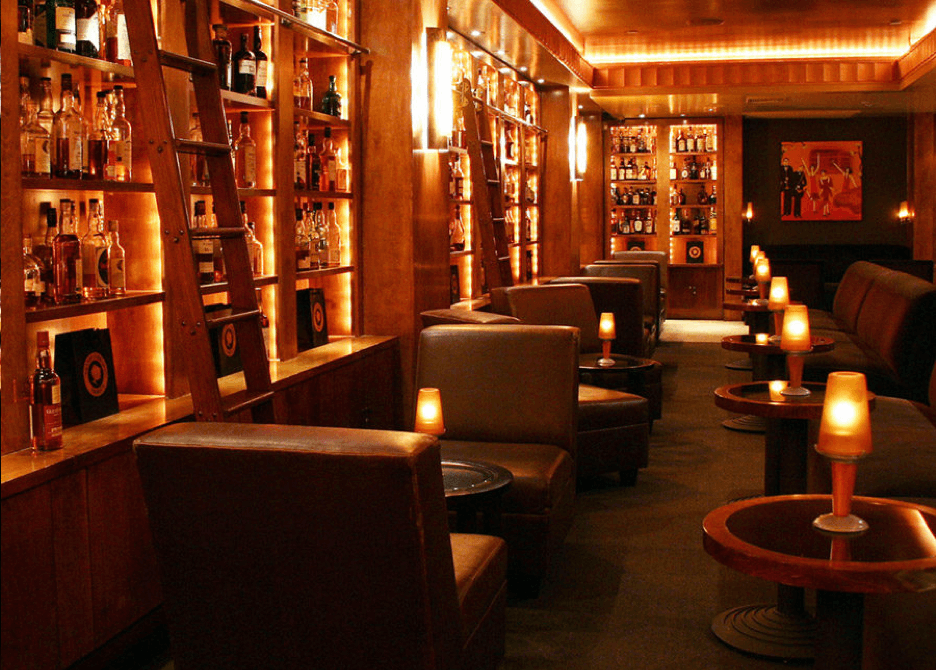 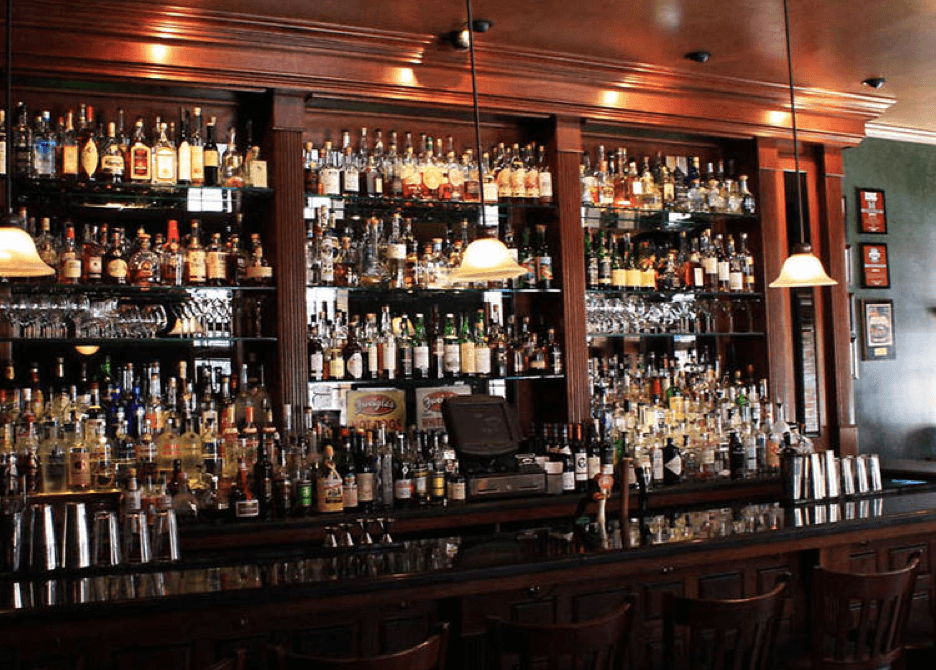 American sports bars are a cultural institution, and there’s no better place to catch a game than at Daddy-O. This beloved spot on the Upper West Side has been serving up cold beers and hearty burgers since 1994 and shows no signs of slowing down any time soon.

With its cosy fireplace, worn leather booths, and walls plastered with sports memorabilia, Daddy-O feels like a second home for many New Yorkers. And its menu of classic American comfort food (think wings, chilli, and grilled cheese sandwiches) is the perfect fuel for cheering on your favourite team.

What Daddy-O has that most other sports bars don’t have is a superb selection of Scotch, featuring over 30 single-malts and some standouts, including a 15-year-old Islay Bruichladdich.

Whilst the Irish Pub is a dime a dozen in New York City, a proper Scottish Tavern is harder to come by. But at Highlands, you’ll feel like you’ve been transported to the hills of Scotland. With its dark wood panelling, antique light fixtures, and tartan-clad waitstaff, this place is the closest thing to a true Scottish pub that you’ll find in NYC.

And, of course, they have an impressive selection of Scotch, featuring 100 whiskeys, which the staff can whip up into some of the best whiskey cocktails in the city.

The menu at Highlands is eclectic, with something for everyone. In addition to traditional Scottish dishes like haggis and shortbread, they also offer American comfort food classics like burgers and fries. 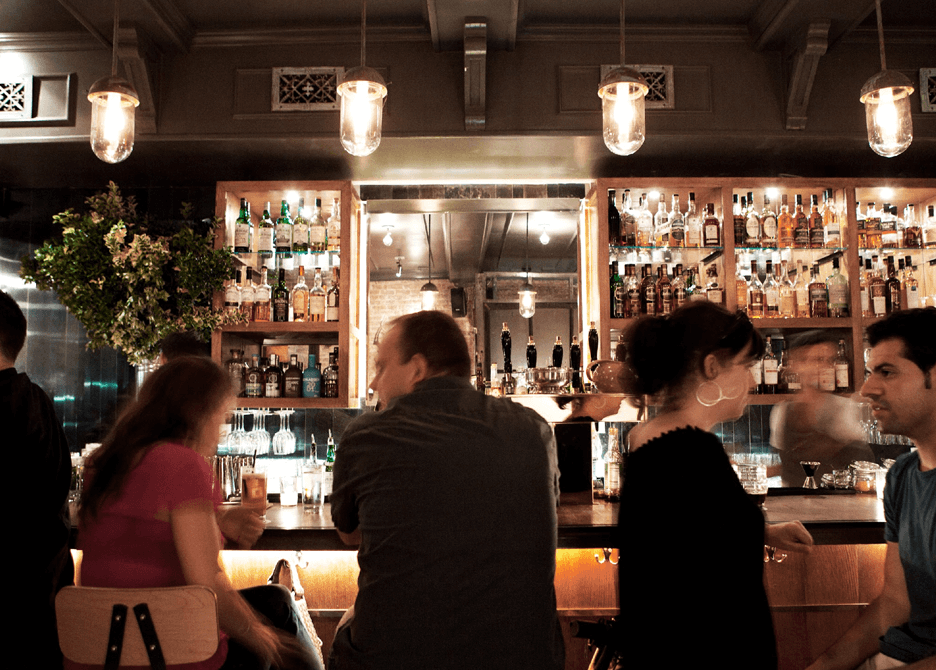 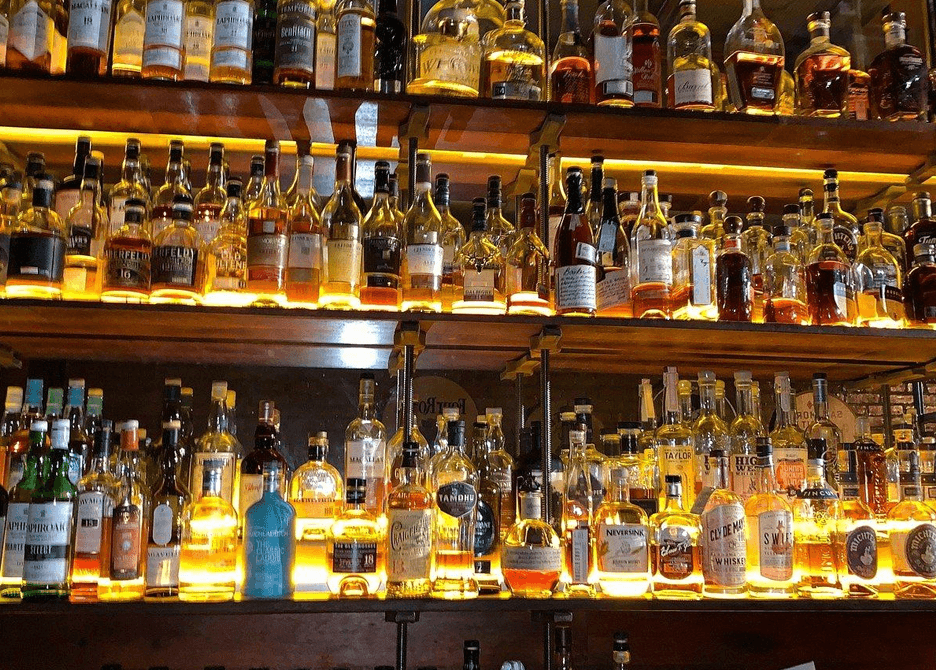 On the Rocks, is a diminutive Hell’s Kitchen bar with a global following. The bar stocks hundreds of whiskeys from all over the world, and they’re always willing to help you find the perfect one for your mood.

The bartenders here are real whiskey aficionados, and they’re happy to chat about their passion with anyone who’s interested. Even if you’re not a huge whiskey drinker, On the Rocks is worth a visit for the great atmosphere and friendly staff.

The best drams in the Big Apple

New York City is home to some of the best bars in the world and, for the whisky lover, the bars listed above are definitely worth a visit. From the world-renowned Copper & Oak to the more intimate On the Rocks, there’s a whiskey bar in NYC that will suit your taste. So, next time you’re in town, be sure to check out one (or all) of these great bars!