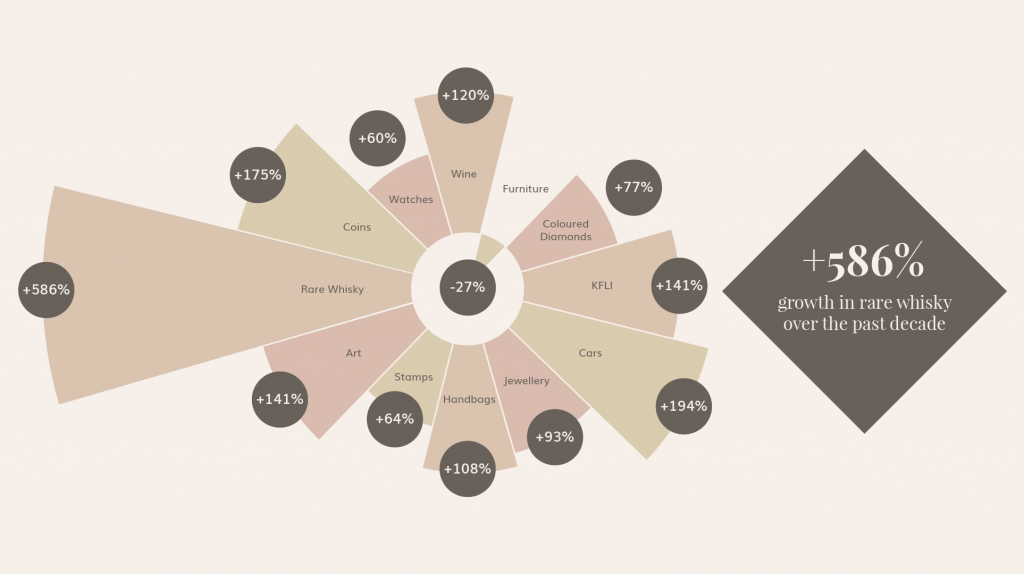 As countries across the world were locked down by the coronavirus pandemic, global markets crashed at a rate not seen since the great depression. The S&P 500 Index lost around one third of its value in just one month.

To put that into context, the losses incurred by the S&P 500 during just the month of March 2020 were as heavy as those experience in the Dot-com crisis and the Sub-prime crisis, which took over a year to decline to. In reaction to what could be considered one of the greatest economic shocks in history, investors have been scrambling to move their portfolios to safer, lower-risk investments. For many, this means investing in the traditional safe haven of gold.

However, for those looking for a more lucrative return combined with market resilience, rare whisky has become a priority, especially in light of the Knight Frank Rare Whisky Index showing an incredible 586% growth over the past decade.

What is the Knight Frank’s Luxury Investment Index?

Tracked on the KFLII, each asset class is weighted to reflect its relative importance and value within the overall selection.

What Does the KFLII Tell Us About the Whisky Market?

The 586% growth record by the KFLII shows us, in simple terms, that the secondary market for rare whisky is booming. Over the past decade, vintage cars (the previous leader of the KFLII) rose by 258 per cent, collectable coins rose by 193 per cent, stamps by 189 per cent, fine art by 158 per cent and fine wine by 147 per cent.  During the same period, rare whisky showed growth of 586 per cent.

This rapid growth proved to be remarkably resilient to the effects of the pandemic. During the same month that saw the S&P lose a third of its value, the value of rare Scottish single malts had risen by three per cent. Over the course of 2020, the value of that same whisky rose by 11 per cent. Indeed, October saw a bottle of Macallan Fine and Rare 60-Year-Old shattered records for the most expensive wine or spirit ever sold at auction when it sold for nearly £1.5 million.

What Are the Drivers of Whisky Market Growth?

One of the primary drivers of the fantastic growth seen in the whisky market is the passion that buyers worldwide share for investing in and collecting some of the most desirable and most exclusive Scotch whiskies ever made.

Traditionally, much of that demand has come from the American market. However, in recent years, Asia has emerged as a huge force in the secondary whisky market. Between 2000 and 2019, the value of Scotch whisky exports to China has skyrocketed from £10 million up to £89 million.

Countries like Taiwan, Singapore and Malaysia also have a rapidly increasing desire for rare whisky. The total value of Scotch whisky exports to Singapore rose to £319.9 million in 2018. Meanwhile, in Taiwan, whisky holds the largest share in the country’s spirits market and the country is the fourth most significant market for Scotch by value.

Additionally, as with gold and fine wine, rare whisky has shown itself to be a remarkably robust market, shrugging on the worst effects of both the 2016 economic crisis and the effects of the coronavirus pandemic. Part of the reason for this is that, as research conducted by the University of South Africa confirms, when usedas an investment, Scotch whisky has no correlation with traditional markets.

While the value per bottle is connected to the popularity of a certain brand, cask whisky continues to gather value as it ages, insulating it from changes in brand popularity. At the same time, not all distilleries sell cask whisky and the bottle market is by far the most visible.

These duel lines of investment, both bottle and cask, offer whisky investors the opportunity to split their investment across two markets that, while interconnected, act as a barrier against the other’s potential weaknesses.

Does This Mean That Whisky Is a Good Investment?

No investment is entirely without risk. For instance, Glenmorangie saw their old whiskies crash by up to 50 per cent in 2010. That kind of bubble forming and bursting that could repeat itself with the current market leader Macallan or any other popular brand- although we believe it to be unlikely.

Increased interest in rare whisky from the Asian market has caused the value of the Apex 1000 index to increase by 30 per cent. The value of the most collectable bottles increased by as much as 62% in 2019.

A bottle of fine wine (also considered an attractive luxury investment) averaged at £165 in 2019, while a bottle of whisky averaged at £377. 2019 saw records broken for the sale of both items, but while a 73-year-old bottle of Burgundy sold for around £430,000, a 60-year-old Macallan Fine and Rare fetched £1.5 million.

The barrel market has also shown significant growth and resiliency. Barrelled whisky kept for at least six years returns, on average, shows no less than 60 per cent profit and outperforms FTSE shares and London property.

In recent years, there has also been a diversification of the whisky industry. Traditionally, Scotch has been considered the market leader for fine whiskies. However, the Japanese Icon 100 Index has seen a 38% increase over the past 12 months and has been declared the best-performing whisky-producing region by WhiskyStats.

While the combination of heritage, geographical identity and brand recognition keeps Scotch prices far higher than their Japanese counterparts, distilleries such as Karuizawa, Yamazaki, and Hanyu continue to develop their reputation for fine whisky. A full 54-bottle set of the Hanyu Ichiro Full Card Series recently sold for a record-breaking $1.52 million at Bonhams’s Fine & Rare Wine and Whisky auction in Hong Kong (I must confess that I passed on the opportunity to buy the same collection for around $700,000 a few years back).

The previous record for the most expensive Japanese whisky collection ever sold had been set around a year before when a Full Card Series sold for $917,000.

While these prices can’t compete with similar collections of scotch whisky, an increase in value of $603.000 over twelve months indicates the kind of appetite buyers have for rare Japanese whisky.

With the world market experiencing some of the most challenging economic conditions seen to date, the rare whisky market shows not only resilience but staggering growth, making it an attractive opportunity for smart investors.

Words by Dennis and Dion
@whiskyconsultants.nl