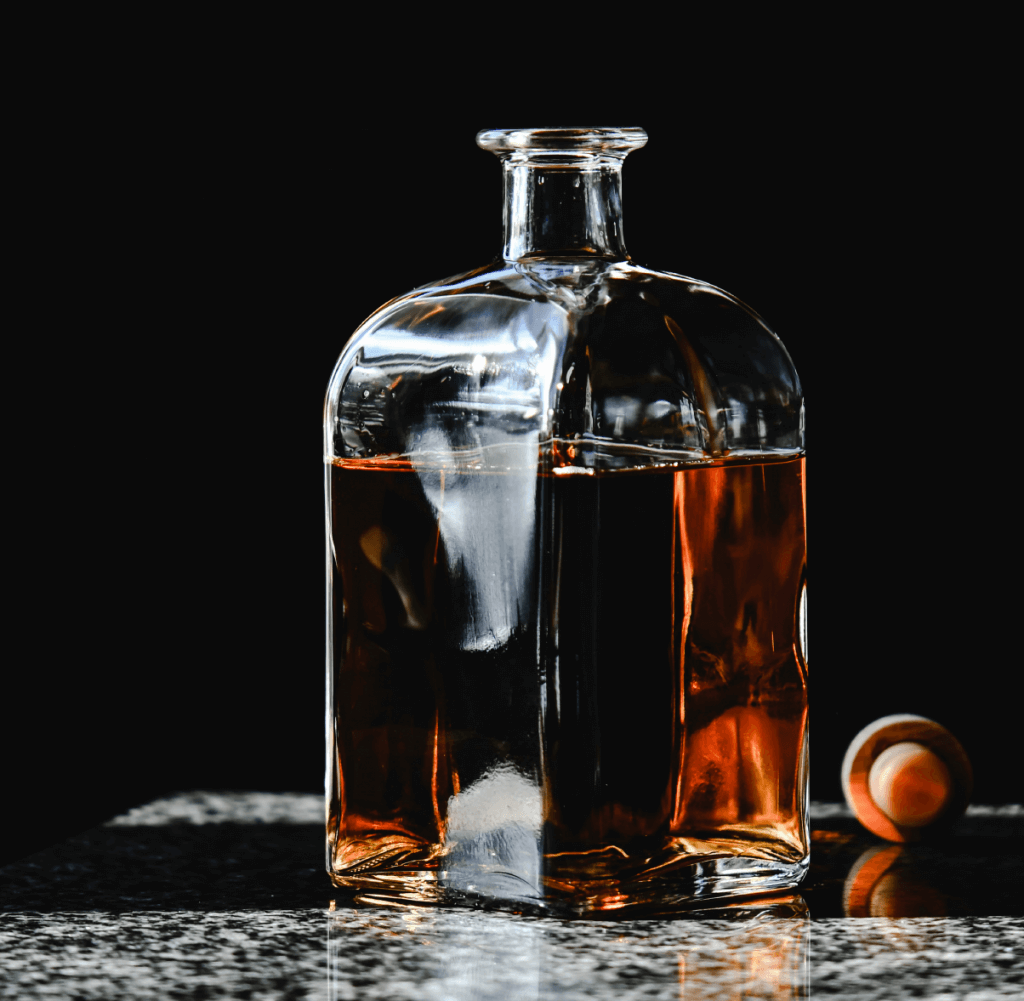 In the world of whisky, a lot is held within a name. Think of the great, long standing distilleries of Scotland, and a few key names will come to mind: The Macallan, The Glenlivet, Glenfiddich, Bowmore or Laphroaig. These distilleries have operated for generations – sometimes even by the same family – and therefore have a painstaking focus on protecting their good name for both the present but also future generations who will rely on the name to equate to quality.

It is no surprise then, that distilleries will also want to work hard to ensure no one is copying their name, or bottles or designs. Many protections are in place to stop new players entering the market from, say, copying the exact shape of a popular bottle or coming up with the same name and there are often lawsuits around this exact issue behind the scenes in the Scotch whisky world.

But this is not a recent phenomenon – the story goes that so many distillers used the name Glenlivet (to denote both the area in which their Speyside whiskies were produced and also due to the growth in popularity of the whisky which we know today under that brand-name) that many distilleries named their whiskies with their own distillery name alongside a suffix of Glenlivet. This was partly due to the fact that before the licensing act of 1823, many illegally made whiskies which were produced in the Speyside region had informally called themselves Glenlivet whiskies, much like those on the Isle of Islay would call themselves Islay whiskies. However, in the late-1800s the owners of the distillery known today as The Glenlivet became frustrated with the fact that they were finding more distilleries located nowhere near the area of the Glen of Livet (from which the name is derived) which were using the suffix simply to boost sales. Many court cases ensued, before it was eventually agreed that a handful of local distilleries could use the suffix Glenlivet – brands like Macallan, Glen Grant, Glenrothes – but not ones further afield on the west coast or southern borders. The brand also become known as The Glenlivet (as in, the one and only) to help separate them from others and it wasn’t until fairly recently that many of those which had historically used Glenlivet as a suffix to their own brand actually stopped doing so. Interestingly, it is said that the Cardhu distillery – the first run by two formidable women, Helen and Elizabeth Cumming – never took on the suffix despite being very nearby to The Glenlivet due to the popularity of the Cardhu whiskies which they produced. It seemed they didn’t need any help along the way!

Scotch whisky distillers have, today, become even more protective due to the increase in popularity of single malt. For much of the 20th century, distilleries sold the bulk of their product onto blenders and brokers who would use a variety of whiskies from many different regions and producers to make up a blend. Therefore, there was less of a pressure on the distilleries to keep a stronghold on their names, as they were selling on the vast majority of their production to others. After all, unless you were a true sleuth or worked behind the scenes at the distillery, what good was it in knowing the names of the whiskies used to make a blend if all that mattered was whether it tasted good – or was marketed well.

But as more distilleries began to push revenue into the single malt space, the more important it became to have a stronghold on one’s name. Today, while the vast majority of Scotch whisky sold globally is still definitely blended whisky, the bigger profit margins of the past decade have come from the sales of single malt. Therefore, it naturally makes sense to be cautious about one’s distillery name and how it’s being used. Reputations are built and broken on the product that is produced, and when it’s being sold globally, distilleries will work hard to protect their reputation within that global marketplace.

And so, behind the scenes many distilleries will have two different names for their whiskies: one which denotes the stock coming directly from the distillery (bottled

Scotch whisky distillers have, today, become even more protective due to the increase in popularity of single malt.

under their own brand name) and one which has either been created to as a secondary name for the brokerage market or gone through a process of ‘teaspooning’ and is therefore only useable in a blended malt whisky. The process of teaspooning has been around for a long time, as it were, but it plays perhaps a greater importance today as the price of distillery own casks rises. The way teaspooning works, is that a distillery will take its own main brand stock and ‘taint’ it with 1% (or perhaps a teaspoon originally!) of whisky from another distillery. That stock is then sent out to the blender to whom they are selling it with a different name than what they would sell their own stock for, in a bid to stop whoever has bought that cask of whisky from selling it on under the distillery’s own name. A good example of this would be The Glenfiddich, which goes by the name Wardhead, when it has been ‘teaspooned’ with some liquid from its sister distillery The Balvenie. This way, if that blender or whisky broker no longer had use for that cask of Glenfiddich single malt, they couldn’t turn around and sell it as ‘The Glenfiddich’ legally speaking.

Many of these deals were historically made over a game of golf and a handshake – the gentleman’s promise went a long way to building trust in the Scotch whisky industry. And generally speaking, it has been a huge boon to the industry that so much trust has been built this way. It’s meant that unlike other markets – such as Japan, where distilleries refuse to trade with each other historically – the Scotch whisky market has been able to weather many storms. If one distillery was down on its luck, it could sell casks to another distillery under the agreement that the stock would not be sold on by the owner, but only used for blending purposes in future. The Scotch whisky industry is one of trading – it’s imperative for the huge array of extremely well known blended whiskies out there which most of the world drinks. Not all whiskies which go into a Johnnie Walker blended Scotch are going to come from Diageo owned distilleries.

The separate route is where distilleries, when they have too much stock in one year, for instance, and want to bring in some revenue by selling off stock to brokers, will release those casks under a secondary name or trade name. This is to help ensure that their own brand names don’t get diluted. An example would be Highland Park, which sells casks of whisky to brokers under the name Whitlaw.

Indeed, this is where the pinch point now comes in. Today, many distilleries are pulling back on selling their stock onto other companies, in a bid to mature as much as they can for future releases. As demand grows for single malt, companies need to ensure they are well insulated to keep on providing liquid for that globally growing appetite. It’s a lesson that many distilleries did not learn early enough, when ten years ago the demand shot up, and a number of distilleries had to pull flagship brands from the shelves because they didn’t have enough stock. Scottish whisky distilleries have learned from that, and are therefore holding back as much as they can for down the line to release when they choose to do so. And if they do release it, there is likely to be growing emphasis put onto only selling on stock which has been ‘teaspooned’ or which goes by a different trade name, so that a cask can’t be sold on the secondary market with no input from the distillery itself.

So it is wise for the cask investor to better understand this space, as Stuart Thom, Director at VCL Vintners, explains.

“It [the practice of releasing trade name stock] is becoming more and more common. I would say the majority of whisky investment companies now have it on their books and recommend it to investors,” says Thom, who adds this practice has really only started increasing in the last 12 months.

“As more whisky investment companies appear, the availability of distillery casks has become less and less, meaning these companies will turn to alternatives such as Blue Hill [from Craigellachie] or Whitlaw,” he says.

The issue here is simply that down the line, investors will not be able to sell that cask on under the distillery’s own name – so even if you know what liquid might be in it, it will not have the same pedigree as something coming from the distillery itself. It would, therefore, perhaps make a great whisky to gift to friends and family, but more challenging to sell onto another buyer.

It’s no surprise that this practice has increased – as Thom says, it’s a good way for distilleries to bring in revenue without relinquishing their distillery stock. And there’s nothing wrong with it either – at the end of the day, it’s still single malt Scotch maturing in that cask (once it’s matured for more than three years and a day, of course). But it is potentially a ‘buyer beware’ tale, to understand more fully what this will mean down the line when an investor tries to offload the stock.

“Many of our clients have nearly purchased casks of Whitlaw under the illusion it was Highland Park for a very attractive price,” cautions Thom.

Only time will tell how much of the cask investment market will have these casks available – the Scotch whisky industry ebbs and flows, and there’s no guarantee that this will continue. But with the continued growth and interest in single malt globally, it’s no doubt wise to try and understand the market and its trends before parting with hard earned cash.

Today, it produces nearly 4 million litres of spirit per annum. In 2015 Bacardi decided to reinvigorate interest in the distillery and released a series of single malts, which are due to be updated again imminently.

The single malt whisky releases are fresh and fruity, with lots of fruitcake notes coming from the finish in European oak ex-sherry casks.