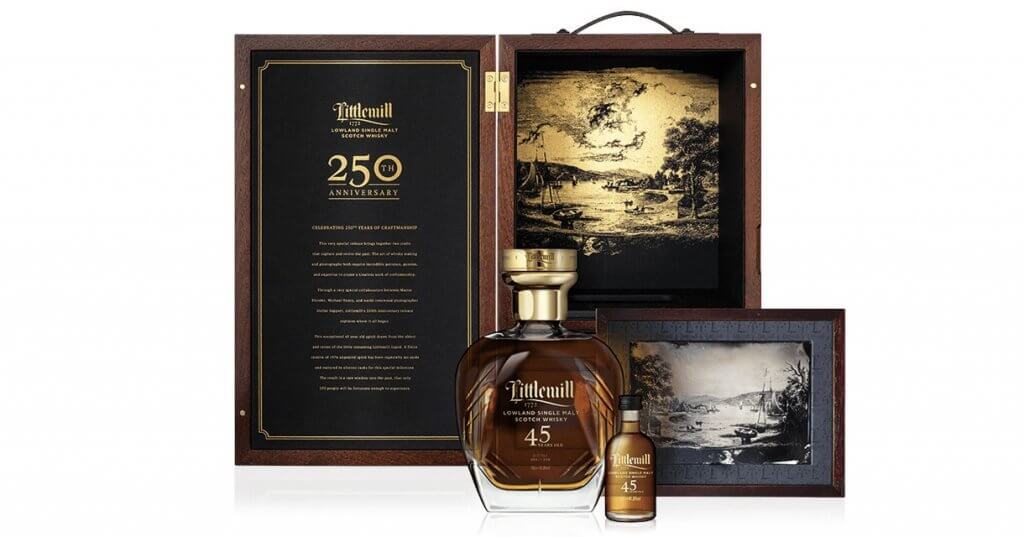 With only 250 bottles available, this is a rare find for collectors and would be a prized possession for anyone interested in owning both a rare Scotch whisky and a piece of Scottish heritage.

Founded in 1772 in Bowling, West Dunbartonshire on the banks of the River Clyde, the Littlemill Distillery was the oldest licensed distillery in Scotland.

In 1773, brothers Archibald and George Buchanan sent an employee, Robert Muir, to meet with the Justice of the peace and receive a license to distill. The distillery then went on to push the frontiers of whisky making in various ways and under different ownership.

In 1823 Jane MacGregor became the first female licensee to run a distillery in Scotland at Littlemill, and it is thought, the world.

In 1931, the first American owner, Duncan Thomas, ceased to use the traditional Lowlands method of triple distillation and instead experimented with malting methods and hybrid stills, eventually converting to a double distillation process and the ability to produce 3 different types of malts, but still with the triple distillation style character. This method was later adopted by other Scottish distilleries.

The distillery went through many changes of ownership and was closed and reopened several times throughout its history. It was dismantled in 1997 and finally destroyed by a fire in 2004, but fortunately all remaining casks had already been given safe housing by the Bulloch family, who were the current owners of the Loch Lomond Group.

Since his arrival at the Loch Lomond Group, master blender Michael Henry has watched over the remaining Littlemill spirit, ensuring what little history remains, is treated with the respect it deserves.

The presentation of this 250th memorial, is therefore 250 bottles, each presented in a unique and breathtaking case resembling a Victorian camera box, and each with a unique numbered photograph, silver on black plate glass of the view from the banks of the River Clyde, where Littlemill once sat. On the reverse of the plate is Stefan’s signature and fingerprints. The bottle is a beautiful handblown Glencairn crystal decanter, etched with cuts representing the aperture of a camera lens.

The whisky in this release was taken from a single distillation on 4th October 1976 and double-distilled in Littlemill’s bespoke straight-neck pot stills. In 1996 it was transferred into American oak hogshead cases before spending the final 6 months in first fill Oloroso sherry hogshead casks

Sitting within the elaborate casings is the rare 45 year old whisky. A beautiful amber colour with floral notes and a luxurious finish; this whisky oozes history.

The Tasting notes are described as:

Floral elderflower and chamomile with grapefruit and lemon zest, deeper sweet notes of toffee with marzipan, almond and vanilla.