10 of the most expensive whiskies in the world

10 of the most expensive whiskies in the world

In this blog post, we will take a look at 10 of the most expensive whiskies in the world. These whiskies come from all over the globe, and they each have their own unique story. If you’re looking for an excuse to spend a fortune on booze, then look no further!

Coming in first on our list is the comparatively low-priced (at least in comparison to some others on this list) 72-year-old Gordon & MacPhail’s Glen Grant. This fine example of a single malt whisky was distilled back in the 1940s, and it spent its entire life maturing in a first-fill sherry butt.

The Bonhams in Hong Kong sale also included the “Year of the Dram 1948” NFT and the whisky in a stunning Dartington crystal decanter and beautiful American Black Walnut wood presentation case. The final price for the set was an impressive £95,000! 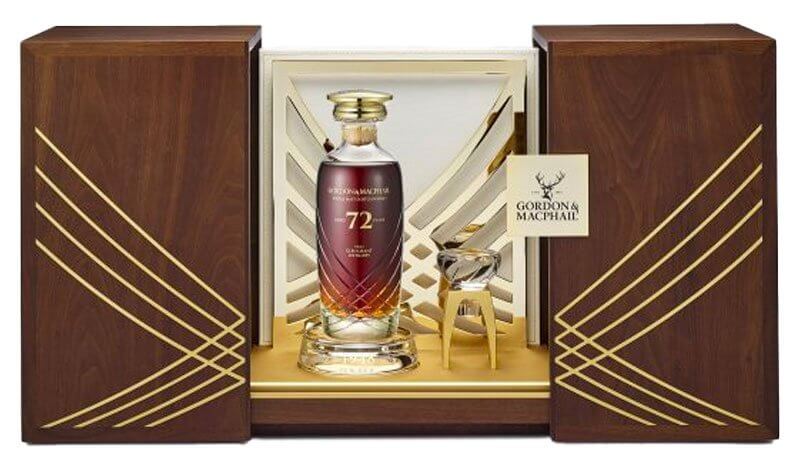 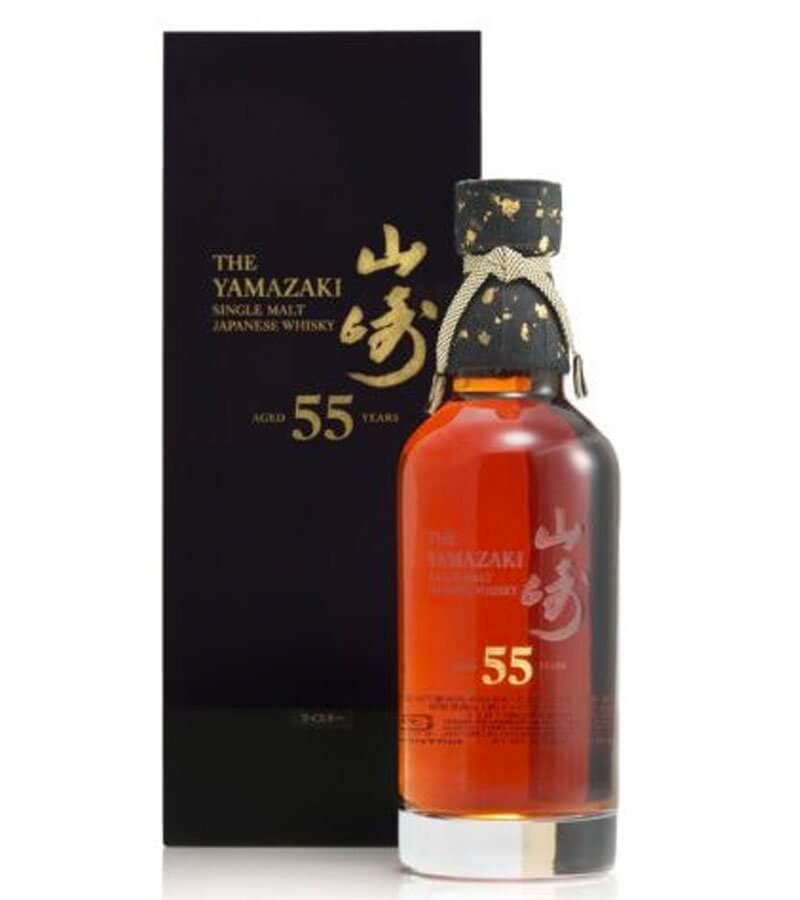 With a sharp jump in price, the sale of this 55-year-old Yamazaki set a world record at the time for the highest sale price for a single bottle of Japanese whisky. Unbelievably, this bottle went for more than 10 times the estimated price!

The Yamazaki distillery is one of the most prestigious in Japan and was founded back in 1923 by Torii Shinjiro. Shinjiro wanted to produce a whisky that would be considered a real contender in the industry, so he hired Taketsuru Masakata as his factory director. Masakata is often referred to as the “Founder of Japanese Whisky”, as he studied the art of whisky-making in Scotland before returning to his home country.

This particular bottle was distilled in the 1960s and bottled in 2015, and features the characteristic amber hue imparted by the white oak and Mizunara oak casks that it was matured in.

Another big hitter from Japan, this set of 54 bottles were released between 2005 and 2014 and is believed to be one of only 4 remaining sets. The Hanyu distillery actually closed its doors in 2000, but the Grandson of the founder, Isouji Akuto, rescued the remaining 400 casks and then personally selected which whisky would be used for each card. 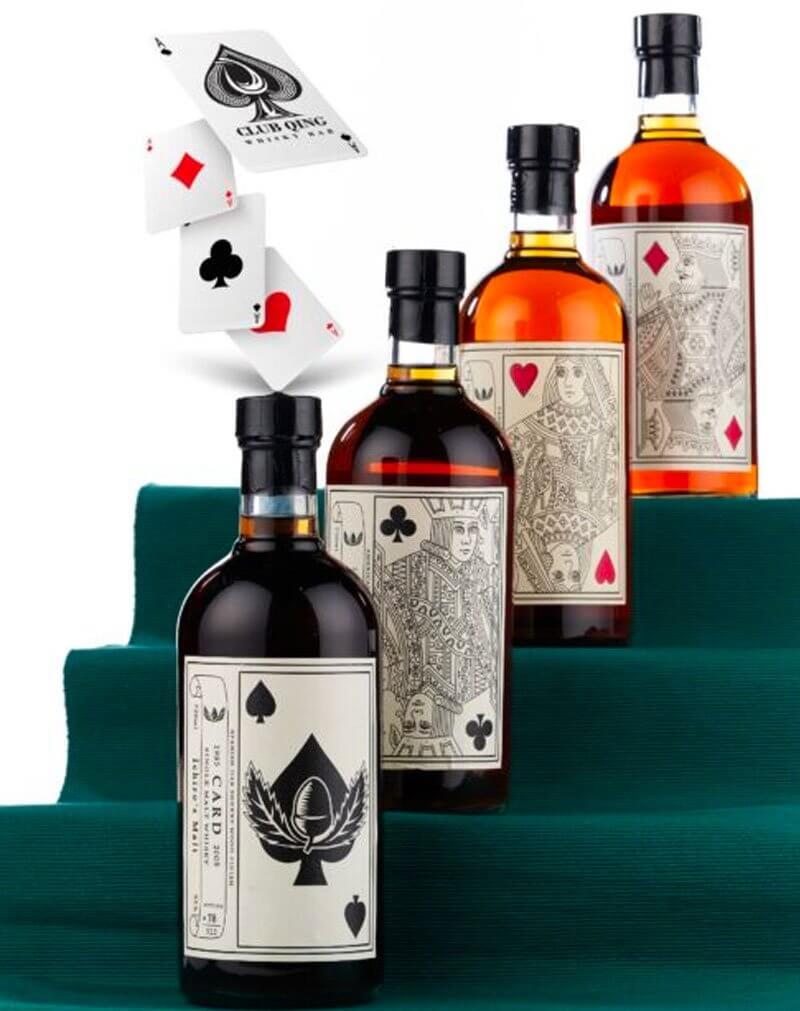 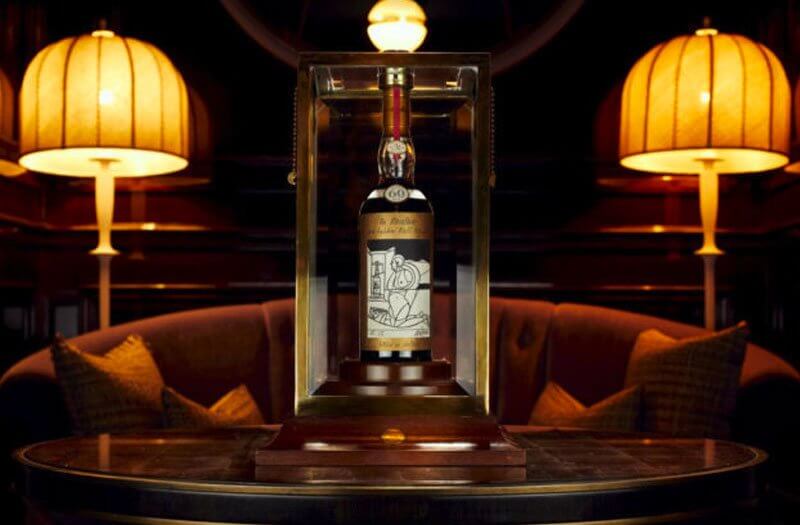 Macallan is going to feature large on this list, and we’ll start with the Valerio Adami 1926 Macallan. The name comes from the fact that the label was created by Italian painter Valerio Adami, and was one of only 12 bearing this label out of only 40 bottles drawn from the cask, thus adding to the uniqueness and rarity of the bottle, a true fusion of art meets whisky.

The sales of fine and rare casks has been a big feature of the whisky market in recent years, and Macallan has been leading the way.

The original owner paid just £5000 for the cask and then forgot about it for 30 years while it accrued value. 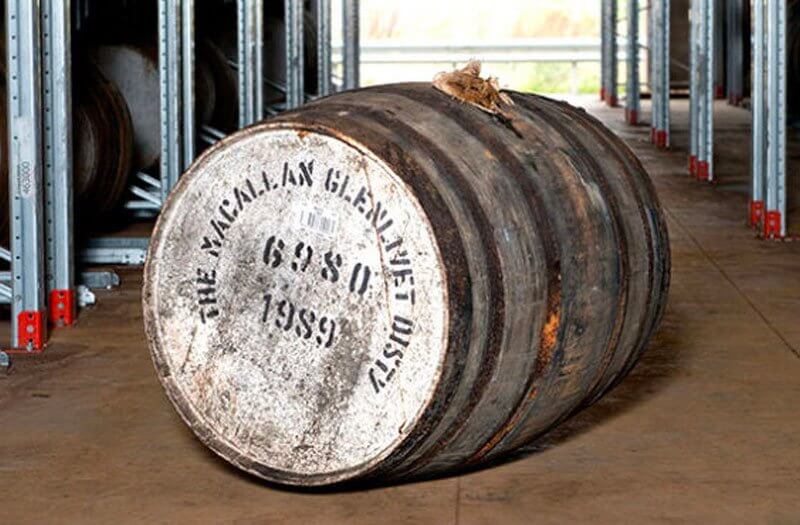 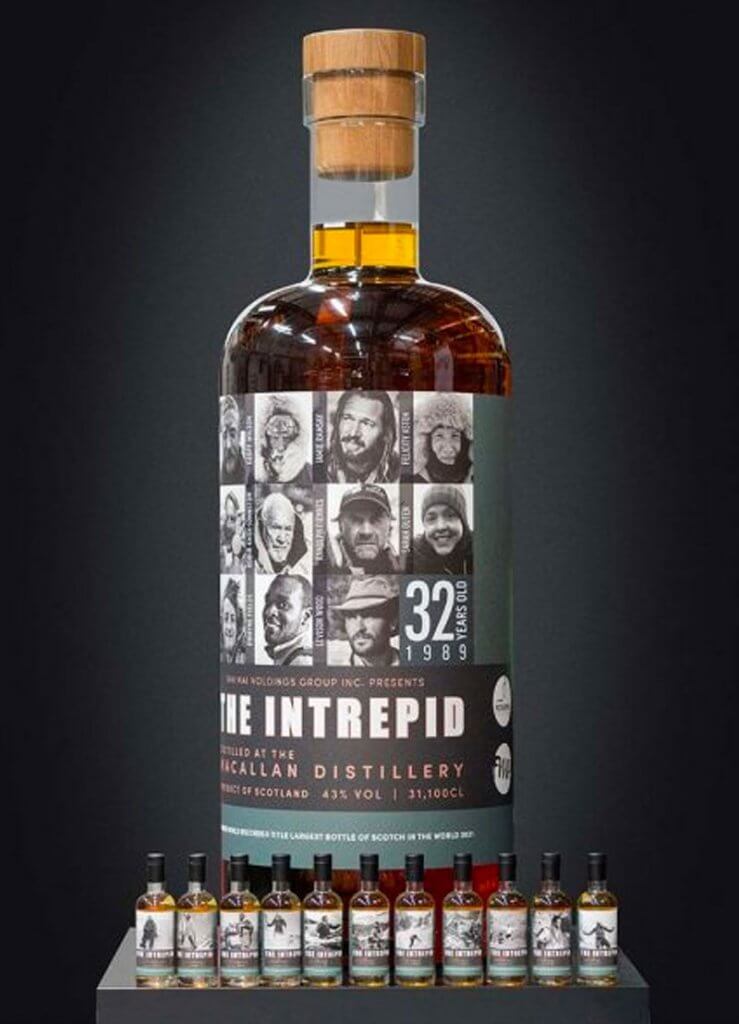 Holding Guinness World Record status as the largest bottle of whisky ever produced, at over 1.8 metres in height, The Intrepid contains 311 litres of 1989 Macallan single malt whisky.

A collaboration between Rosewin Holdings and Fah Mai, The Intrepid was designed to celebrate the achievements of 11 of the world’s most intrepid explorers, including Sir Ranulph Fiennes

Of the 40 bottles of 1926 Macallan, just 1 was adorned with a stunning hand-painted label from Irish artist Michael Dillon, and is one of the world’s most expensive whiskies and one of the rarest bottles on this list. The painted label depicts the Easter Elchies House of The Macallan and the Scottish Highlands. 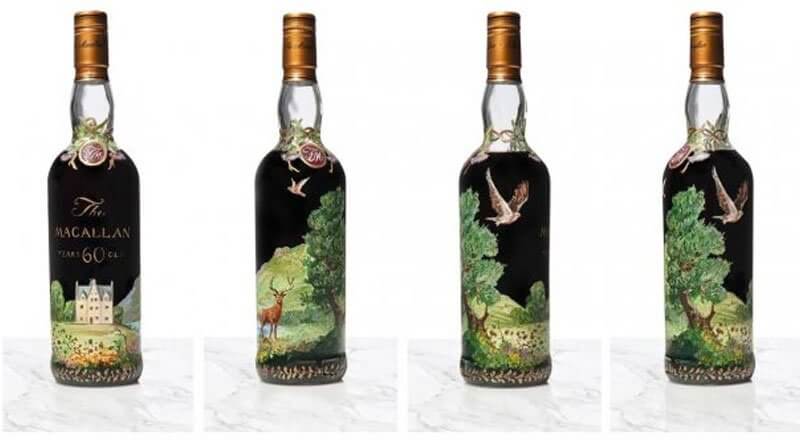 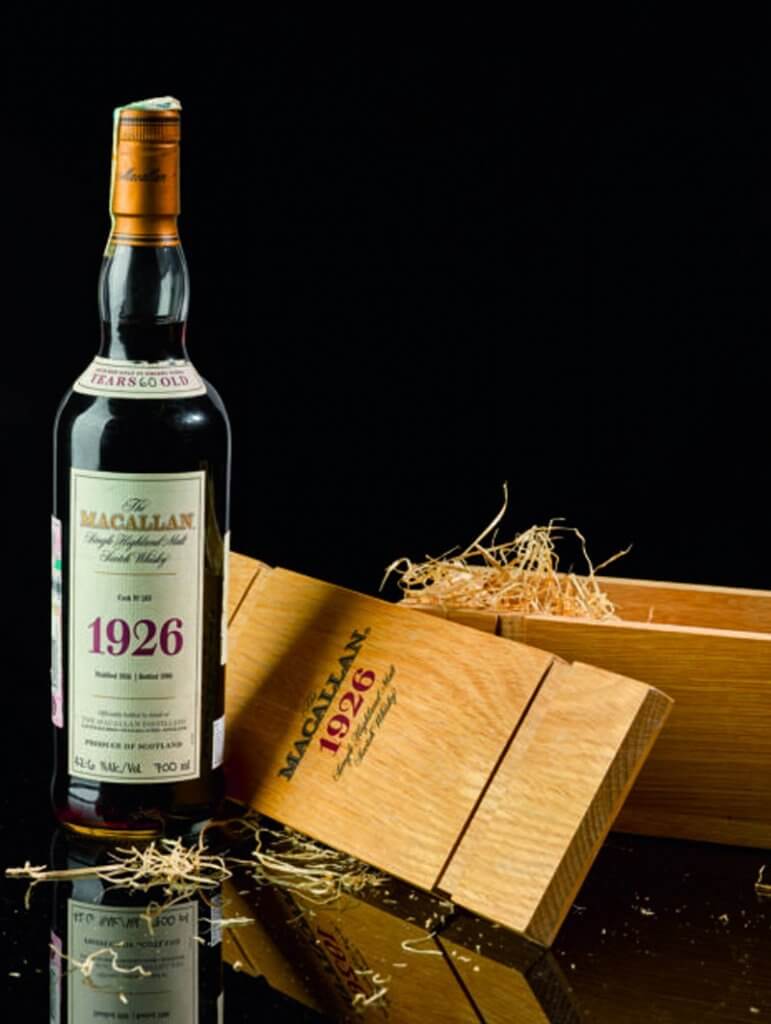 Hot on the heels of the Michael Dillon 1926 Macallan, the Fine and Rare 1926 Macallan smashed its record price before it was even a year old, selling for £1.5million at Sotheby’s in 2019.

One of just 14-bottles ever produced, this whisky was distilled all the way back in 1926 and bottled 60 years later. It is currently the most expensive single bottle ever sold at auction.

The good news is that the sale of all this excess did go to the Correa Family Foundation, a charity supporting children battling cancer. 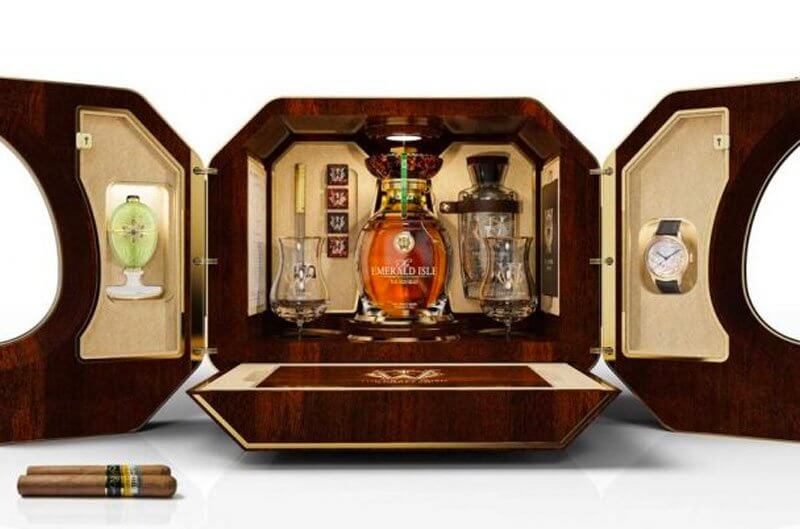 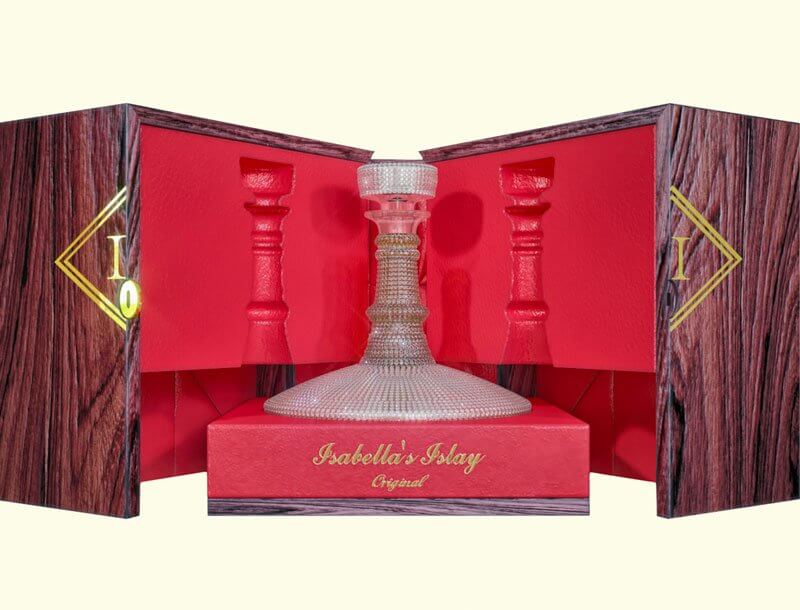 The last and most expensive item on this list is kind of a cheat. We don’t really know a huge amount about the whisky inside this extravagant decanter, other than it reportedly has aromas of hot buttered toast and woodsmoke. What we do know however, is that it’s made of over 5,o00 diamonds, 250 rubies and almost two solid bars of white gold, covering a fine English crystal decanter, so we’re thinking the outside is more the star of the show on this occasion!

We hope you enjoyed this list of the most expensive whiskies in the world. While most of us will never be able to afford a bottle of these rare and valuable spirits, it’s fun to dream. Who knows, maybe one day you’ll be able to add one of these beauties to your collection.