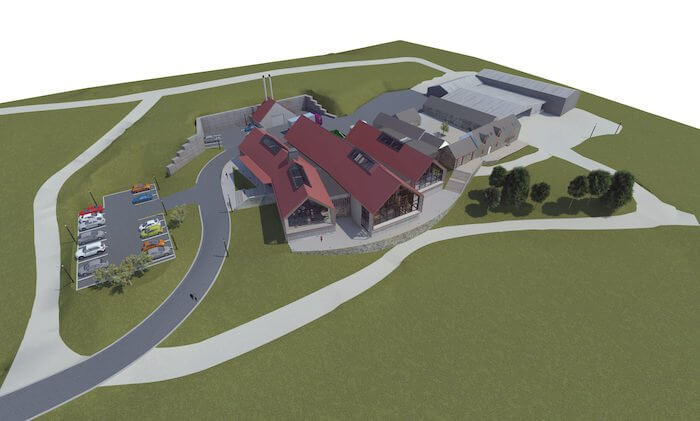 The Campbeltown region of Scotland’s whisky making heritage once was a storied area, playing host at its height with upwards of 30 distilleries. Misfortunate struck this area in droves sadly, and today only three recognized operations – Springbank, Glen Scotia and Glengyle (producing Kilkerran) – still exist. Things may change here in this regard soon, however, with two new whisky producers looking to set up shop.

The first would be known as The Machrihanish Distillery, described by parent company R&B Distillers Limited as being the first farm to bottle distillery in the Campbeltown region in over 180 years. R&B Distillers already owns the Isle of Raasay Distillery, and is looking to compliment this in its portfolio with this second possible operation.

R&B announced recently it had “completed the purchase of the Dhurrie Farm in Machrihanish with the intention of building a new farm to bottle distillery, complete with a visitor centre and ultimately its own whisky club.” They hope to finalize planning this year and break ground in 2023. To this end they are developing a recipe for the Machrihanish single malt that will bring a different style of whisky into their overall line up.

The company hopes to make The Machrihanish Distillery a sustainable net zero distilling operation, meaning it doesn’t use any fossil fuels  in the production of their whisky. In addition to that, they plan to use biological farming practices to ensure that they have what they hope will be a positive impact on the surrounding environment and create greater biodiversity on the farmland

In a more personal tie-in, R&B Distillers’ Co-founder Bill Dobbie’s family were from the Campbeltown area, bringing what the brand feels is extra conviction to The Machrihanish Distillery’s part to play in regenerating a rural community in Scotland.

“When the business was founded in 2015,” said Dobbie in a prepared statement, “we had a clear ambition to create Scotland’s leading artisanal distiller – building on Raasay’s nascent success, and noticing the clear global demand for supreme quality drinks with unquestionable provenance, today’s announcement confirms significant progress towards this goal.”

“Being from the family that owned the Drumore Farm, one of the last farm distilleries in Campbeltown which closed in 1837, I am over the moon to see the return of farm distilling in the Campbeltown region,” added Andrew Smith, local businessman and family friend. “When the R&B team came to me with the idea, we embarked on the pursuit of finding the perfect farm for growing barley and that’s when we found the Dhurrie. The location is perfect and I can’t wait to taste the whisky that is produced by the farm.”

Meanwhile, announced separately is the proposed Dál Riata Distillery from South Star Spirits. With a name derived from an ancient kingdom existing on Scotland’s west coast and north east Ireland, Dál Riata “will have the capacity to produce 850,000 litres of spirit per annum and will utilise locally grown barley from Dunadd Hillfort; this area, near Lochgilphead, was the capital of the Dál Riata kingdom and will be inspiration for creating a spirit and whisky fitting to the style and traditions of the region.

This distillery will overlook Campbeltown Loch, making use of curtain-wall glazing with a viewing balcony inside the Still House to provide views of the Loch and bay. A retail and visitor’s center will also be on site.

“Dál Riata Distillery will be much more than just a single malt whisky production facility; it will be friends and family, it will be business, it will be social and believe us, it will be fun,” said Iain Croucher, Director, in a prepared statement. “A distillery is nothing without its supporters. To be able to connect with people around a table discussing our production methods, wood policy or our maturation strategy, or simply to catch up with old friends, I can only imagine will be the most magical whisky experience.

“The addition of this distillery to the Campbeltown region will reinforce the town’s place in the story of Scotch and Dál Riata will be a new chapter to an already incredible history.”