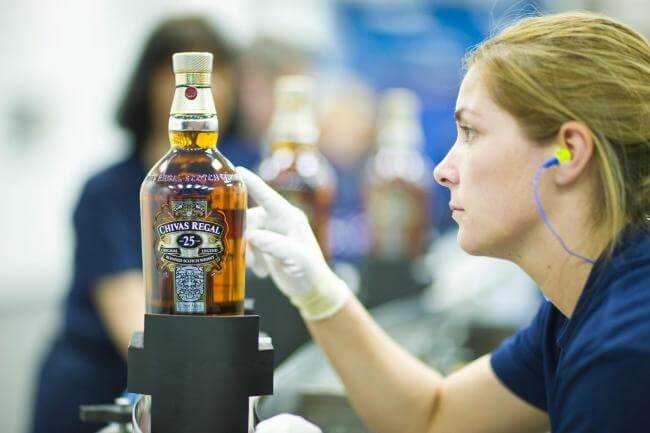 Pernod offered further evidence of the whisky industry’s revival from the pandemic by reporting a profit from recurring operations of nearly €2 billion for the six months to December 31, up 22 per cent on the year before, and ahead of analysts’ expectations.

Both organic sales and profit growth were above pre-pandemic levels, by 13% and 20% respectively, Pernod said.

The company, which owns the Dumbarton-based Chivas Brothers whisky operation, said it had seen strong growth in all regions around the world. That came as the wider industry benefited from the easing of coronavirus restrictions and the reopening of international travel, which is helping to revive sales in the key duty-free market.

And Pernod signalled its confidence that the momentum would carry on into the second half. Alexandre Ricard, chairman and chief executive, declared that, despite the “ongoing volatile environment”, Pernod is expecting to report “strong sales growth across regions” for the full year. He cited “continued on-trade rebound, off-trade resilience and a gradual travelretail recovery”.

The Scotch whisky industry endured a sharp fall in sales in the early months of the pandemic after distillers were ordered to shut down when the first national lockdown was announced in March 2020, and hospitality outlets closed. Sales in travel retail stores were also badly hit as international travel was dramatically curtailed.

However, some distillers began to achieve success by ramping up efforts to sell online and direct to consumers, and increasing their focus on the off-trade. More recently sales have begun to pick up in the on-trade and travel retail as restrictions have been lifted.

Pernod said yesterday that sales for the first half had leapt to nearly €6bn, helped by favourable exchange rates, representing organic growth of 17%. That came amid “dynamic” growth of 14% to €1.6bn in the Americas, notably in the US – its biggest single market – Brazil and in travel retail. Sales expanded in Asia-Rest of World by 16% in to €2.5bn, with “excellent growth driven by China, India and Turkey”, while in Europe sales surged by 21% to €1.8bn following “outstanding growth across the region”. Pernod said it saw sales rebound in Spain, France and travel retail and reported “continued dynamism in Eastern Europe”

The company said its portfolio of “strategic international” brands, which includes Scotch whisky brands Ballantine’s and Chivas Regal, had surged by 19%; all constituent brands, which also include Martell Cognac and Absolut vodka, saw double-digit percentage growth.

Mr Ricard said: “The execution of our Transform & Accelerate strategy is delivering an excellent and broad-based performance in the first half, with brand share gains in most countries and with all our must-win markets showing very strong growth. Despite the ongoing volatile environment, we expect for FY22 strong sales growth across regions, with continued on-trade rebound, off-trade resilience and a gradual travel retail recovery. We will increase investments to fuel growth momentum.”

Drinks industry veteran Stella Morse, chief financial officer of Inverleith and a former senior executive at Scottish & Newcastle, The Edrington Group and C&C Group, has been appointed chairman, while Rennie Donaldson, a former group financial controller of Edrington and head of corporate development at William Grant & Sons, has joined the board as the distiller’s new chief operating officer.