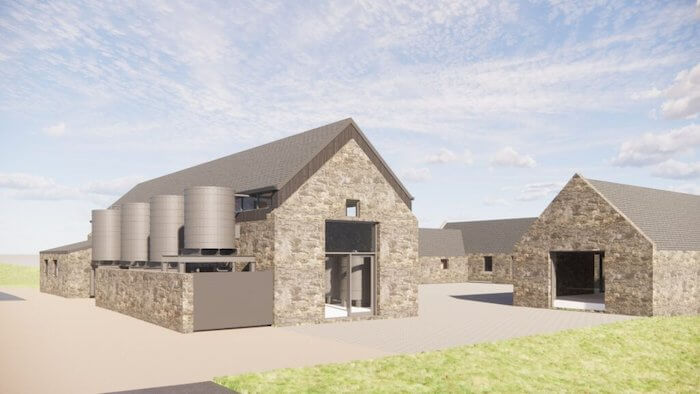 Plans are under way to build The Cabrach Distillery and Heritage Center in one of the UK’s most rural communities, known for its role in the birth of malt whisky.

The multi-million-pound project, it is said by the brand, will showcase the craft of making Scotland’s national drink while telling the story of the historic Cabrach region.

The Cabrach, a remote, upland area in Northeast Scotland, was a once thriving community of more than a thousand residents … and also a land that flourished with illicit distillers and smugglers. The devastation wrought by the Great Wars, however, brought about a spiral of depopulation and decline. Today, less than a hundred folks call the Cabrach home.

A move to regenerate the area as a sustainable community have been driven by The Cabrach Trust, which recently confirmed it secured the £3.5 million needed to activate the project, designed to blend harmoniously with the natural environment of the Cabrach.

Grant Gordon, founder and chairman of The Cabrach Trust, said in a prepared statement, “Our vision is to regenerate the Cabrach as a thriving, sustainable community. Having secured funding for this project represents a critical milestone for the Trust and we look forward to embarking on this exciting next chapter in the Cabrach’s story.”

A 19th-century steading at the Trust’s Inverharroch base will be restored while sustainability will be at the heart of the transformation, and planners look to incorporate a renewable energy source.

The new project represents what’s described as the Trust’s regeneration masterplan for the Cabrach, which will bring about skilled, permanent employment to the area and attract thousands of visitors every year.

The Ethos Foundation, a principal funder of The Cabrach Trust, pledged its support to the project, alongside capital grants from the William Grant Foundation and the Vattenfall Clashindarroch Wind Farm Community Fund.

Forsyths, a leader in distillation equipment and based in nearby Rothes, will also contribute to the project. The Bently Foundation awarded a significant grant to the project in 2021 as well.

With funding secured and planning approval in place, work at the site is expected to get under way in February, with a goal of being operational by spring of 2023.

Jonathan Christie, chief executive of The Cabrach Trust, said that with the build starting early in the new year, “We look forward to sharing progress as our one-of-a-kind social enterprise unfolds, while launching several other exciting projects all poised to go live in 2022.”

Richard Lochhead, member of Scottish Parliament, said, “The Cabrach is a unique community with an incredibly rich heritage. The Trust’s ambitious regeneration plans promise to open a new chapter in its story. It is widely believed that the Cabrach is the birthplace of Scotch whisky and plans for a new distillery and heritage center are not only fitting but also hugely exciting. This project will undoubtedly put the Cabrach on the map and I’m delighted this funding has been secured.”

In 2013, The Cabrach Trust acquired the historic Inverharroch Farm and its 170 acres of land and through community asset transfer, acquired the Old School and Hall along with the Acorn Community Center.

Following the restoration, The Cabrach Distillery and Heritage Center will be housed within the Inverharroch Farm steadings. The distillery and traditional dunnage warehouse will occupy two wings of the steading, with the additional two wings allocated for the heritage center, community bistro, tasting room, and visitor reception.

Operated as a social enterprise, the distillery will utilize what described as historic whisky-making methods which reflect the manufacture and production of malt whisky from the 1800s, when “real Cabrach whisky” was widely acclaimed. Following aging and maturation, the bottled product will eventually be available for sale, generating profits as part of the Trust’s long-term sustainability plan.