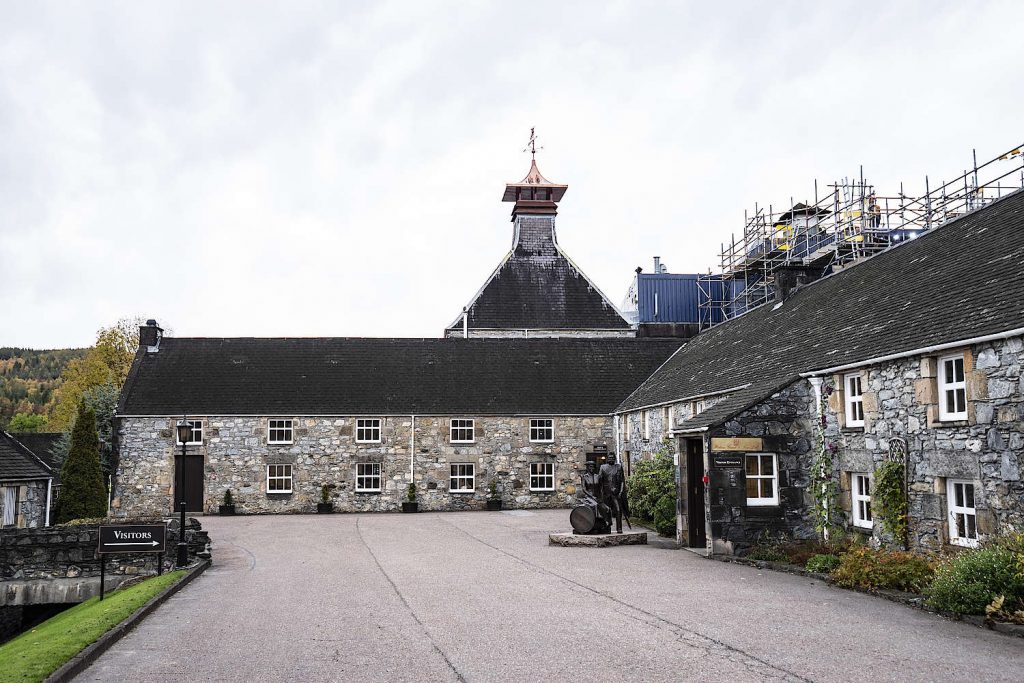 Scotch whisky maker Glenfiddich has announced that it will convert its delivery trucks to run on low-emission biogas made from waste products from its own whisky distilling process.

The company said it has installed fuelling stations at its Dufftown distillery in north-eastern Scotland which use technology developed by its parent company William Grant and Sons. It will convert its production waste and residues into an Ultra-Low Carbon Fuel (ULCF) gas that produces minimal carbon dioxide and other harmful emissions.

Glenfiddich said the transition to using fuel made from the distillery’s waste product is part of a “closed-loop” sustainability initiative. Stuart Watts, distillery director at William Grant, said traditionally Glenfiddich has sold off spent grains left over from the malting process to be used for a high-protein cattle feed.

However, through anaerobic digestion – where bacteria break down organic matter, producing biogas – the distillery can also use the liquid waste from the process to make fuel and eventually recycle all of its waste products this way.

“The thought process behind this was ‘What can we do that’s better for us all?’,” Watts said. 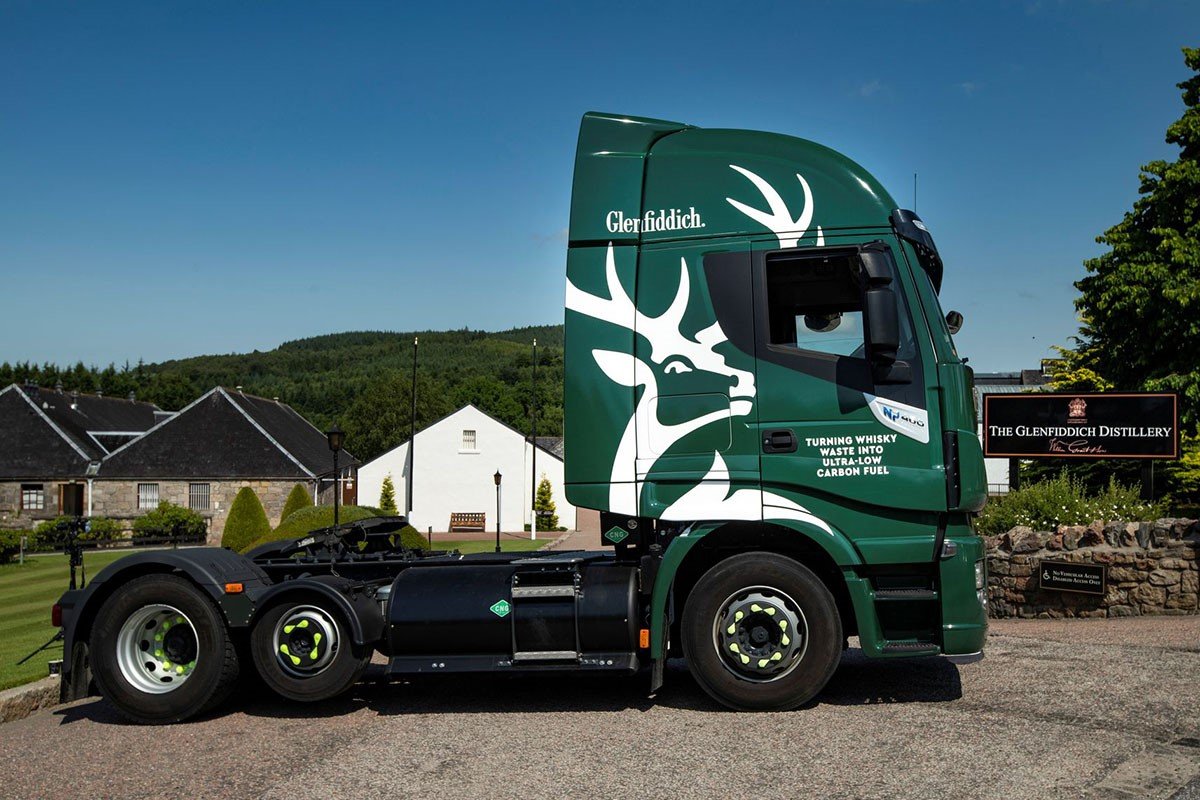 The distiller, which sells over 14 million bottles of single-malt whisky a year, said its whisky waste-based biogas is already powering three specially converted trucks that transport Glenfiddich spirit from production at Dufftown through to bottling and packaging, covering four William Grant sites in central and western Scotland.

Sixteenth-century English chronicler Raphael Holinshed wrote that, when consumed moderately, whisky’s many medicinal benefits include preventing the “head from whirling, the tongue from lisping… the hands from shivering, the bones from aching.”

Experts now add that its waste products could also benefit the environment. The biogas emitted by whisky’s production process cuts CO2 emissions by over 95 per cent compared to diesel and other fossil fuels and reduces other harmful particulates and greenhouse gas emissions by up to 99 per cent, Glenfiddich said.

The trucks Glenfiddich is using are converted vehicles from truck maker Iveco that normally run on liquefied natural gas. Each biogas truck will displace up to 250 tonnes of CO2 annually, according to the distiller.

Glenfiddich has a fleet of around 20 trucks and Watts believes the technology could be applied throughout the delivery fleets of William Grant and Sons’ whisky brands. It could also be scaled up to fuel other company’s trucks. 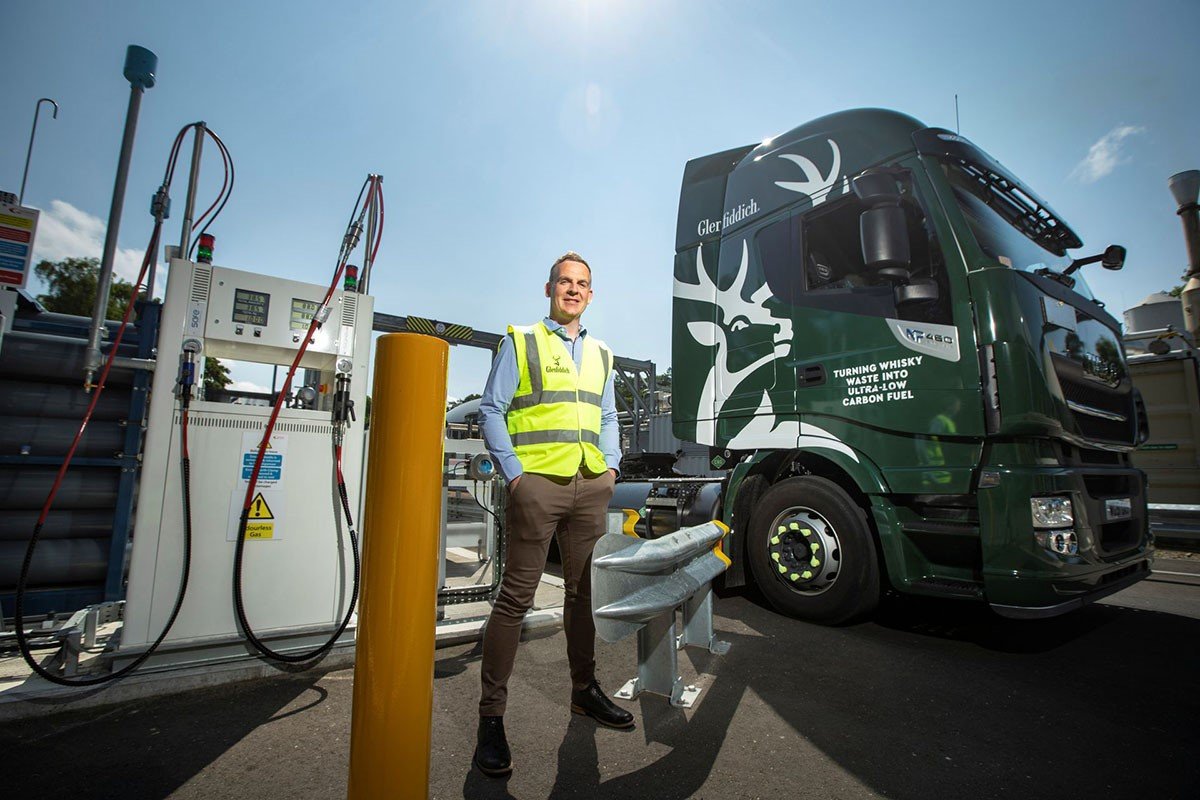 Earlier this year, Nova Innovation installed a series of underwater turbines off the west coast of Scotland, with its turbines generating renewable energy to power local Scotch whisky distilleries.

Last year, the Government announced a £10m fund to assist UK distilleries with transitions to low-carbon fuels, such as hydrogen and biomass.

Glenfiddich is not the only one using its waste products to fuel its vehicles. In 2012, independent whisky maker Tullibardine became the world’s first distillery to supply ingredients to make biofuel for vehicles from its waste products.

Read the original article on Engineering and Technology