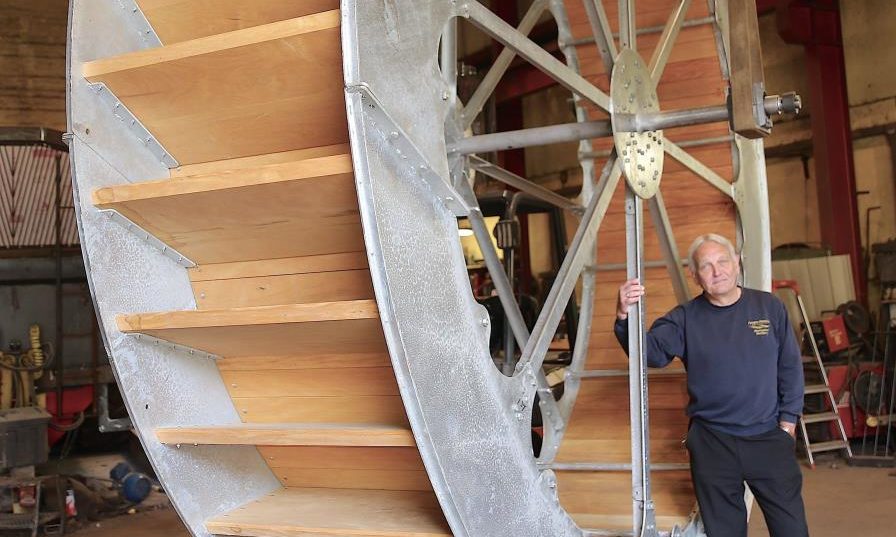 A stunning new water wheel is turning in the heart of an Angus distillery almost two centuries on from the installation of its original.

Years in the planning, the project at Glencadam in Brechin makes it Scotland’s only whisky distillery to now have a working internal water wheel.

It is to become the centrepiece of a new visitor centre being developed there.

When Glencadam was established in 1825, it was built with a water wheel in the centre of the distillery.

The wheel was powered by Barrie’s Burn, which ran in a lade through the building.

It was integral to the distillery’s operations, powering the malt intake, the mill and the mash tun.

However, the introduction of electricity at the distillery in the early 1900s made it redundant, and having fallen into poor repair, it had to be removed.

Glencadam was bought by Angus Dundee Distillers in 2003 and their long-held ambition to restore the unique piece of history has now been realised.

Distilleries director Robert Fleming said: “When the distillery was established in 1825 there was no electricity, so the only power sources available to make whisky were fire and water.

“The water wheel was positioned right in the centre of the distillery, so that it could drive pullies, belts and cogs throughout the building.”

The new water wheel has been placed in the original location and is powered by the same water lade.

Local engineers and blacksmiths, Ewan G Milne of Brechin were commissioned to design and build the new water wheel.

It was modelled on the 1825 original.

The challenge was to develop a wheel which could be fitted into the compact space inside the distillery, and also generate power.

The beautifully balanced water wheel weighs in at 1.9 tonnes.

It is 14 feet in diameter, with 32 wooden buckets.

The design maximises the water-holding capacity, to create the power that can be fed into the distillery’s energy system.

Ewan Milne said: “I’m born and bred in Brechin so it’s a total honour to build the water wheel.

“Putting it into the distillery is absolutely terrific.”

Earlier this year, the distillery owners announced plans to create a world-class visitor centre as part of significant investment at Glencadam.

A specially designed glass floor is being constructed to allow visitors a view of the wheel from above as well as from the side, giving a unique glimpse into the distillery’s past.

Glencadam Distillery manager Douglas Fitchett said: “We are incredibly excited about this project to re-instate the water wheel.

“It’s taken a lot of planning and hard work to get here, but it’s all been worth it.

“The wheel is such an important piece of the history of Glencadam, and it makes me enormously proud the see it back where it used to be, right in the heart of the distillery”.