From Grain to Glass: How Scotch Whisky Distillers Are Creating a Sustainable Future

From Grain to Glass: How Scotch Whisky Distillers Are Creating a Sustainable Future 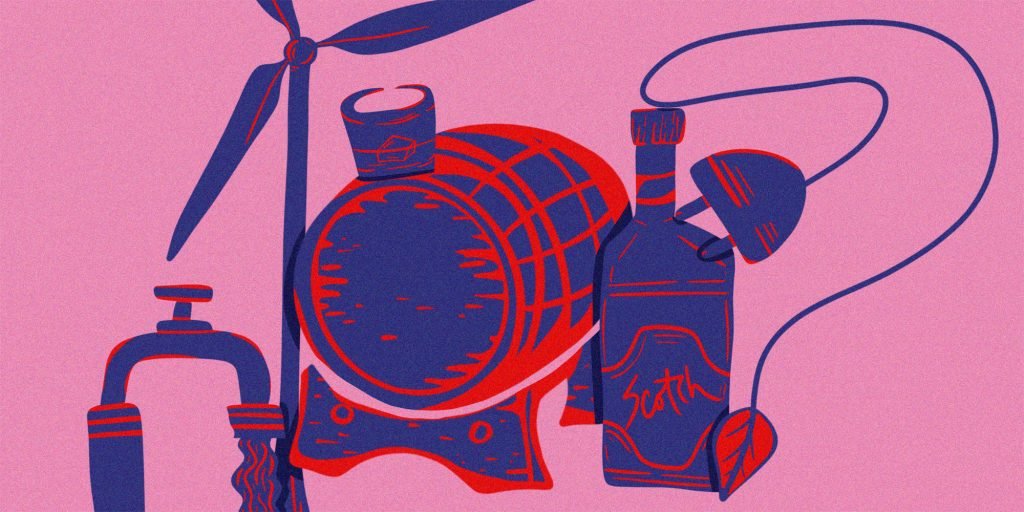 Over the last 10 years, the topic of sustainability has gathered the kind of steam normally found inside a copper pot still. But recent geopolitical events have distracted from the issue. Even before the global pandemic, the Scotch whisky industry faced a two-pronged battle against the continued uncertainty of Brexit, and an ongoing trade war between the European Union (EU) and the U.S.

In a nutshell: Less than half a year before the U.K.’s transition period to leave the EU expires, Scotch whisky producers remain in the dark over the customs and excise procedures that will be required to export goods to the continent, which is its largest export market, according to the Scotch Whisky Association (SWA). Plus, there’s the issue of 25 percent tariffs that were imposed on Scotch whisky by the U.S. government in October 2019. Since then, the SWA estimates exports have fallen by 30 percent, amounting to £200 million (around $260 million) in lost sales.

Despite those immediate concerns and the challenges related to the coronavirus pandemic, it is sustainability — and the industry’s ability to improve its practices — that promises to shape the future of the Scotch whisky industry over the long haul.

According to SWA data, the Scotch whisky industry relied on fossil fuels for more than 70 percent of its energy in 2018. But the clock is ticking for this reliance to end. The Scottish government plans to have “decarbonized” the country’s energy system “almost completely” by 2050. This is in line with the U.K’s legally-binding target of reaching net zero carbon emissions by this time. (“Net zero” describes the process of offsetting greenhouse gas emissions by removing an equal amount of carbon dioxide from the atmosphere.)

For distillers, adhering to this goal largely depends on finding alternative energy sources to fire the giant stills used for distillation — the most significant use of fossil fuels by some measure. The path to sustainability has also forced producers to reconsider every step of their whisky’s journey, from grain to glass and even beyond.

The SWA, the industry’s leading trade organization whose members account for over 90 percent of production, has set the goal of achieving net zero carbon emissions by 2045. It first outlined this aim in 2009, when it launched the Scotch Whisky Industry Environmental Strategy. An ambitious manifesto, the strategy aims to improve the sustainable practices of its members by reducing waste, improving packaging, increasing water efficiency, and easing its reliance on harmful fossil fuels.

In May 2020, the SWA published its most recent report on the progress being made in the industry, based on data from 2018. Many of its major targets have been met ahead of schedule, most notably the reliance on fossil fuels. Non-fossil fuels accounted for less than 5 percent of the energy use in the industry at the time of the strategy launch. By 2018, this figure had increased to 28 percent, contributing to a 34 percent reduction in greenhouse gasses. Water efficiency, too, improved by 22 percent, more than double the 2020 target.

Other areas within the industry require more work, specifically packaging. A 10 percent reduction in the average weight of packaging was set for 2020, but since 2012, packaging weight has actually increased slightly — the product of “continued consumer demand for premium products,” according to the SWA.

“The report demonstrates that companies in the industry are ready to play their part in minimizing our collective carbon footprint, and that fundamental changes are needed both throughout the Scotch Whisky production process and government policies to help Scotland meet the 2045 net zero target,” Dagmar Droogsma, SWA’s director of industry, said in a June press release covering the latest progress report. (Multiple interview requests from VinePair remain unanswered by the SWA at the time of publishing.)

On the topic of political policies, the U.K. government last week announced a new £10 million ($13 million) fund, which will be available to Scottish and Northern Irish distilleries to help them “go green” and cut emissions. The fund aims to cut CO2 emissions by almost half a million tons per year — the equivalent of taking 100,000 cars off the road.

While the multimillion dollar fund shows a positive signal intent from the U.K. government, the total pales in comparison to the combined hundreds of millions already spent by the leading whisky brands in the search for fossil fuel alternatives. Much of this sum has gone toward harnessing the power from previously considered “waste products.”

Until 10 years ago, creating animal feed was the most sustainable use for the byproducts of whisky distillation. Now, multiple distilleries are using these materials to produce energy to fire their stills. The first method sees dried draff — the used grain left over from distillation — burned in biomass boilers (sometimes with wood chips). The second, more complicated technique harnesses both draff and pot ale, the syrupy liquid left in stills after distillation. When the two are mixed, a process called anaerobic digestion produces methane-rich combustible biogas. The leftover “digestate” can then be separated into solid and liquid fractions, both of which can be processed into biofertilizers.

Since 2010, many of the companies that own the leading whisky brands have invested heavily in developing anaerobic digestion plants, including Diageo, Chivas Brothers (owned by Pernod Ricard), William Grant & Sons, Bacardi, The Edrington Group, Ian Macleod Distillers, Inver House Distillers, and more.

And it’s not just anaerobic digesters the brands are betting on. While Diageo has invested in multiple anaerobic digestion initiatives, the largest Scotch whisky producer has set its own ambitious targets for reducing emissions and waste, and improving packaging. For the latter, the company announced a 100 percent plastic-free paper-based bottle, which will debut in 2021 via its Johnnie Walker brand. In its recently published annual report, Diageo also stated that 100 percent of the electricity used at its U.K. sites in the last fiscal year came from renewable sources.

In 2011, Ian Macleod Distillers introduced a wetlands facility at its Glengoyne distillery. The series of 12 pools each contains thick reed beds, which are capable of filtering 100 percent of the distillery’s waste liquid before its reintroduction to nearby water sources. (The company also has an anaerobic digester on site.) At Chivas Brothers’ Dalmunach Distillery, which opened in 2016, all electricity comes from renewable hydro and wind sources. The distillery also contains state-of-the-art systems to increase efficiency by recovering heat from its stills and condensers. In February 2020, Chivas Brothers announced plans to create the first “carbon neutral whisky distillery” within two years, as part of its ongoing sustainability strategy.

HOW SMALLER-SCALE BRANDS ARE GOING GREEN

While the innovations required to improve sustainably require significant financial investment, that hasn’t dismayed smaller companies from getting involved. In fact, in recent years, multiple distilleries have launched with this exact philosophy in mind.

When planning the Nc’nean distillery, which opened in 2017, founder Annabel Thomas identified multiple areas of production that she wanted to ensure were as sustainable as possible. The first involved using 100 percent organic barley, something she says was surprisingly difficult to source and costs significantly more than commercial cereals. But the benefit to the biodiversity on the farms where it’s grown makes it worth it, Thomas says. Like many other distilleries, Nc’nean generates energy for its stills using a biomass boiler, which runs on wood chips sourced from a nearby timber forest. It also recycles the byproducts of distillation as animal feed and fertilizer.

Then there were other aspects of production that Thomas hadn’t considered prior to opening, but has since found sustainable solutions for. These include an enzyme-based cleaner, which reduces the distillery’s chemical reliance by 50 percent. And when Nc’nean debuts its first whisky in September, the liquid will be bottled in 100 percent recycled glass bottles — a first for any Scotch whisky producer, according to Thomas.

Besides being “the right thing to do,” Thomas says producing whisky sustainably, and making that ethos a key part of the brand’s messaging, is important for both consumers and the industry.

“It spreads the word and also puts more pressure on everybody else in the industry to come along on that journey,” she says. Ncn’ean, notably, is not a member of the SWA and Thomas says the target of 2045 for net zero is “too little too late.”

John Stirling, director of Arbikie Distilling, says, “Why be neutral when you can be positive?” Arbikie grows all the ingredients for its spirits, including the peas used for two carbon-positive spirits, Nàdar Gin and Vodka.

Peas remove nitrogen from the atmosphere while growing, which means they don’t require synthetic fertilizers to grow and also improve soil quality after harvest, Stirling explains. The nitrogen-rich soil is then used to grow heritage barley grains for the distillery’s malt whisky. While Stirling won’t reveal the varieties used, he says their yields are lower than those used by large-scale distillers, but their shorter growing cycle negates the need to use synthetic fertilizers, a common practice in Scottish barley production.

“In the whisky world, the aim has always been to maximize yield of barley and spirit, without recognizing the damage that does to the environment,” Sitrling says.

Perhaps the larger brands are aware of this but would rather keep the focus on positive achievements. The steps that have been taken to improve the sustainability of the industry as a whole are praiseworthy indeed. But the attention being paid to the provenance of base ingredients lags some way behind the improvements in production processes.

In the reporting for this article, VinePair reached out to many of the largest Scotch whisky producers with questions surrounding their sustainable practices. All were either unwilling or unable to provide a response in the given time frame.

This could be a simple question of logistics. It could also be silent recognition that further strides need to be taken before the Scotch whisky industry truly turns green.

Read the original article on VinePair