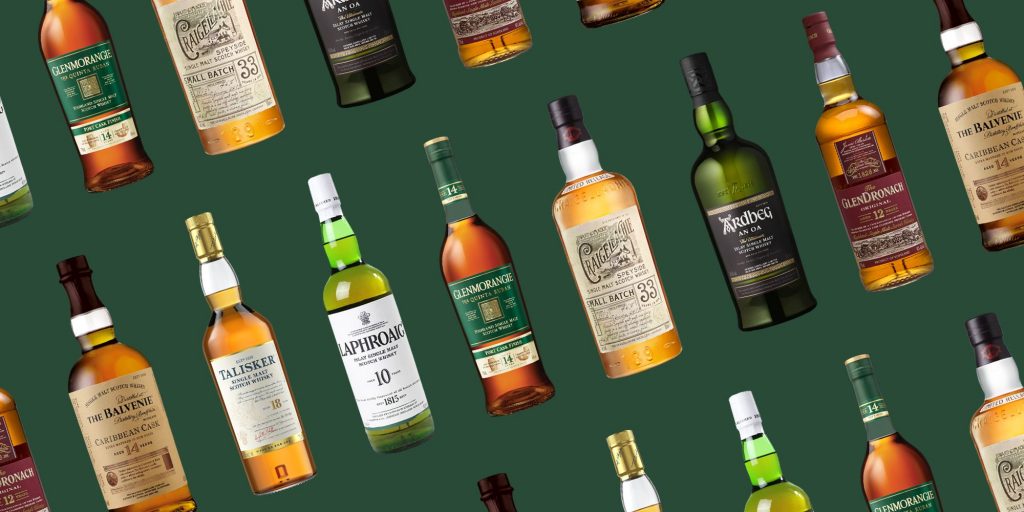 Photo Credit: Esquire
Christopher Osburn has spent the past fifteen years in search of “the best” — or at least his very favorite — sips of whisk(e)y on earth. In the process, he’s enjoyed more whisk(e)y drams than his doctor would dare feel comfortable with, traveled to over 20 countries testing local spirits, and visited more than fifty distilleries.

I’ve written about it in the past, but I’d be remiss if we didn’t mention it again here: for many drinkers, scotch — especially single malt scotch — seems too fancy. Inaccessible. Distilled just for the rich and those in need of an expensive hobby. Drink snobs.

But if you still hold those perceptions, you’re mostly wrong. While there are high-quality, well-aged offerings that you (and even I) will likely never taste, the contemporary scotch world is completely inclusive and full of reasonably priced, gateway bottles perfect for novices. There are even plenty of single malts that you can likely afford (and are worth a small splurge).

To fight single malt scotch stigmas, I decided to make a list (including tasting notes) of my personal favorite bottles for beginners. I even included two smoky offerings from Islay, in case you’re ready to get your peat on.

There’s a reason whisky expert Jim Murray gave this bottle a score of 95 in his Whisky Bible. It’s an amazing value whisky. This award-winning Highland whisky is part of Diageo’s Classic Malts range. It’s renowned for its smooth, mellow, easy to drink aspects.

Even if you’ve never purchased Scotch before, this bottle belongs on your shelf. It’s a perfect introduction to single malt whisky.

Like with any whisky, you should start with the nose. Right away, you’re met with dried orange peel, crisp apple, and caramel sweetness. The first sip, while velvety, yields hints of toasted vanilla, subtle oak, and a hint of smoke. The finish is long and filled with nutty flavors along with butterscotch, toffee, and just a wisp of peppery spice.

If you’re willing to pay around $70 dollars, you’ll have a bottle that will not only be a gateway into single malts, but also a bottle you’ll return to time and again.

First introduced in 1993, The Balvenie Double Wood 12 gets its name because it’s literally aged in two different woods. First, it’s matured for a minimum of 12 years in ex-bourbon casks before being aged another nine months in ex-Oloroso sherry butts. It then spends another four months in an oak tun to help the flavors to meld together.

The result of all of that hard work is noticeable from the first nose. The very first aroma detected is the sweet sherry scent. This is followed by more well-known Scotch flavors like vanilla, butterscotch, and pepper. The sip brings forth more sherry, cinnamon, dried fruits, and caramel. The finish is long, warming, dry, and subtly spicy.

If you’re looking for a whisky that is both delicate and full of flavor, you’ll want to spend a long time sipping a glass of this truly memorable juice.

When it comes beginner bottles that you’ll keep purchasing, it’s really tough to beat Glenmorangie The Original 10 Year. The distillery’s flagship bottle, “The Original” is a ten-year-old single malt made in the tallest stills in Scotland. The distillate is then matured in ex-bourbon barrels to create a complex, well-balanced spirit worthy of any whisky collection from beginner to expert.

Right away, you’re met with aromas of honey, vanilla, sticky toffee pudding, and just a hint of citrus zest. The first sip is exceptionally mellow with hints of cinnamon, dried fruits, caramel, and toasted oak. The finish is long, pleasing, and filled with honeysuckle, caramel, and just a tiny hint of dried orange peel at the end.

The price is right for this offering. So right that you shouldn’t feel bad mixing it into a cocktail if you don’t want to sip it straight.

You might have a hard time spelling Auchentoshan and that’s okay. All you need to do is drink it. The best gateway offering from this Lowlands distillery (fairly close to Glasgow) is this triple distilled single malt aged (with no age statement) in American oak barrels that formerly held bourbon.

First introduced in 2014, this expression has become go-to for whisky novices hoping to find a way into the Scotch world.

Before taking a sip, this whisky deserves a long nosing. You’ll be met with hints of orange zest, spicy cinnamon, toasted wood, and subtle spices. The sip delivers flavors of vanilla, maple covered pancakes, rich caramel, and dried orange peel. The finish is mellow, long-lasting, and full of more vanilla sweetness and just a tiny bit of peppery spice.

Another bargain bottle, this is the kind of offering we try to keep to ourselves for fear that the price will rise and we won’t be able to afford it anymore.

When it comes to Islay malts, you’ve probably heard a lot about the likes of Lagavulin, Bruichladdich, and Laphroaig. But it’s actually Caol Ila that produces the most of any of the iconic distilleries. From Gaelic, the name roughly translates to “sound of Islay” and if you want to get into Islay whiskies, look no further than its 12-year-old.

Launched in 2002, this bottle is light, mellow, and has right the right amount of smoke for a peat novice.

You’ll notice how complex this whisky is from the first nose. Aromas of tobacco, Christmas spices, peat smoke, and sweet caramel are right up front. A sip brings more smoke, sugary vanilla, and dried orange peel to the table. The finish is long, pleasantly warm, smoky, and touched by light peppery spice.

When it comes to gateway peat-smoked whiskies, it’s hard to beat the complexities of this single malt. Perfect in a penicillin cocktail, but even better in a Glencairn class with a few drops of water to open it up.

Another name you’ll have trouble spelling, Ardbeg Uigeadail is another great gateway into the world of smoky whiskies. In 2009, Jim Murray’s Whisky Bible named this expression the “World Whisky of the Year’ and for good reason. Named for the loch Ardbeg uses as its water source, this introduction to peat-smoking is matured in a combination of ex-bourbon casks and sherry butts.

Like most Islay whiskies, your nose is met with a hit of smoke right off the bat. But that leads to brown sugar, leather, and dried fruits. From the first sip, you’ll be met with rich honey, dark, toasted caramel sweetness, and cinnamon — all covered with a blanket of rich smoke. The finish is long, warming, and a mix of toffee, caramel, and cigar smoke.

This well-balanced whisky is full of smoke, but it’s more than just a smoke bomb. It’s complex and full of other flavors that you’ll become acquainted with if you take the time to sip it slowly with just a splash of water.