The Macallan Reveals Third Art Collaboration with Sir Peter Blake: The Anecdotes of Ages Collection Inspired by the Legacy of The Macallan Estate

The Macallan Reveals Third Art Collaboration with Sir Peter Blake: The Anecdotes of Ages Collection Inspired by the Legacy of The Macallan Estate 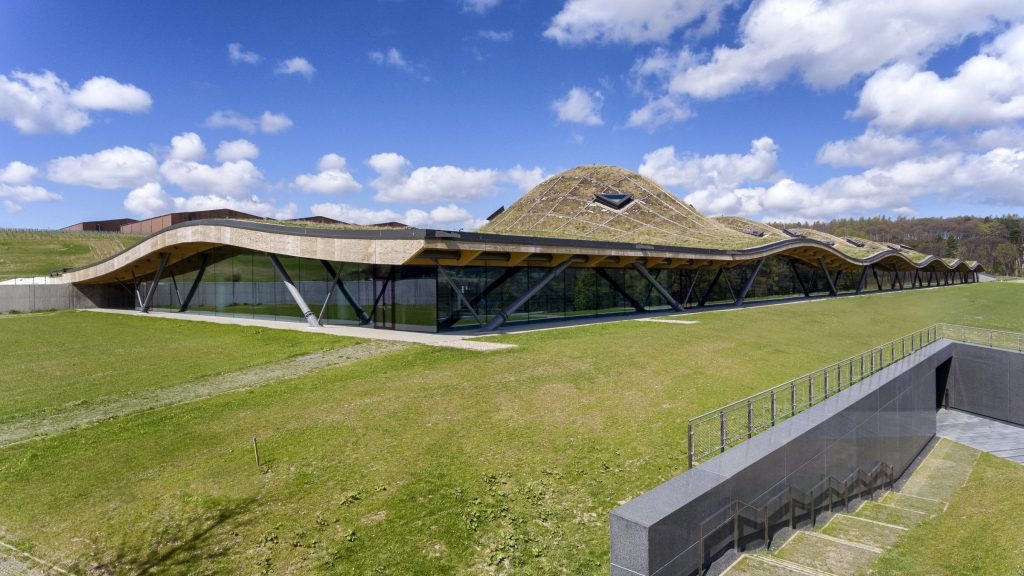 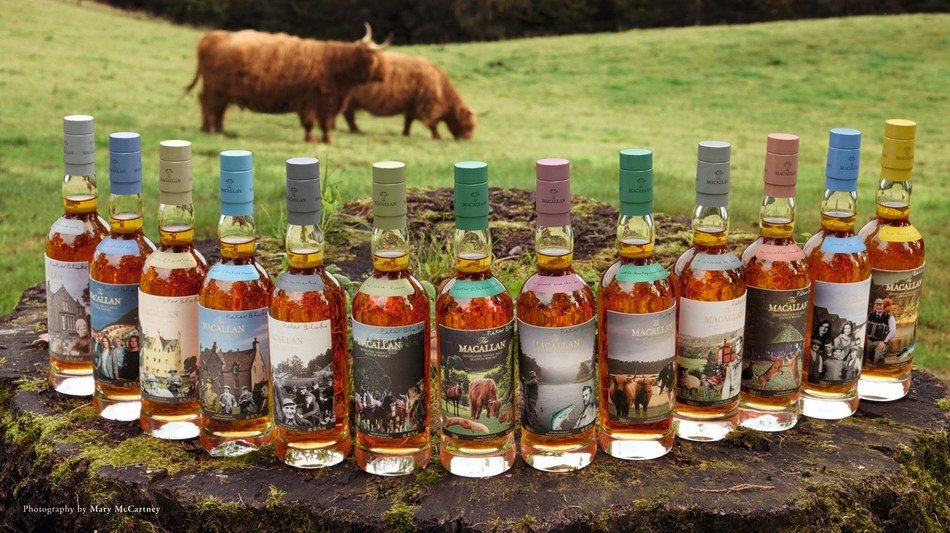 At the heart of the esteemed collection are 13 one-of-a-kind bottles of exceptional 1967 whisky, chosen for its classic yet distinctly colorful character representative of the year that Sir Peter Blake’s collage style transcended the art world into pop culture. Each individual bottle features its own original Sir Peter Blake collage art on the label, detailing unique stories relating to The Macallan’s history, community, and the beautiful natural landscape of The Macallan Estate. One of the original bottles will be auctioned by Sotheby’s in support of the Solomon R. Guggenheim Museum’s diversity, equity, access, and inclusion initiatives.

Collaborating with Sir Peter Blake for more than three decades, this esteemed collection is a natural partnership: The Macallan holds a deep appreciation for the time it takes to establish, nurture, and protect heritage as well as a desire to produce iconic creations and legendary pieces, and these values of timelessness are mirrored in both the character and work of Sir Peter Blake.

Over the decades, Sir Peter Blake’s unique and timeless signature style has transcended fashion, music, and art movements. For this collection, each bottle of whisky was carefully selected and the art labels that Sir Peter Blake created are of the finest caliber, designed to resonate with The Macallan collectors and the world of art. Sir Peter Blake deftly applies his particular mix of styles, from colorful lettering to likeness drawing, to various projects—most recently, the building wrap for Hyde Parks Mandarin Oriental Hotel, his largest yet, and his current project ‘Joseph Cornell’s Holiday,’ a series of crowd collages that continue the life of a fellow collagist.

“I am deeply inspired by the incredible legacy of The Macallan, and its emphasis on family, tradition, and the natural world,” said Sir Peter Blake. “Each collage in The Anecdotes of Ages Collection is inspired by The Macallan’s history and heritage, one that respects time and craft, two essential components of my own creative process. I meticulously worked on each collage, pulling from The Macallan Estate’s rich history to complete a collection that is a celebration of art and whisky.”

Each of the 13 original Anecdotes of Ages bottles are hand-blown with an oak stopper, and feature a label signed by Sir Peter Blake. Presented in a handcrafted European oak case incorporating thumbnail photography revealing Sir Peter Blake’s inspirational journey with The Macallan, the expressions are also accompanied by a leather-bound book showcasing all 13 label artworks and corresponding stories, as well as a certificate of authenticity. While the 13th original bottle will be retained in The Macallan archive, a highly limited edition whisky featuring a duplicate label and the same rare 1967 whisky, will be released as The Anecdotes of Ages Collection: Down to Work Limited Edition. Only 322 bottles will be available worldwide for an SRP of $83,000.

“This exceptional 1967 whisky was chosen for its classic yet distinctively colorful character, which is reminiscent of Sir Peter Blake’s work of the same year,” said Sarah Burgess, The Macallan Lead Whisky Maker. “With notes of oak and fig leading to a burst of hazelnut and strawberry, this is a truly special single malt that finishes with complex flavors of chocolate and lightly spiced peach. It is in many ways, its own work of art.”

The Macallan Anecdotes of Ages Virtual Art Exhibit, is a virtual exploration where art and whisky enthusiasts from around the world have an opportunity to digitally explore The Anecdotes of Ages Collection. Consisting of three galleries, this 360 virtual environment is part of a global trend that sees the expansion of digital art experiences.

Digital attendees of The Macallan Anecdotes of Ages Virtual Art Exhibit will begin their journey in the Sir Peter Blake studio where they will learn about his famous pioneering pop art and collage style. Next, they will explore the Anecdotes of Ages gallery, showcasing the inspiration behind each of the artworks that Blake created to tell the story of 13 bottles of The Macallan—from The Macallan’s spiritual home at Easter Elchies Estate to the new Distillery and Visitor Experience—before the world reveal of the bottles with Sir Peter Blake’s handcrafted and original label artwork.

In March 2021, Sotheby’s will host a live auction where one of the 13 original bottles of The Macallan Anecdotes of Ages Collection will be sold to raise funds to benefit the Solomon R. Guggenheim Museum. Support from The Macallan will advance efforts underway at the Guggenheim to increase free access and develop engagement with a variety of audiences, in alignment with the museum’s diversity, equity, access, and inclusion initiatives.

Jamie Ritchie, Worldwide Head of Sotheby’s Wine remarked “We are delighted to continue our long association of partnering with The Macallan to present very special releases that raise funds for charitable organizations around the world. The Anecdotes of Ages Collection provides the perfect intersection where Sir Peter Blake’s distinct collage art meets the art of creating great whisky, with proceeds supporting diverse audience engagement and free access at the Guggenheim Museum. This unique auction, of one of the 13 bottles with original collage art, will appeal to whisky enthusiasts, art lovers, and philanthropists alike.”

Anecdotes of Ages Collection: Down to Work Limited EditionColor: Caramelized peachAroma: Classic antique oak, dried fruit and fig combined with hints of pineapple and mango layered with a decadent chocolate strawberry note.Palate: Warm chocolate with light nutmeg and ginger, oak spices and sweet oak opening into pineapple and coconut with an unexpected strawberry and hazelnut burstFinish: Complex with a medium to long finish of chocolate, sweet oak and lightly spiced peachABV: 46.7%

An Estate, A Community and A DistilleryColor: CinnamonAroma: Rich in dried fruits and spices with a hint of orange and clovePalate: Dried fruits with cracked black pepper and treacle, accents of vanilla and orange oilFinish: A long, rich oak finish with cinnamon and cacaoABV: 47.7%

About The MacallanFounded in 1824, The Macallan is renowned worldwide for its extraordinary single malt whiskies. Their outstanding quality and distinctive character reveal the uncompromised excellence pursued by The Macallan since it was established by Alexander Reid, on a plateau above the River Spey in north-east Scotland.

In 2018, The Macallan opened a new chapter in its history with the launch of its award-winning Speyside distillery. Designed by internationally acclaimed architects to promote sustainability, the building takes inspiration from the surrounding ancient Scottish hills. It stands nearby Easter Elchies House, the Highland Manor built in 1700 which is The Macallan’s spiritual home and remains the heartbeat of The Macallan’s beautiful 485-acre Estate.

About Sir Peter BlakeSir Peter Blake (b. 1932, Dartford, Kent) is a British painter, sculptor, draughtsman and printmaker. He is known as one of the leading figures of British Pop art. Peter Blake studied at Gravesend School of Art before being accepted into the Royal College of Art, London, where he studied alongside other key British Pop artists, David Hockney, R.B. Kitaj, Joe Tilson, Allen Jones, Peter Phillips and Derek Boshier. After graduating from the Royal College of Art in 1956, Blake began to appropriate pop culture icons and advertising imagery to create homages to the likes of Marilyn Monroe, Brigitte Bardot, Elvis Presley and professional wrestlers. His iconic 1961 ‘Self-portrait with Badges’, in the Tate Collection, shows Blake holding an Elvis album, dressed in American jeans, Converse trainers, and baseball badges; here is the artist as a genuine fan. In other works, he composes assemblages of found objects with humorous allusions to art history and childhood fantasies. In 1967 he designed the iconic album cover for The Beatles’ Sgt. Pepper’s Lonely Hearts Club Band in his distinctive style of collage. Blake continues to be associated with the music world by designing album covers. In 1975 Blake co-founded the Brotherhood of Ruralists, a group of artists who moved to Somerset to build an artistic community outside of the city.

After completing his National Service with the RAF, he received the Leverhulme Research Award to study popular art and travelled through Europe 1956–7. Blake’s first solo exhibition was held in 1962 at Portal Gallery, London; solo shows followed at Robert Fraser Gallery, London (1965) and at Leslie Waddington Prints, London (1969). His first retrospective exhibition was held in 1969 at the City Art Gallery, Bristol. Subsequent retrospectives were held in 1973 at the Stedelijk Museum, Amsterdam, touring to Hamburg and Brussels and the Tate Gallery in 1983. In 1994 he was made the Third Associate Artist of the National Gallery, London. Peter Blake was elected a member of the Royal Academy in 1981, and was knighted in 2002. In 2007 the Tate Liverpool held a major retrospective of Peter Blake’s work which toured to the Museo de Bellas Artes, Bilbao, Spain in 2008. In 2010, Lund Humphries published Peter Blake: One Man Show, a comprehensive monograph by Marco Livingstone.

About Sotheby’sEstablished in 1744, Sotheby’s is the world’s premier destination for art and luxury. Synonymous with innovation, Sotheby’s promotes access, connoisseurship and preservation of fine art and rare objects through auctions, private sales and retail locations. Our trusted global marketplace is supported by a network of specialists spanning 40 countries and 50 categories, which include Contemporary Art, Modern and Impressionist Art, Jewelry, Watches, and Wine and Spirits, among many others.

Sotheby’s Wine’s annual worldwide auction sales of wine and spirits totaled an outstanding $92 million in 2020, with over 15,000 lots sold across 41 sales – a nearly 50% increase in the number of auctions held in 2019. Over $60 million of wine and spirits were sold to online bidders in 2020 versus $28 million in 2019, with 85% of all lots offered finding online buyers. Demonstrating continued strength in Asia, Sotheby’s led the market in the region for the third consecutive year, with over 70% of the total bid amount in all Wine and Spirits sales attributed to collectors in Asia.

In addition to auction, Sotheby’s Wine launched a retail business in 2010. With a retail store located in Sotheby’s New York headquarters and e-commerce at www.sothebyswine.com, Sotheby’s Wine offers a carefully curated selection of wines from the world’s most prestigious producers and important regions. Expertly assembled by our experienced specialists, the selection is built upon lasting relationships with winemakers from across the globe, with bottles that are ready for immediate consumption, in addition to investment-worthy wines from highly sought-after vintages. A second retail location opened in Sotheby’s Hong Kong galleries in 2014.

Read the original article on Cision