12 Things You Should Know About Laphroaig

12 Things You Should Know About Laphroaig 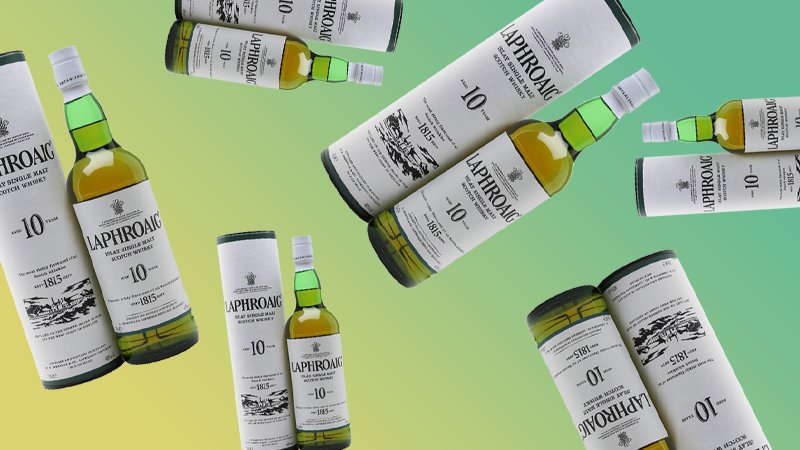 No, the name doesn’t mean “The Phroaig.” (We had to look that up.) In fact, what Laphroaig Scotch whisky ends up meaning to you depends entirely on your feelings about things like peat, smoke, salinity, and even brawn — you know, the kind of brawn that pushes thousands of pounds’ worth of malted barley across a dimly lit malting floor, because, Scotland.

Even for the peaty-weary, Laphroaig is worth exploring. Much more than a one-note smoke monster (that thing is still on the island from “Lost,” right?), Laphroaig has that complicated, stormy single malt tendency to seduce you slowly, and then aggressively (like, “Whoops, you’re tied to the bedposts and now we’re engaged,” aggressively).

But alas, we digress. Here are 12 things you need to know about Laphroaig before you say “I do” to a dram.

‘LAPHROAIG’ IS EASY TO PRONOUNCE.

It’s pronounced like this: la-froyg. But don’t take our word for it. Watch this seven-second video of esteemed Scottish actor, Commander of the Order of the British Empire, and recent Big Mac spokesperson Brian Cox tell you. (He does a bunch of Scotch pronunciation videos. Rumor has it, if you say all the Scotch brands in a row in front of a mirror in a dark bathroom, you’re probably drunk, so get some water.)

LAPHROAIG IS AN ISLAY (‘EYE-LAH’) SCOTCH.

Being an Islay Scotch means something. It’s like being a California raisin. Or an Italian hero. Place of origin matters here because Islay Scotches are believed to be from the birthplace of whisky in Scotland (brought, of course, by some kindly and proselytizing monks). These Scotches are generally peated, meaning the malted barley is dried over rich, fragrant peat smoke (see below). Other Islay Scotches include names like Ardbeg, Caol Ila, Bruichladdich, Bowmore, and, Ron Swanson-certified Lagavulin.

ITS USE OF LOCAL PEAT IS ULTRA-AUTHENTIC.

Laphroaig has various expressions — from the standard 10-year-old, to the oaked-up Quarter Cask (made with aged whisky aged again in a quarter, or smaller, cask, increasing oak contact), to an investment-level 30-year label that’ll cost over $1,000, which we advise only releasing to viewing family every other major holiday.

One thing all Laphroaig labels have in common? They’re all peated. In fact, the flagship 10-year expression is peated with local Islay peat, a further expression of place, since forest-less Islay has been using peat as a fuel source since always. That peat is also hand-harvested. Kaboom. A thousand authenticity points.

LAPHROAIG IS ITS OWN MALTSTER.

Unlike a blended Scotch (such as Chivas Regal), single-malt Scotch is made with malted barley from a single distillery. Malting is a laborious process, and one most large distilleries don’t do themselves. Laphroaig is an exception; it uses about 20 percent of its own malted barley in the total mash bill.

To “malt” barley, grain has to be spread out to germinate. The maltster is basically tricking the baby grain into thinking it’s time to grow into a new plant by providing moisture and warmth (big jerk move); and as enzymes turn the grain’s starches into more available sugars, we make booze instead of springtime (classic human move).

Why put all the effort into malting when it can be outsourced? With 205 years of seasoning, Laphroaig is pretty damn sure its kilns give a special, both literally and figuratively, “extra” creosote note to the finished product. (Laphroaig fans are known to crave this flavor.)

More bonus points: Laphroaig’s malting floor is effectively on the Atlantic Ocean, with windows and fans to draw in that coastal, saline breeze to wash all over the barley, so you get smoke and salt, which is a surprisingly delicate, teasing contrast. Like slapping someone you love, with a velvet glove.

Laphroaig is a proudly smoky Scotch, taking pains to impart more peat smoke before fully drying the barley. But as modern smokiness goes, Laphroaig is distinguished, rather than overpowering — a wisp from a dying (high-end) cigarette to some other Scotches’ flagrant tire fire smoke profiles.

Compare the 45 parts per million of smoky peat phenols in Laphroaig’s flagship to Octomore 7.4 at 167 ppm to the (admittedly “uber-experimental”) Bruichladdich Octomore 6.3 at 258 ppm (a ton—watch whiskey expert Horst Luening say “I do not dare to swallow!” here).

YOU CAN OWN A PIECE OF THE DISTILLERY.

Stewie Griffin knew what was up when he said, “It’s good to have land.” Except given the current/perpetual economic hellscape that pits housing prices against low wages against (#bestlaidplans) student debt, many of us won’t own any substantial hometown turf.

Luckily, Laphroig offers a very appealing alternative: Join the “Friends of Laphroaig” program, created in 1994, allowing whisky devotees to buy a square-foot plot of the distillery. Ownership of said plot earns you one dram of Laphroaig per annum if and when you visit your plot, which we’d assume you’d want to drink very formally, quite possibly wearing a monocle.

LAPHROAIG’S IAN HUNTER PIONEERED THE USE OF AMERICAN OAK.

Taking the reins in 1908, Ian Hunter was the last of the founding Johnston family to oversee Laphroaig. When he wasn’t out looking dashing with his dogs, Hunter did plenty to revolutionize Laphroaig, and Scotch whisky- making in general.

Under Hunter’s leadership, Laphroaig began selling Scotch in America, and introducing American white oak barrels into Laphroaig’s aging process. American oak is arguably more delicate than European varieties, allowing more of the Scotch’s native characteristics (such as peat) to shine, smoke, and sift through. Collectors, heads up: Hunter’s impact has just recently been honored as the first in a series of ultra-rare, ultra-aged whiskies, cleverly embedded into books, prison shank-style. Hunter’s is called “Ian Hunter’s Story,” has 30 years in the bottle at minimum, and costs on average over $,1000 a bottle.

Like, really, really loves it. Not only did Princes Charles, a.k.a. the Duke of Rothesay, award the distillery a Royal Warrant when he visited in 1994; he came back to celebrate his 60th birthday there in 2008. And in 2015, a kilted Charles returned to celebrate Laphroaig’s 200th birthday.

ONE ROYAL VISIT TO LAPHROIG BEGAN WITH DISASTER, AND ENDED WITH A TOUR.

Along the bromance of Prince Charles and Laphroaig there was a slight hiccup when the prince accidentally crashed his plane over the edge of the landing strip when visiting Laphroaig in 1994. Fortunately nobody was hurt — though HRH was said to have been going a bit fast— and Prince Charles straight-up just continued with the distillery tour, post-crash. (Though, per HRH, “It was not quite a crash,” as he told reporters, and because he’s a prince, he’s correct.)

LAPHROAIG WAS HOME TO THE FIRST FEMALE DISTILLERY MANAGER.

“Force of nature” is a better descriptor for Bessie Williamson, who got a summer job as a typist at Laphroaig in 1934, and was its manager and owner by 1954 (she inherited ownership from Ian Hunter). Even while she worked as Hunter’s right-hand person, Williamson proved invaluable to Laphroaig, which was effectively turned into an ammunition bunker as World War II shunted grain production to the front lines. Williamson kept the government from melting down her stills.

Once at the helm of the distillery, Williamson went on to preach the gospel of peated single malt in America, miraculously marketing a hulking, complex, sometimes downright ornery product to American palates that were just settling into the post-war comforts of Jell-O. No shock, as it did for Ian Hunter, Laphroaig released a special 25-year-old Bessie Williams rare bottling.

Among the tasting notes for Bessie’s bottle are such intimidating descriptors as “salty tar oil paste.” We prefer “coastal notes with peat sweetness and earthiness.” Speaking of, here’s a pretty great picture of Bessie with some sprouted barley.

Read the original article on VinePair