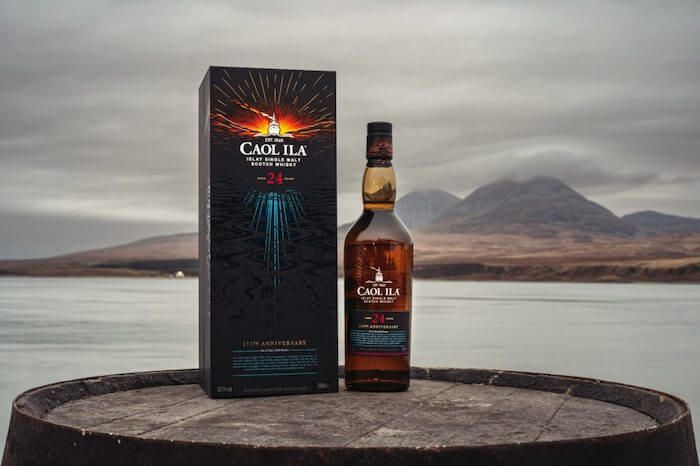 One of the oldest distilleries on the Scottish island of Islay, Caol Ila, celebrated its 175th anniversary last year, and a celebratory bottling is the fruit of that milestone.

Caol Ila, which is Gaelic for “The Sound of Islay,” recently released a limited-edition 24 Year Old single malt Scotch whisky, just as the distiller prepares to open a new visitor experience.

The anniversary bottling, the distiller’s notes proclaim, is an Islay single malt with fresh fruits on the nose, followed by a peaty whisper of smoke. On the palate, sweetness is balanced with a hint of salt and a slight kick of black pepper. A warm finish features soft spice, cocoa, and the lingering smoke of campfire embers

Sam Hale, distillery manager for Caol Ila, said in a prepared statement, “It’s fantastic to celebrate over 175 years of Caol Ila with a brilliant bottle that showcases the distillery’s characteristic smoky smoothness and sweet sea air aromas. It honors the long-standing legacy of Caol Ila as Islay’s hidden treasure and I’m sure it will be a hit with our fans, who we look forward to welcoming when we open the doors to our re-imagined visitor experience.”

Summer of 2022, Caol Ila will be the fourth and final of the Four Corners distilleries to open after undergoing a major renovation as part of Diageo’s £185-million investment into its Scotch whisky visitor experiences.

This follows the openings of Glenkinchie in 2020, and Cardhu, Clynelish, and the Johnnie Walker Princes Street experience in Edinburgh last year.

The four distilleries represent the Four Corners of Scotland and the regional variations of Lowland (Glenkinchie), Speyside (Cardhu), Islay (Caol Ila) and Highland (Clynelish) integral to the whisky blending at the heart of Johnnie Walker.

Together, the visitor experiences will create a Johnnie Walker tour of Scotland, where visitors to the capital city can travel to Scotland’s rural communities and meet those who craft one of the world’s best selling whiskies.

Caol Ila 24 Year Old Single Malt Scotch whisky is available now at selected specialist retailers and at Islay’s Lagavulin Distillery (an allocation of bottles will be sold at Lagavulin for visitors to Islay as Caol Ila is currently closed to the public due to construction ahead of its reopening later this year).

The special bottling has a suggested retail price of £295 per 70cl, comes bottled at 52.1% ABV, and there are 3,000 total bottles available.