Behind The Scenes of Caol Ila Islay Whisky

Behind The Scenes of Caol Ila Islay Whisky 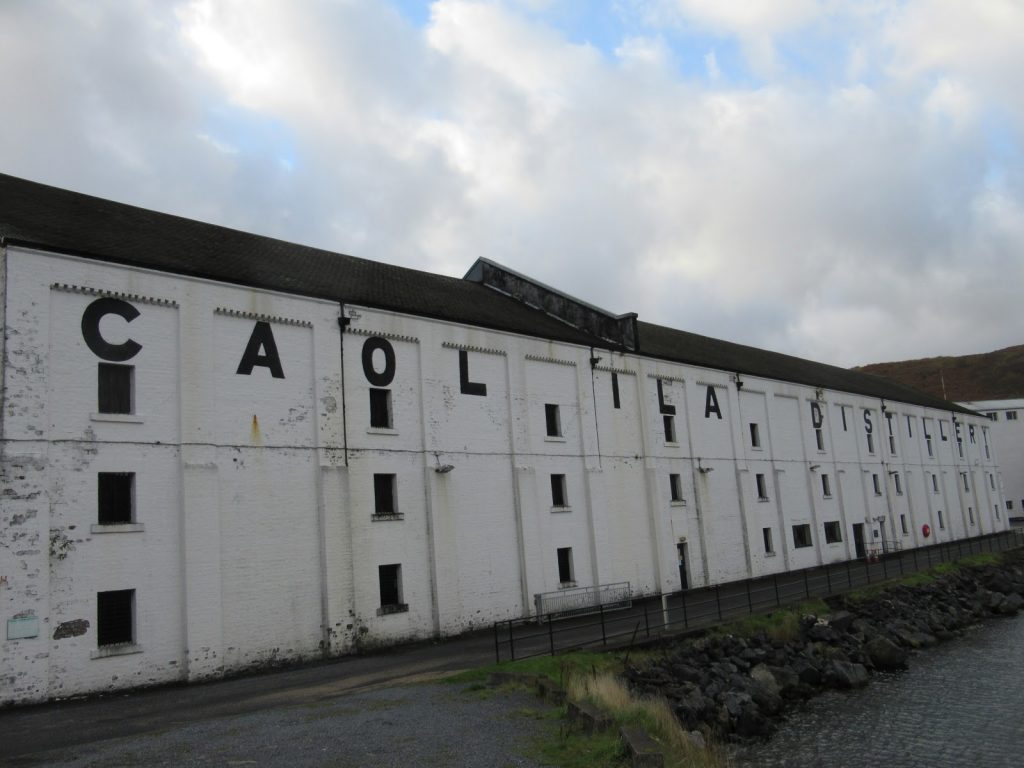 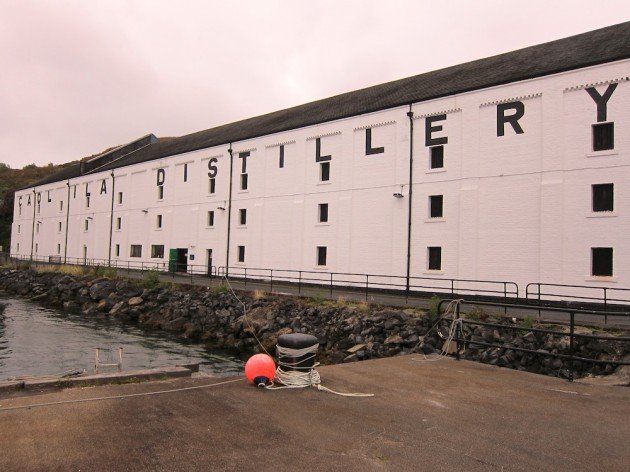 There are a number of whisky producers in Scotland that you’ve never heard of. It’s not that they are especially small or obscure distilleries – you haven’t heard about them because their sole purpose is to produce whisky to be used in blended whisky products. The biggest of these blended products is Johnnie Walker, with Johnnie Walker Red and Black pulling an unfathomable amount of whisky from over forty different distilleries. The distilleries that produce mainly single malted whisky for a blend and don’t really release their own whisky to the public are often referred to as “hidden distilleries.” Caol Ila is unique in this space because it straddles the line between hidden distillery and a scotch whisky brand. 95% of what Caol Ila produces is used in Johnnie Walker’s blends, most notably for Johnnie Walker Black and to an even greater extent Johnnie Walker Double Black.

What’s great about Caol Ila is that even though the lion’s share of what they produce serves the nearly unquenchable thirst of Johnnie Walker, they still manage to pull 5% of their spirit, age it, and release it under the Caol Ila brand. Caol Ila is produced to an exacting specification to fit neatly into Johnnie Walker. In Johnnie Walker Black, Caol Ila not only provides a light smoke flavor but its medicinal notes help act like bitters in a cocktail, binding the sweet and strong elements. After Cardhu, Caol Ila is one of the most important malts in Johnnie Walker Black and is essential for the smokey character of Johnnie Walker Double Back. As a result, the pressure for Caol Ila to produce high volumes of whisky is fairly intense. This past year the distillery was upgraded to nearly double their capacity, from 3 1/2 million liters of single malt produced a year to a staggering 6 1/2 million liters, making it the largest producer of whisky on Islay. 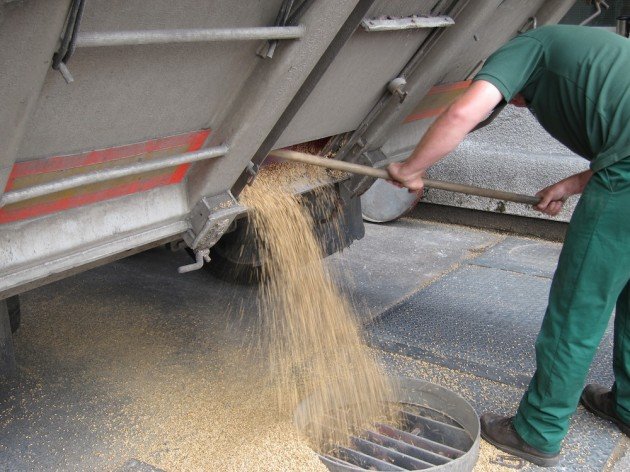 With such high demands put on it, Caol Ila could easily transition to a much more industrialized process. Many of the world’s best selling spirits are produced to meet the demand needs first and foremost. Caol Ila has managed to maintain much of its traditional distilling practices while incorporating more modern elements to help make them able to produce such high volumes. As with all single malt whisky, everything at Caol Ila begins with barley. Caol Ila pulls its malted barley from Port Ellen Maltings. Located on the grounds of the famous (and now closed) Port Ellen Distillery, the Port Ellen Maltings takes in grain, malts it (which is basically sprouting it), dries it with peat fires (to impart the signature Islay smokiness), and then delivers it to the Caol Ila Distillery. The malted barley used at Caol Ila is exactly the same as that for Lagavulin, even down to the level of peating, which is 35 ppm (parts per million). 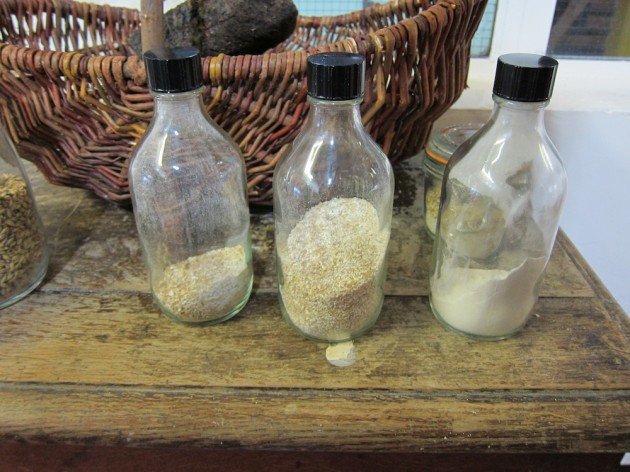 In many ways the process of making single malt whisky at Caol Ila is the same as at Lagavulin. The malted grain is milled through a grain mill which breaks down the malted barley into a grist comprised of three parts: husk, grits, and flour. Each of these elements play an important role in the process. Malting grain helps free the convertible carbohydrates and helps prepare the natural enzymes that are found in the husks of the grain. The milling breaks the grain down into about 70% husk, 20% grits, and 10% flour. This mix is important because the ratio is key to properly converting the grain’s carbohydrates into fermentable sugar.

Once ground, the malt is put in a giant mash tun where warm water is added to the mix to activate the enzymes naturally found in the husk. These enzymes break down the grist and covert them from a carbohydrate into a fermentable sugar. There are two stages in the mash tun where different temperatures of water are added to help fully cultivate and capture the fermentable sugar. This process also creates somewhat of a barley tea, and the peat that has been embedded into the husks when the barley was malted is extracted into the water. The liquid from the mash tun is drained and called the worts. One of the major upgrades to the Caol Ila distillery this past year was the installation of a new high efficiency mash tun which both heats and cools more efficiently, enabling Caol Ila to run more batches of grain per week. Caol Ila now goes through a staggering 338 tons of malt per week. 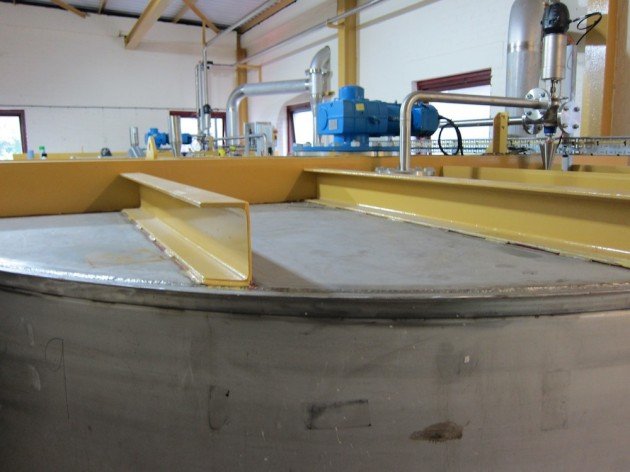 To accommodate the increased production of wort, Caol Ila also added two more giant stainless steel fermenters. These two join six other existing wood fermenters. There’s a fair bit of disagreement about the difference between stainless steel and wood fermenters. Some feel that bacteria that can permeate into the fibers of the wood can have a positive impact on the fermentation process, especially late in the process when the yeast has consumed a majority of the available sugars. Others claim that over the years the barrels develop a coating which eliminates the transfer between the fermenting wort and the wood fermenter. The subtle differences between the two become very difficult to identify when a distillery like Caol Ila uses a combination of fermenter types. At Caol Ila the fermentation time is quite long at around 60 hours, which is considerably longer than Lagavulin, which uses the same peated malt.

After fermentation, the wort and yeast produce the wash, a smokey fermented barley liquid that is often referred to as ‘distiller’s beer’. This wash is put into one of three wash stills where it’s distilled and almost all the distillable alcohol is captured. This spirit is transferred over to one of three spirit stills where it’s redistilled and separated with the fore shots (or heads) and tails, which are combined as the feints, added back into the wash stills, and then redistilled. During the spirit distillation the hearts, or middle cut, are pulled out as new make spirit, the raw ingredient that, with age, becomes single malt whisky. It’s the distilling process that really enables each distillery to cultivate and express their own style. It’s how Lagavulin and Caol Ila can start with the same peated barley and end up with very different whiskies. 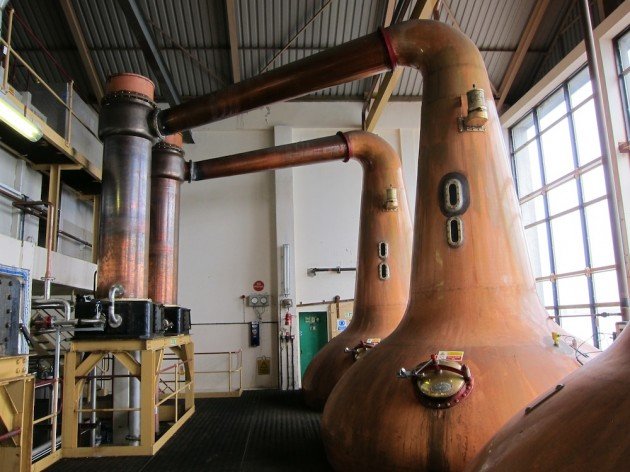 Caol Ila puts less spirit in their still for each batch than Lagavulin, where their stills are filled as high as 90% full. By filling their stills only 50-60%, Caol Ila gives the vapor created during the distilling process, which condenses to become whisky, more contact with the copper surface of the still. Copper is an essential element in the process of making Scotch whisky, as it pulls out impurities and elements from the whisky. The more contact a spirit has with copper during distilling, the less of the more volatile elements will end up in the final whisky. With less copper contact, Lagavulin creates a smokier whisky than Caol Ila, using the same basic ingredients.

After distillation the new make spirit at Caol Ila is loaded onto a tanker truck and shipped to the main island of Scotland where it is put into barrel and then aged. There’s a fair amount of contention about the impact of aging something in Islay versus aging it on the main island of Scotland. To that end, Caol Ila distillery manager Billy Stitchell points out that no point of Scotland is more than 40 miles from the ocean and so the entire island is impacted by marine air and conditions. As with most Scotch Whisky, Caol Ila uses barrels which have been previously used to make bourbon. These bourbon casks are filled with grain spirit and left sitting for 3 years before they are dumped out and new make whisky spirit is added and aged. 95% of the whisky that is added to these barrels will be used to help create Johnnie Walker, the other 5% may be used to bottle Caol Ila’s branded releases. 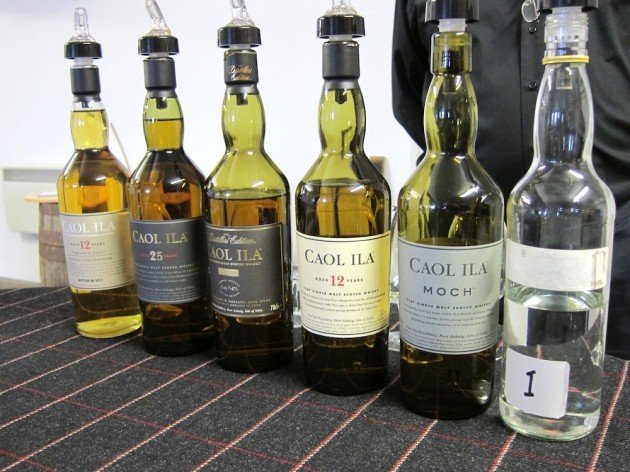 There are very few regular Caol Ila whiskies available in the United States. The most common Caol Ila that you’ll find in the US is Caol Ila 12 year, and luckily it’s also one of the best. Caol Ila 12 year presents peat and smoke differently from many of the other Islay whiskies produced. At 12 years, Caol Ila is as flavorful and integrated as much older spirits. In addition to the peat smoke which is present in the whisky, Caol Ila 12 also has a soft quality to it, mixing a medicinal iodine note with sweet vanilla along with barley cereal grains and salt. Caol Ila 12 also has a superb finish that helps make it stand out among the other Caol Ila releases.

Other releases from Caol Ila can be very hard to come by, many of which are only released through Diageo’s Classic Malt Selection series which comes out each fall in very limited release. The 2012 release in this space is a unique unpeated 12 year old whisky. Caol Ila used to produce unpeated whisky in a labor intensive process that involved extensive cleaning and preparation so that the whisky wasn’t cross contaminated with peat from their main production. Although Caol Ila no longer produces unpeated whisky, this release comes from stock of previously produced whisky. Unpeated Caol Ila is an entirely different whisky. Caol Ila Unpeated 12 year, released at 64% abv/ 128 proof, is a strong whisky with monster honey, shortbread, vanilla, chocolate, and paste on the nose. The whisky opens sweet with the honeyed vanilla and quickly broadens to a nice chocolate note which carries through the mid palate. In the mid palate these flavors are joined by toffee and salted grains with strong heat and spice that blast in at the end of the mid palate and roll through the finish. Caol Ila is fairly sensitive to water, so adding water should only be done in small amounts, but for the unpeated it really softens things and opens it up. 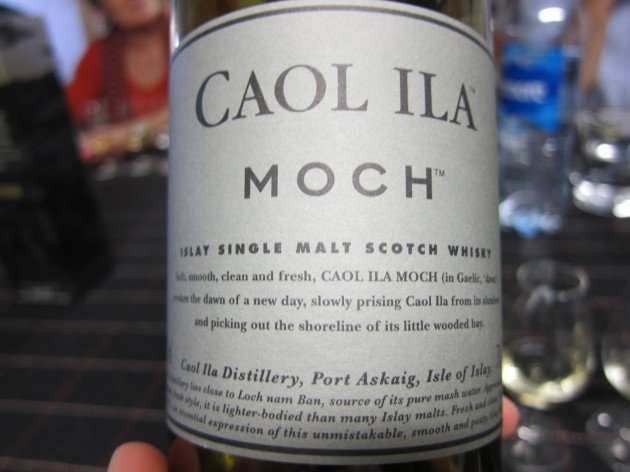 Other products released from Caol Ila but are hard to get in the United States include Moch, a young, sweeter, more cereal grain forward expression of Caol Ila with a very dry finish. Caol Ila 25, less smoky than Caol Ila 12, is slightly less complex and less integrated. The Caol Ila 25 is an excellent example that older whisky isn’t always better whisky. Caol Ila also releases a distiller’s edition finished in muscatel wine barrels. Caol Ila 18 year used to be available but has since been pulled from the market.

The real star of the Caol Ila family in the US is Caol Ila 12 which is readily available and provides a real jumping off point for Johnnie Walker Black and Double Black drinkers to begin exploring the world of single malt whiskies. Caol Ila is also a nice introduction to the universe of Islay peaked whiskies. The smoke and peat in Caol Ila is softer and well integrated. It’s not the monster peat smoke from Laproaigh or power punch of Ardbeg, both of which are excellent whiskies but may be a too bold of a starting point for people who typically enjoy only blended whisky.

Caol Ila provides an interesting peek into the world of Johnnie Walker and gives the unique opportunity to taste the kind of spirit that comes from many of the ‘hidden distilleries.’ For drinkers who really enjoy the smoky quality of Johnnie Walker, it’s a true revelation and may be the starting point to an adventure of discovery through the vast and varied world of single malt whisky.