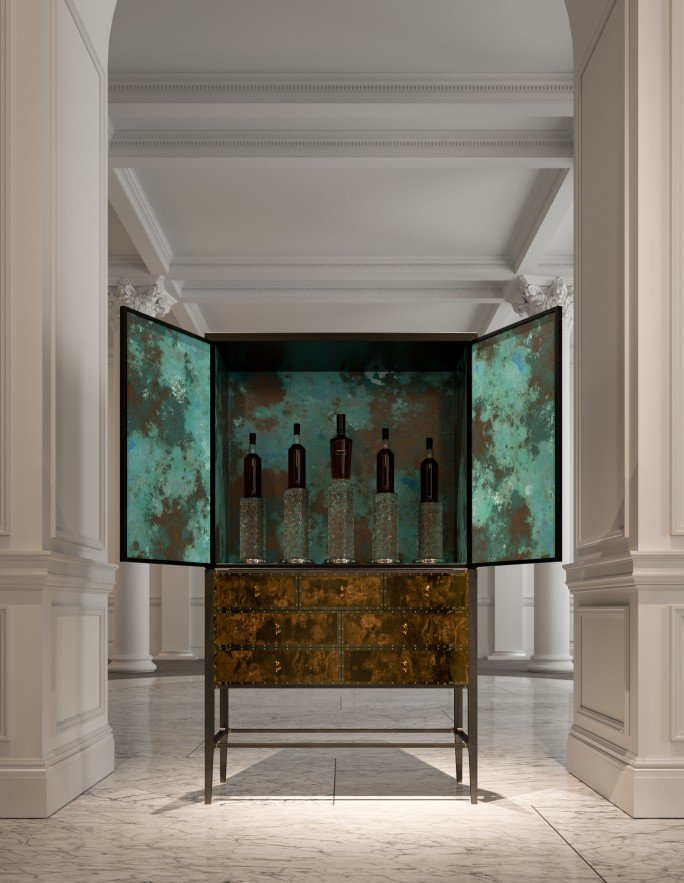 Twenty-seven years after its first release, Black Bowmore has become legendary within whisky circles, both as a hallmark of the distillery’s house style and as a highly desirable collector’s item. Next year, Sotheby’s – in partnership with Bowmore – will offer a rare opportunity to acquire the complete Black Bowmore single malt whisky collection direct from the Bowmore distillery. Five archive bottles of Black Bowmore, spanning 1993 to 2016, presented in a truly unique bespoke piece of furniture created by award-winning craftsman John Galvin, will be offered by Sotheby’s in Hong Kong in the spring of 2021. Estimated in the region of HK$4,000,000 (US$500,000 / £400,000), the Black Bowmore ‘Archive Cabinet’ will form the centrepiece of an auction of Finest & Rarest Wines and Spirits. The winning bidder will be invited to the Bowmore distillery for a tasting of Bowmore’s rarest and oldest single malts, with proceeds from the sale donated to an Islay charity, further details to be revealed in due course.

“Black Bowmore is one of my personal favourite whiskies and a dram I have been lucky enough to try on a number of occasions. Its value has increased exponentially over the years, which can be attributed to its undeniable quality and, now that so many bottles have been consumed, its newfound rarity. We are thrilled to partner with Bowmore for this landmark offering in the world of collectible whisky.”

“Since the expansion of our spirits business last year, we have seen enormous growth in the global demand for whisky, particularly in Asia. Having achieved ‘first growth’ status amongst a number of single malt producers, Bowmore has become increasingly collectible. The Black Bowmore ‘archive’ represents a pinnacle in the history of the distillery, marrying five iterations of a classic whisky with the most stunning of designs in which to house them.”

“Black Bowmore truly is the jewel in our crown and it takes its rightful place in the distillery’s history for firmly putting Bowmore on the map as an iconic, collectable whisky. This full collection of five Black Bowmore bottlings is spectacular, made even more special by the cabinet within which it is beautifully housed. Each element of the cabinet comes from our home; from the workings of the distillery preserving time gone by. This exceptional detail not only reflects the craftsmanship inherent in Bowmore, but makes this unique masterpiece rooted in our Islay home. This means whoever buys this not only owns some of our spirit’s history, but also actual elements of the distillery’s production history.” 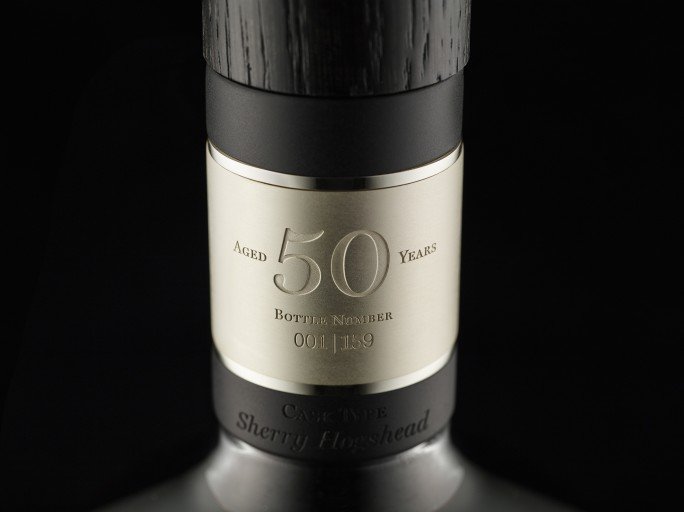 Black Bowmore was distilled in 1964 and the spirit filled into oak casks previously used for maturing sweet Oloroso sherry and transferred to the No. 1 vaults at Scotland’s oldest maturation warehouse. Hidden in a special location, this was the perfect environment for long maturation. Generations of skilled distillery men oversaw the casks slumbering in their secret location, whilst over the course of fifty years Master distillers perfected the liquid laying within. 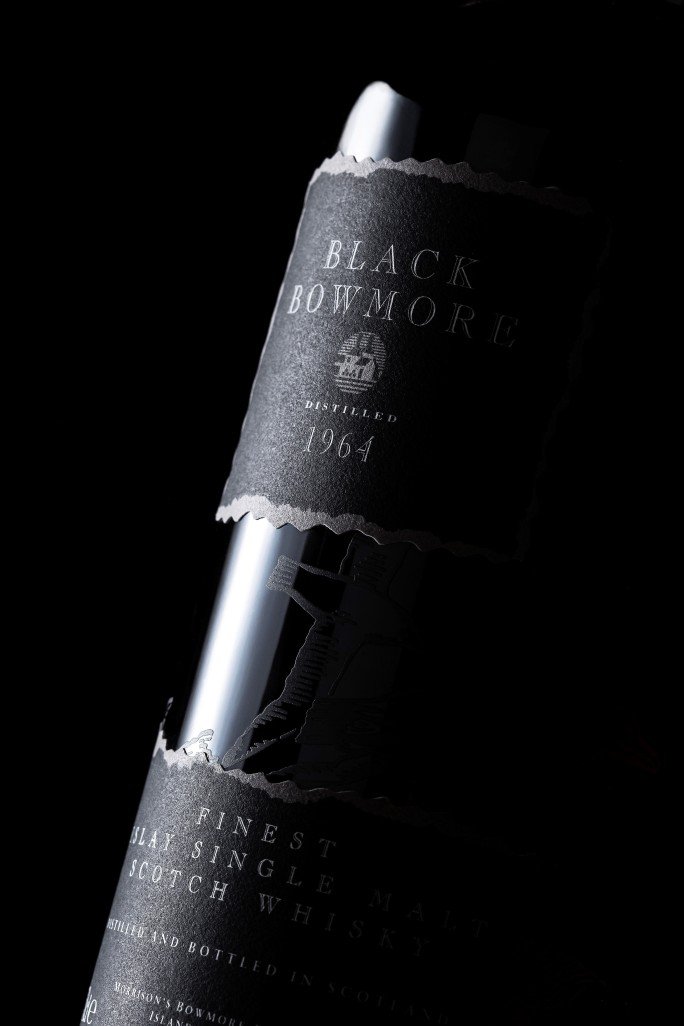 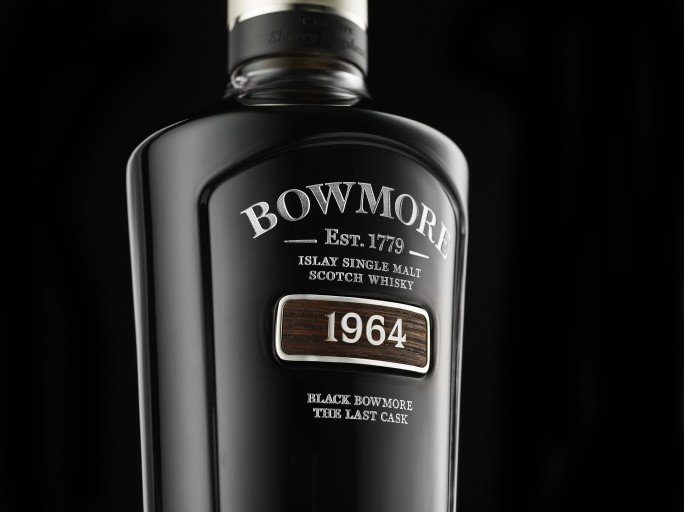 Initially sold for £100, “Bowmore Black” became one of the most sought-after whiskies in the world for its tropical fruit flavour. In 2020, its status is legendary – a whisky that defies expectation and offers an experience like no other, in its alignment of concentration of colour and fragrance, intensity and subtlety, balanced smoke and fruit. 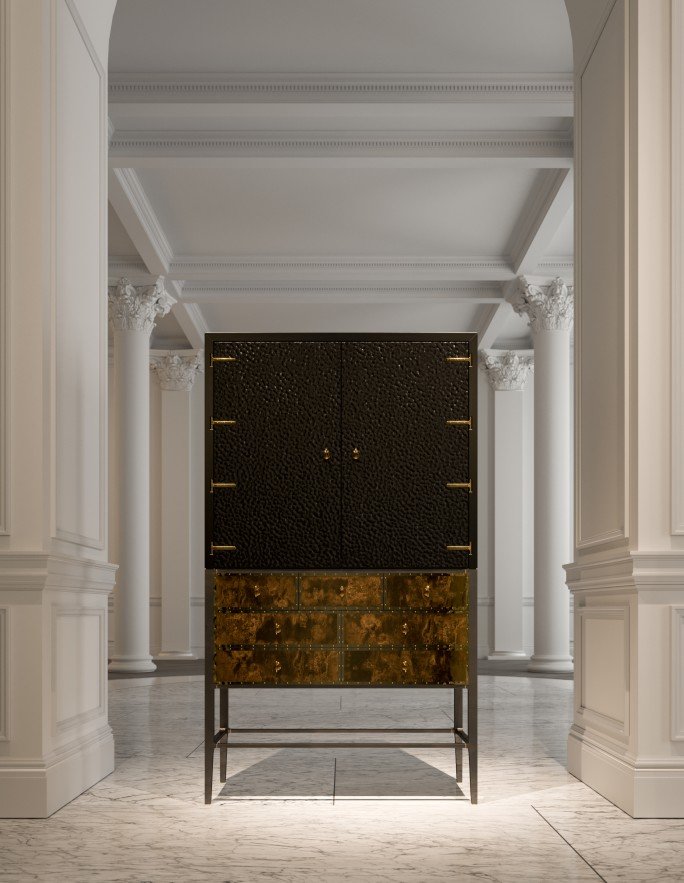 The one-of-a-kind handcrafted archive cabinet showcases authentic items and materials from the Bowmore distillery, connected to the legend of “black”. An original Bowmore Spirits safe was used in its construction, making the cabinet a completely one-off piece never to be replicated.

Placed inside on handblown glass pillars, each in varying heights corresponding to the age of the whiskies, the bottles are showcased to spectacular effect. The front of the pillars are highly polished, to create a vertical window to the inside of each pillar that reveals bubbles running vertically. Capturing the passage of time, the bubbles at the bottom are crystal clear to represent the newly made spirit slowly changing colour from yellow, dark red brown and finally black.

Once the exterior of the cabinet had been carved to mimic patterns in sand created by the movement of water rushing out to sea at low tide, an ancient Japanese technique was used to char its surface to resemble the inside of a cask. Featuring Scottish oak, custom cask solid bronze, and drawers constructed from the original pine wash back staves and brass whisky safe sourced from the distillery, the cabinet has been handcrafted at every stage of its production.

This unique lot will also include a one-off book which details the journey of Black Bowmore over its five releases and the creation of the cabinet. 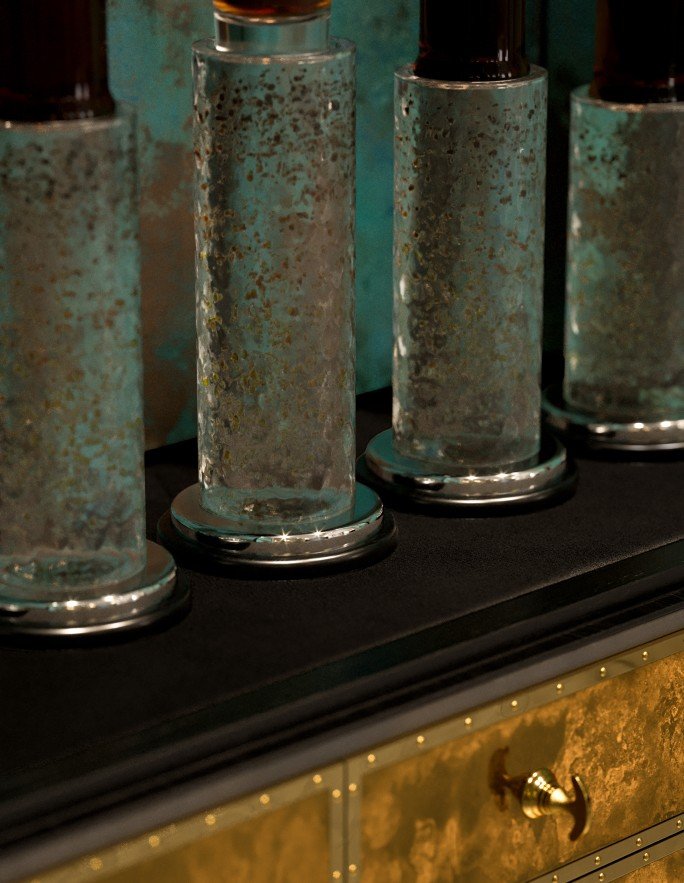 Notes to editors
A complete distillery owned collection of Black Bowmore from first release to last (1993-2016):

About Sotheby’s Wine
Sotheby’s Wine’s annual worldwide sales in 2019 significantly exceeded $100 million for the second consecutive year, led by a 20% increase in auction sales to a total of $118 million – the highest-ever annual total in Sotheby’s history.

Sotheby’s Wine, with a store located within the auction house’s worldwide headquarters on New York’s Upper East Side, offers a carefully curated selection of wines from the world’s most prestigious producers and important regions. Expertly assembled by Sotheby’s’ experienced specialists, the ever-evolving selection is built upon lasting relationships with winemakers from across the globe, with prices beginning at just $13.95. With bottles that are ready for immediate consumption, in addition to investment-worthy wines from highly sought-after vintages, each wine is chosen for its expression of its region and value for money. Each bottle selected by Sotheby’s specialist team must pass the brand’s signature “three-glass” tasting guideline, meaning that the tasters must like it enough to want to drink three glasses, or the standard amount enjoyed when sharing a bottle.

About Bowmore
Founded in 1779, Bowmore® is the oldest distillery on Islay. Our maturation warehouse is the oldest in the world and our handcrafted single malt whisky is defined by time and inspired by its home place.

Time is defining at Bowmore® and we tirelessly harness the power of time to shape our whiskies. Our distillery’s adherence to traditional production methods helps to shape the character of our fruity and smoky single malts. Today, we are amongst one of a few distilleries which still produces its own floor malted barley, hand-turned by a traditional wooden malt shovel and hand drawn machinery. Water for the whiskies is specially drawn from the Laggan River, with its rich peaty overtones – the same Islay peat that fires the malt-drying kiln.

Bowmore® Distillery’s proximity to the sea is also vital in determining the final character of its spirit and gives a hint of sea air to the character. The legendary Bowmore® No. 1 Vaults is where most of the whiskies spend their long lives resting quietly in the cool, dark, damp cellars below sea level, oblivious to the waves thrashing the vault’s sea-facing wall.

Matured in oak casks, previously used for bourbon, sherry or claret, over time developing rich and mellow flavours until the expertise of our whisky makers deems them ready for bottling. It is this combination of peat, barley, sea breeze, water, wood, people and tradition that makes Bowmore the exceptional single malt it is today.

Time is marked on each and every bottle of Bowmore, proudly and boldly as a marker of where and when each one’s journey began. This is our story of time. This is Bowmore; the Art of Time since 1779.

Read the original article on Sothbeys