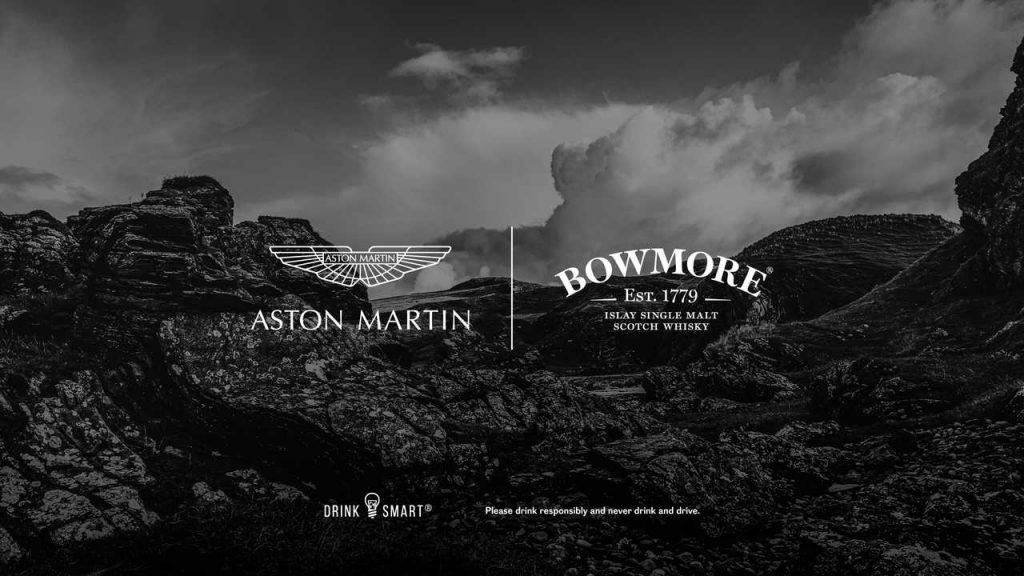 If you’re into cars and luxury Scotch whisky, Aston Martin and Islay’s Bowmore distillery have got you covered. The car company and iconic Islay whisky distillery have collaborated together to release a new £50,000 ($66,000) bottle of whisky, the 6th and latest edition of Black Bowmore, fully titled as Black Bowmore DB5 1964. This particular bottle is a celebration of Aston Martin’s iconic DB5 car, made famous by James Bond when it first appeared in 1964’s Goldfinger, the same year that the whisky was first laid down in the Bowmore warehouse for maturation. With only 25 bottles available, It will be available in late fall this year. If you want it, you’re going to need to race quickly to get ahold of this pricy whisky ahead of eager collectors.

There’s a reason for this. If you mention ‘Black Bowmore’ to a whisky collector (or anyone familiar and excited about rare bottles of Scotch whisky), the reaction you’ll get will never be indifference. It is a series of whiskies that represents not only how high end bottles rose in price so quickly within the last 20 years, but also a case study of how brands have responded to consumer demand over time, creating a new category of ultra-premium whiskies only available to the richest whisky fans and collectors as prices for collectable whisky bottles began to skyrocket on auction sites.

Prized for the rich flavors that come from the highest quality sherry casks, Black Bowmore was first released as a limited edition 29 year old whisky in 1993 for a then-expensive tag of £80 ($110). The name came from the dark color of the whisky itself. It has now become a jewel in many a serious whisky collection, with prices currently fetching closer to $20,000 for a bottle.

There have been four more editions released since then. The 2nd and 3rd editions of Black Bowmore are almost as prized as the first (they tend to sell between $8,000-15,000 on the auction sites), and were released at similar price points back in the day in 1994 and 1995 respectively. With the 2007 release of the fourth edition, things began to change. By this point the whiskies were in high demand, the first whisky auction sites began emerging, and this particular 42 year old bottle cost £2,400 ($3,200).

When I had the chance to try the fifth edition in 2016, the liquid was bottled at 50 years old, and priced at $19,600 with only 159 bottles available. I was informed emphatically at the time that there would be no more Black Bowmore releases as well. Following the announcement of Bowmore’s collaboration with Aston Martin last year to work on new bottlings and experiences, it looks like the distillery decided to change course.

For this extremely rare ‘DB5’ edition, there’s a couple hints with the information provided on the bottle that might excite collectors. Though this liquid was originally distilled in 1964 (like all previous editions), it’s 31 years old, rather than 50 years old like the fifth edition, meaning that the age is similar to the iconic first three releases. Furthermore, the whisky comes from a cask of Williams & Humbert Walnut Brown, which held sweet oloroso sherry in a previous life. This is the same type of cask that rumor has it provided the liquid for that first Black Bowmore release.

So in this case, hardcore and moneyed Bowmore fans are being provided with a tantalizing if expensive chance to try something that in theory should be pretty similar in profile to the original three editions. Given today’s market, little wonder that the price is so high.

So how does it taste? I had the luck of receiving a sample from the distillery and got to try it.

The nose is deep, resinous, and extremely velvety. Prunes, orange marmalade and raspberries are given depth by leather, liquorice, and lightly roasted coffee, along with a gentle element of Vic’s Vaporub and eucalyptus that adds a certain freshness. The tannins and oak are present but step aside to allow everything else to come through beautifully.

To taste, the oak is more robust but not overwhelming here. It’s also very fruity, with peaches, mangoes and pineapples coming to the fore. Surrounding the fruitiness is a mix of spices and herbs including nutmeg, cinnamon, coriander, and mint. The texture is oily, resinous, and soft. Though Bowmore is a peated whisky, typical peaty notes barely register here. The finish is very oaky, with a bitterness similar to dark chocolate or a black coffee. It is most certainly a world class whisky, but nothing less would do given the price.

Is it worth $66,000 though? Probably, if those 25 bottles find happy buyers (which is likely). What’s clear is that by allying themselves with Aston Martin, Bowmore is taking the next step in helping make incredible Scotch whisky be more than just a luxury product to purchase, but an indispensable lifestyle choice for those who can afford it.