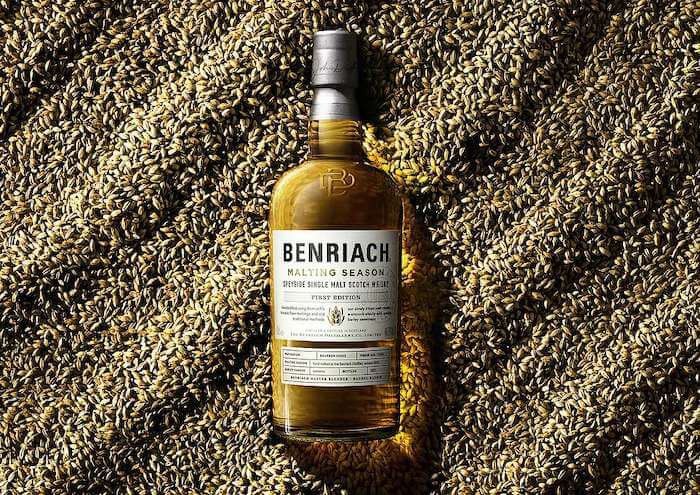 Editor’s Note: These whiskies were provided to us as review samples by the Benriach Distillery. This in no way, per our editorial policies, influenced the final outcome of this review. It should also be noted that by clicking the buy link towards the bottom of this review our site receives a small referral payment which helps to support, but not influence, our editorial and other costs.

While names such as Glenfiddich and The Glenlivet may come to mind when talking about Speyside single malt, Benriach Distillery offers a different vision of this region’s whisky. Founded in 1898 by John Duff, the distillery has gone through several iterations and has changed hands multiple times over the years. In 2015, it was awarded Global Distiller of the Year by the Icons of Whisky Awards, due in part to a creative approach exemplified in two recent releases from the distillery, Malting Season and Smoke Season.

Benriach is significant for continuing to malt a portion of its barley using floor malting, an age-old tradition that few distilleries still partake in. In a prepared statement, Global Brand Ambassador Stewart Buchanan says, “Passed from distiller to distiller throughout the generations, the floor malting process keeps a traditional part of the whisky making process alive with Benriach being one of only seven distilleries in Scotland to continue the practice of floor malting.”

Benriach Malting Season is made entirely from barley that has been floor-malted at the Benriach distillery. The creation of this first edition whisky begins with the barley being steeped in water. It is then spread across the malting room floor and turned by hand to aid in the germination. This is a process that requires personal attention from the malting team, who is also responsible for gathering the grain and transferring them to a kiln to create malt. After distillation, the whisky was matured in bourbon and virgin oak casks

While most Speyside single malt whisky is made from unpeated barley, Benriach is stepping outside of the norm with their release of Benriach Smoke Season. 100% peated malt is batch distilled and matured in first fill bourbon barrels. Utilizing Highland peat derived from ancient trees and heather, Smoke Season has an interesting flavor profile and will likely appeal to someone just stepping into the peated Scotch world.

Master Blender Dr. Rachel Barrie states that Smoke Season “is a special time of year in the distillery calendar, and this new addition gives both the whisky novice and connoisseur the opportunity to discover the uniquely rich, sweet and smoky character of Benriach single malt, crafted in Speyside, a whisky-making region rarely associated with peated malt.”

Palate: The whisky is smoky in the middle of the palate with a skunky finish–but a good skunky. It starts out sweet and bright, with rich fruity flavors and a distinct malty vibe.

Final Thoughts: I am not a huge fan of Scotch, but I have found that I enjoy some more than others. Benriach Malting Season was enjoyable, with a smokiness that doesn’t overwhelm my palate, and the perfect balance of sweetness, malt, and deep, well-rounded nuttiness on the finish.