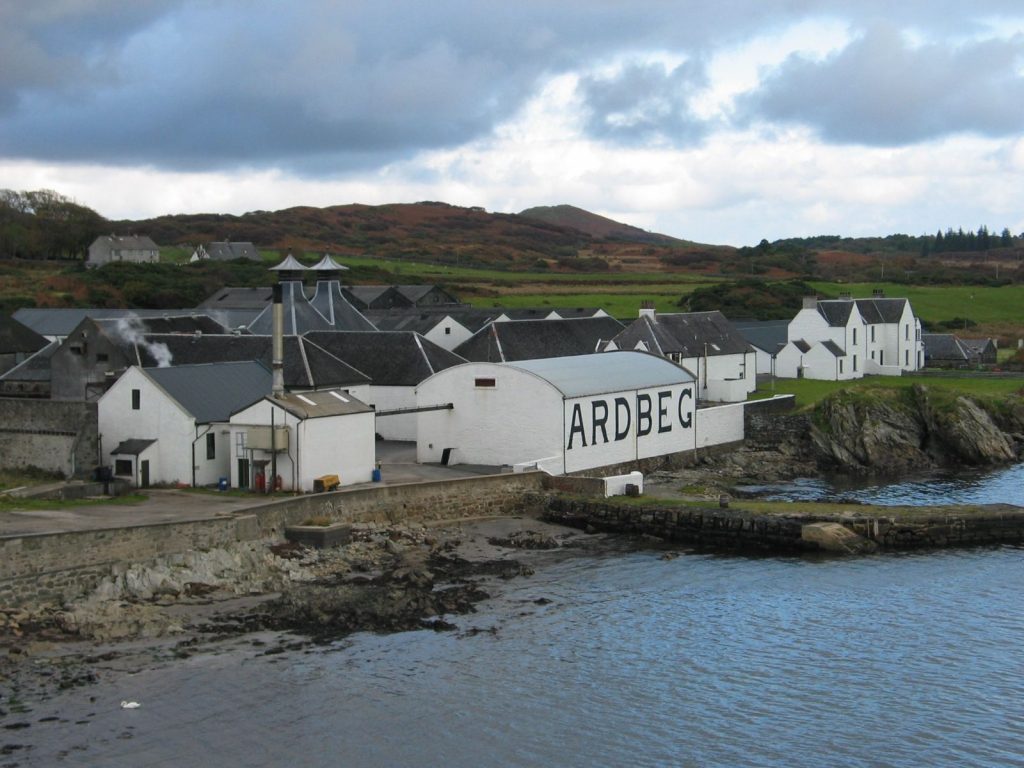 The last few months have a been a busy time at Ardbeg, one of Islay’s most iconic distilleries. Management transitions, a new still house and a spate of new releases have underscored the changes that have occurred.

First of all, Mickey Heads, the distillery’s General Manager since 2007, retired after a 13-year tenure that saw him oversee the distillation of dozens of new Ardbeg expressions. He was named Distiller of the Year in 2014, and Ardbeg won the title of International Whisky Competition (IWC) Distillery of the Year for three years in a row, from 2018 to 2020. In his dual role as the brand’s most well-traveled ambassador, he visited dozens of countries and spoke at innumerable events around the globe.

Heads is also the Chairman of the Ardbeg Committeea position he will retain post-retirement. The Committee is a worldwide organization of passionate Ardbeg devotees. Now numbering over 120,000 members, the Ardbeg Committee has proven itself to be a potent force in promoting the brand’s marketing, especially on social media. The distillery has rewarded Committee members with exclusive bottlings, typically at a higher alcoholic strength, than the commercial expressions. The distillery has also provided a venue for numerous weddings and celebrations for Committee members.

The distillery’s latest exclusive offering for Committee members is Arrrrrrrdbeg (yes, there are seven r(s) in the title). Intended to commemorate Mickey’s retirement from the distillery, it is Ardbeg’s first whisky matured entirely in ex-rye whisky casks. The distillery describes the expression as “a spicy mouthfeel igniting a blunderbuss of fruity flavors, while the long finish lingers with gentle smoke listing on the palate.” A complete tasting note is below. 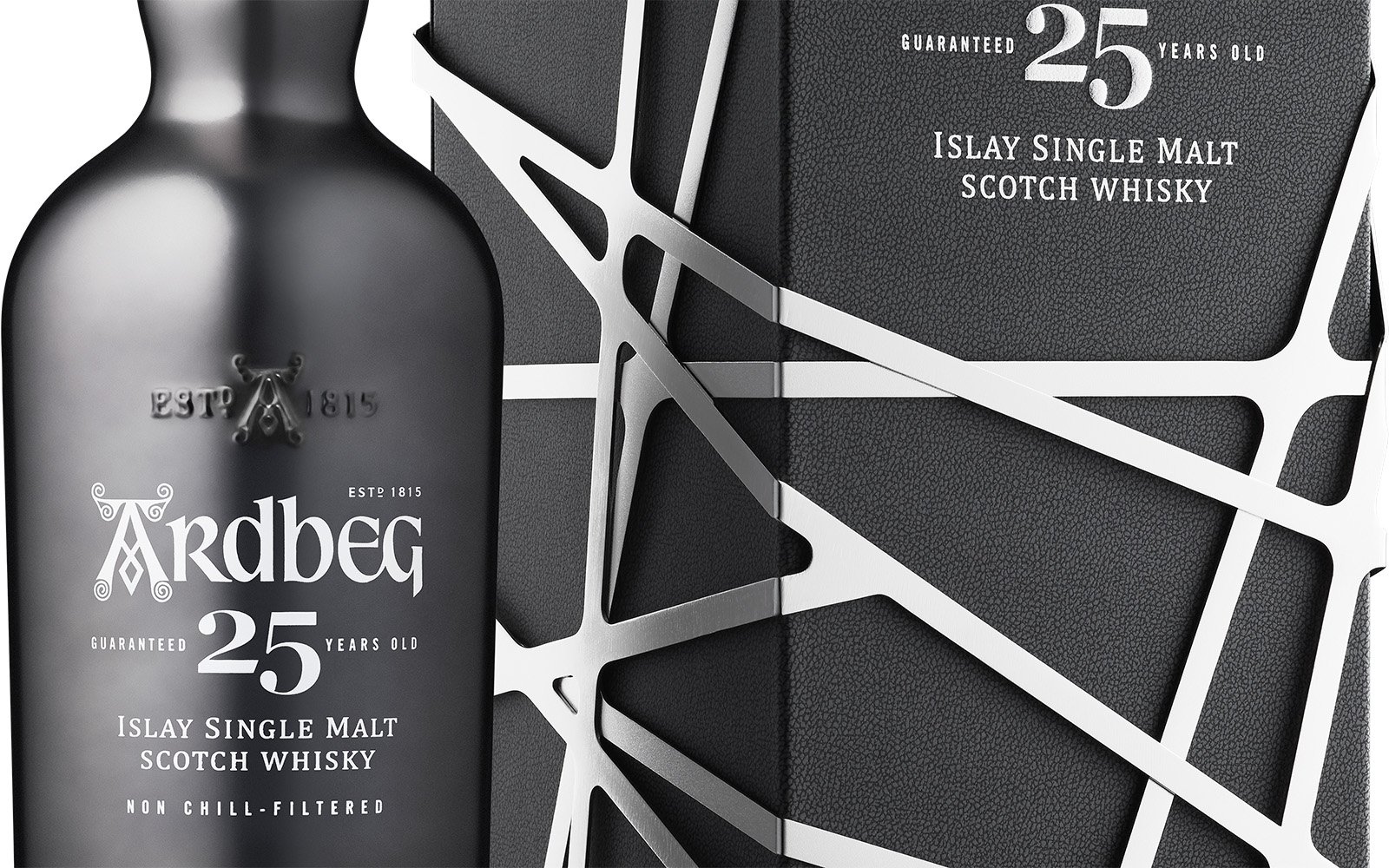 This is the second 25 YO expression from Ardbeg. The first being the Lord of the Isles release that was first issued in 2001. The latest release was matured exclusively in ex-bourbon casks.

On the nose, the whisky is immediately recognizable as an Ardbeg. It is very reminiscent of the Ardbeg 10, but milder, less forward and better integrated. On the nose, there is the cold peat smoke characteristic of Ardbeg, along with notes of charred wood and even a little roasted meat. There are fruit notes of lemon zest and candied orange, some apple, a bit of tropical fruit, especially banana, and a hint of peppermint.

On the palate, there are more of the same fruit notes as on the nose. There is a sweet, creamy quality to the whisky accompanied by notes of vanilla and caramel, and the anise/licorice note that is often found in Ardbeg expressions.

The finish is long, with notes of lemon zest, a mild but lingering pepperiness and the medicinal and brine notes characteristic of Ardbeg. 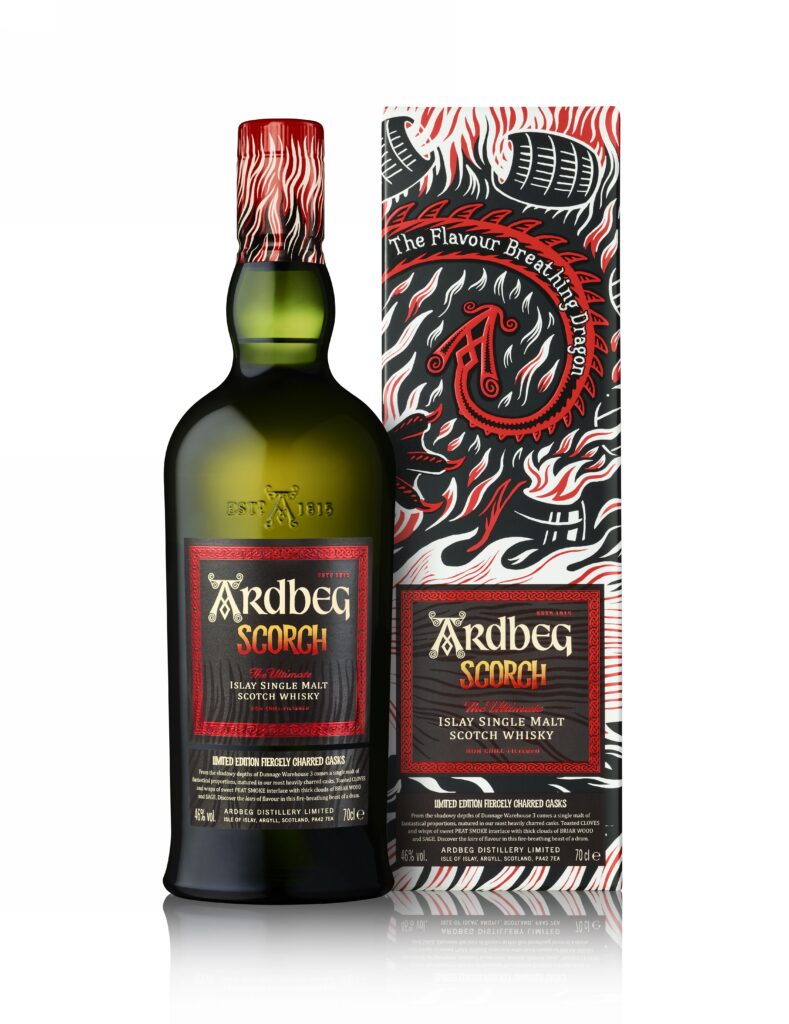 Ardbeg Scorch is matured in the distillery’s most heavily charred casks. The version for the Ardbeg Committee is bottled at 51.7% ABV, while the regular version is bottled at 46%.

According to Dr. Bill Lumsden, Ardbeg’s Director of Distilling and Whisky Creation:

Scorch is our tribute to the legendary dragon of Islay. By using our most heavily charred casks, we’ve created a fire-breathing beast of a dram.

On the nose, there is sweet note, an intense smoky and medicinal character, with pronounced aromas of charred wood and a bit of roasted barley. There is a bit of minerality, more cold steel than wet stone, along with a bit of creamy waxiness. There are some herbal and anise notes along, surprisingly, with some floral notes.

On the palate, the whisky is sweet and oily, with a noticeable palate weight and a buttery/creamy almost custard-like texture. The pronounced notes of smoke and charred wood on the nose, along with a bit of charred meat, carry over into the palate. There are additional notes of fruit, especially apple, and citrus, (lemon, orange mandarin and a bit of grapefruit), tropical fruits, especially mango and melon, anise/licorice and the expected medicinal elements. There are spice notes of cinnamon, ginger pepper, a bit of clove, as well as vanilla and brown sugar. As the whisky opens up a more distinctive chocolate note emerges.

The finish is long, with smoke and charred wood notes, a bit of tar and a lingering candied sweetness.