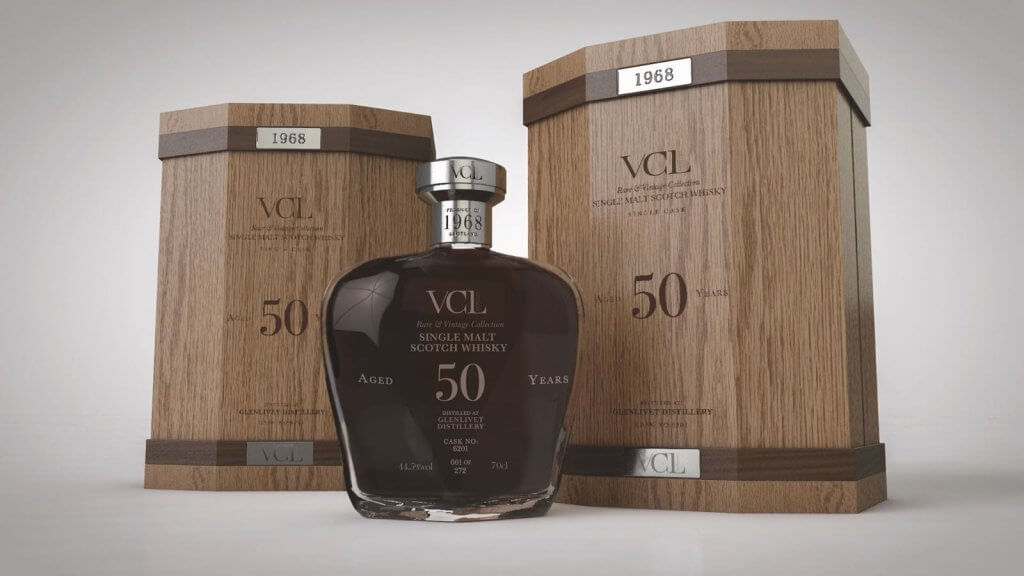 VCL Vintners are excited to announce the upcoming release of our latest independent bottling: a 50 year old Glenlivet. Supply is extremely limited, reserve your bottle now for free by registering your interest below.

Origins of an Empire

George Smith was the founder of The Glenlivet Distillery in 1822, when he was illicitly distilling in the hills and springs of the Livet valley for a couple of years. Despite it being illegal, when King George IV visited Scotland, he insisted on trying the infamous Glenlivet whisky. In 1824 George successfully obtained the first legal distillery licence in Scotland thanks to the Duke of Gordon.

With his licence in place and with an already established following for his whisky, George took advantage in the following years and word quickly spread overseas to America about the infamous Speyside spirit. The Americans developed a strong taste for the whisky, to the extent where even during prohibition they had to get their hands on it by any means possible.

The Rise of A Legend

During the American prohibition, a New Yorker called Abe Rosenberg became a very important figure in the Scotch whisky market. Despite alcohol being illegal Abe managed to get boats full of single malt onto American soil which of course gained him a hero status during the tough times. In the post prohibition era he imported thousands of bottles and gained great expertise and a sophisticated palate along the way. On the back of this he started to buy and collect vast amounts of barrels from Scotland’s top distilleries during the World War 2 period.

Abe passed away in 1994 and left behind an incredibly impressive collection of approximately 4000 single casks of the best single malts produced in Scotland over the past 100 years.

Abe Rosenberg’s influence on the global demand for Scotch is unprecedented. Importing the high-quality whisky in such high volumes to America stemmed the growth of Scotch to the furthest corners of the world. He helped set the successful foundations for  the booming whisky market we see today and due to his incredible dedication to single malt we are seeing the industry grow year in year out.

In order to commemorate the huge contributions we felt it was fitting to release a bottle of one of the most important casks remaining in his collection, a 50 year old Glenlivet distilled in 1968. Abe unfortunately never managed to bottle this cask, therefore we are extremely privileged to have the opportunity to do so ourselves. Due to the rarity and prestige of this particular barrel we knew it was vital to capture the history of Abe’s story as well as the founders’, George Smith.

The luxurious design achieved with this bottle and case mean that it is guaranteed to be a centrepiece to anyone’s whisky display or collection. The extreme attention to detail on both the bottle and case reflects the quality of the whisky they hold inside.

The case is hand carved wood by a master-craftsman at Croglin, a company that are renowned for combining traditional skills and finishing with the consistency of modern technology. The aesthetics of the case have the aura of high-end quality and are visually inspired by wooden whisky casks.

The bottle also has high attention to detail and is made by one of the finest Italian glass producers. The slight angular aspects of the bottle radiate the rich colours of the whisky in all directions and its depth is highlighted even from a quick glance. Once noticed, one cannot help themselves but to take a closer look. Every limited-edition bottle is finished off with bespoke silver neck-bands and seals which are meticulously created by one of Scotlands’ best silversmiths, Hayward & Scott.

When tasting this particular dram, you are treated to a very enticing flavour profile. The nose is a full bodied rich and sweet one, with an amalgamation of the spirit and the cask it has been aging in apparent from the start.

The taste is incredible and among one of the most impressive ever experienced. The foundation of vanilla only ever established in 50-year-old drams, is caressed with hints of creamy caramel and Iberian fruits.

The finish is just as noteworthy, with a lingering warmth and increased depth of sweetness the more you sip. If you are lucky enough to ever taste this, it will be a moment you will never forget and ultimately yearn for when tasting other whiskies. Unfortunately, you will struggle to find something as complex and unique as this particular dram anywhere else, ever again!

VCL Vintners will be releasing this exquisite and rare 50 year old Glenlivet shortly. Supply is extremely limited, reserve your bottle now for free by registering your interest below.

Hear from our clients

Bowmore’s Queen Cask 1980 Bottlings. A cask at Bowmore was filled in 1980 to commemorate Her Majesty the Queen’s tr… https://t.co/56uC8pKJPC

Fort William – Steeped In History. The Ben Nevis distillery is lucky enough to be located in an area that is steep… https://t.co/wuCO5Z3miJ

A Look At The Auchroisk Distillery. Read the full article on VCL vintners website https://t.co/wHSLBscpum • • • • •… https://t.co/XvDBJEVPBS

A Look At The Ardmore Distillery. Ardmore used its own malting and cooperage right until the 1970’s. The distillery… https://t.co/CkpnKum3xC